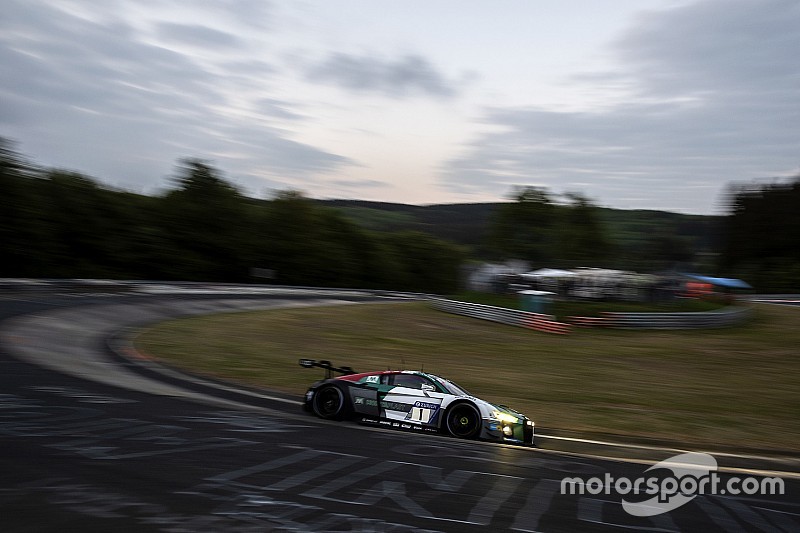 Kelvin van der Linde set the fastest time of the session on his first flying lap in the #1 Audi R8 LMS, posting a 8m18.914s on one of the few clear laps during the session - enough to beat Jeroen Bleekemolen in the #11 AutoArena Motorsport Mercedes-AMG GT3 by 0.379s.

Much of the three-hour session was affected by slow zones due to several incidents on the 25km track.

Jordan Tresson was one of the major casualties during the night qualifying session, as the Frenchman, driving the #101 Walkenhorst BMW M6 GT3, crashed in the run down from Fuchrohre to Adenauer Forst and caused a lengthy slow zone.

Tresson was released from the medical centre after the shunt but BMW Motorsport reported that the car was “heavily damaged” during the shunt.

With only half an hour left, the track was clear for some time, and Mike Rockenfeller took advantage to post the third-fastest time of the session in the #24 BWT Audi, 0.488s slower than Mies.

Jorg Bergmeister had set a fast lap in the first part of the session in the #17 Team75 Bernhard Porsche 911 GT3 R and was demoted to fourth in the last few minutes of the session.

Pierre Kaffer posted the fifth-fastest time in the #15 Car Collection Motorsport Audi, while the #6 Black Falcon Mercedes was the final car to get within a second of Mies's benchmark.

The best of the BMW runners was ROWE Racing's #99 car in 12th place, which was over five seconds adrift of provisional pole with Alexander Sims at the wheel.

Qualifying continues on Friday with a second two-hour session under daylight, before a top-30 shootout is held later in the evening.