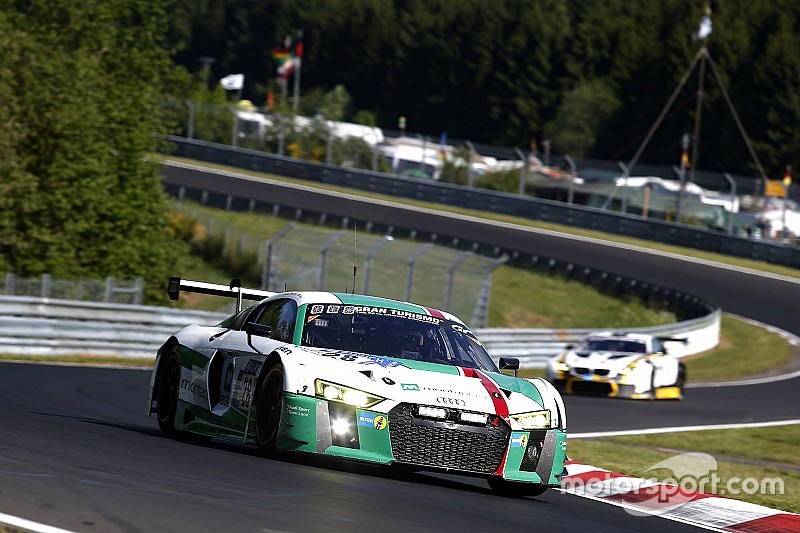 Kelvin van der Linde snatched an unlikely victory on the final lap of the Nurburgring 24 Hours after a sudden downpour played into the Land Motorsport Audi’s hands.

The long-time race leader was dealt a cruel hand just before the final hour when the #29 Audi slowed on track with an electrical fault.

He crawled back to the pits for a full system reset that allowed Rene Rast to steer the #9 WRT Audi into what seemed an easy run to victory.

The #29 Audi eventually returned to the track in third behind the #98 ROWE Racing BMW that had put itself in podium contention after a superb stint from Alexander Sims earlier.

But the race then turned on its head at the final pitstops. Slick stops for Rast and the #98 BMW returned them to the track on dry tyres, but a loose fuel cap delayed van der Linde and the team quickly decided to put him on wets.

It proved an inspired choice when the rain fell and the leading Audi and BMW was forced into the pits for wet tyres, allowing van der Linde to return to the lead and share the race win with teammates Markus Winkelhock, Christopher Mies and Connor De Phillippi.

The #98 BMW of Nicky Catsburg also passed Rast on the last tour, completing a weekend in which he took podiums in both the 24 Hours and the WTCC.

The ROWE BMW was followed across the line by the #42 Team Schnitzer BMW, which consolidated its position through Sunday morning.

The top 10 had looked spread out until the wet weather changed the dynamic of the race, but one constant was the battle for seventh between the Team Falken BMW driven by Peter Dumbreck and Tom Onslow-Cole’s Schubert car.

The Falken car had looked set for a podium finish overnight before a puncture after contact with the Walkenhorst BMW Z4 dropped it down the order and into the clutches of Onslow-Cole.

Onslow-Cole finally found a way past late in the final hour, but crashed on slicks in the wet, dropping to 12th.

The Falken BMW would prove unable to hold onto seventh, as the #22 WTM Racing Ferrari 458 GT3 sealed the position after running on the fringes of the top 10 throughout.

One of the biggest losers in the wet was the #8 HTP Motorsport Mercedes, falling from sixth down to ninth ahead of the #99 Rowe BMW late on.