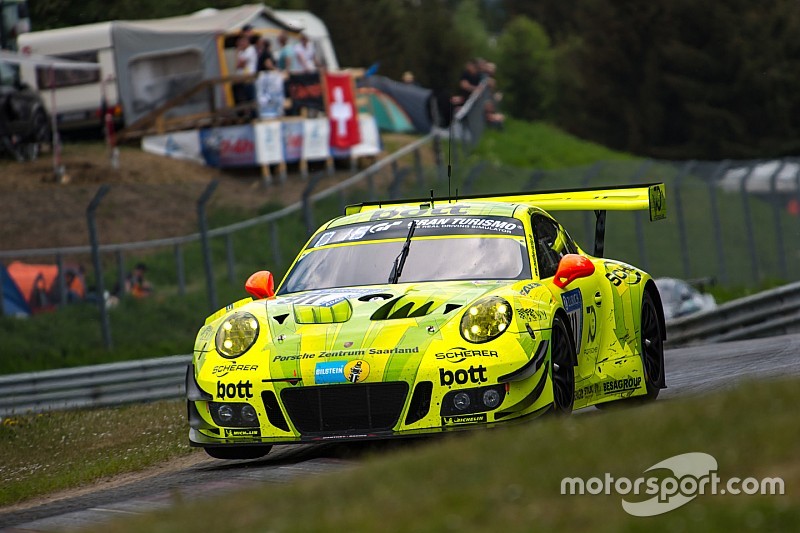 The Manthey Porsche team held a comfortable lead in the Nurburgring 24 Hours at the six-hour mark.

Kevin Estre drove the first stint in the polesitting #911 Manthey Porsche 911 GT3 R, establishing a large buffer over the opposition as several frontrunners went off-strategy in the opening part of the race.

Earl Bamber and Romain Dumas took over for the second and third stints respectively, having been surpassed by some of the cars that cut their first stints short, but Laurens Vanthoor emerged just ahead of Dominik Baumann in the #47 HTP Mercedes AMG-GT3 when he took over for the fourth stint.

The #911 Porsche was then jumped by the #4 Black Falcon Mercedes when Manuel Metzger handed over to Adam Christodolou just after the five-hour mark, but Estre - having replaced Vanthoor at the wheel - soon retook the lead at Kesselchen when Christodoulou was caught out in a slow zone.

Christodoulou pitted shortly after, two laps before a big crash at Tiergarten for the #8 WRT Audi R8 LMS of Dries Vanthoor as the Belgian picked up a puncture after clipping a backmarker and slammed into the armco barriers.

Vanthoor's incident slowed down the #4 Mercedes considerably and allowed Estre to hand back the Manthey car to Bamber and maintain the lead.

As of 2130 local time, Bamber held a lead of 26 seconds over Christodoulou, with Patrick Pilet running third in the #912 Manthey Porsche a further 39s back but due another stop shortly.

Edoardo Mortara ran fourth in the #47 Mercedes, followed by the #98 ROWE Racing BMW M6 GT3 of John Edwards which was due to serve a three-minute penalty for failing to respect yellow flags.

Audi's top runner was the #3 Phoenix car, currently with Frank Stippler at the wheel, which held eighth behind the #6 Black Falcon Mercedes and the #7 Aston Martin Vantage GT3.

The first lead contender to hit major trouble was the #48 HTP Mercedes when Renger van der Zande spun off and hit the wall on the Grand Prix loop trying to pass Marcel Fassler's Audi.

That incident consigned the #48 car to the garage for some time and it now circulates three laps down.

ROWE Racing's #99 car also stopped on track and had to be towed back to the pits after Connor de Phillippi suffered an incident with a slower car that damaged its cooling.

Another BMW, the #33 Falken Motorsports car, was also forced to make an extra stop due to an electronics issue that dropped it off the lead lap.