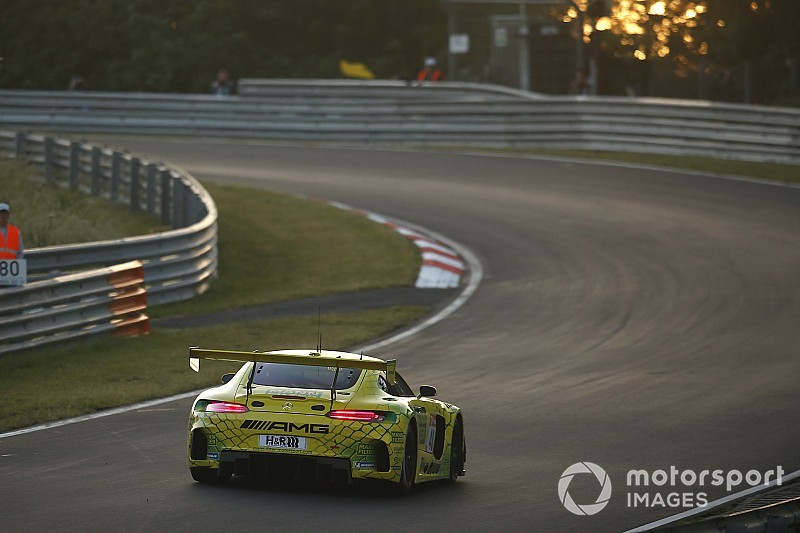 Mercedes driver Raffaele Marciello posted the fastest time in the first qualifying session for the 47th edition of the Nurburgring 24 Hours.

After a free practice session on Thursday afternoon cut short by barrier repairs and severe rainfall, most of the field got their first representative running of race week in first qualifying, and for most of the session the pace was set by Mercedes drivers.

With just over half an hour left, Marciello posted what turned out to be the fastest time of 8m24.801s in the #48 Team HTP Mercedes-AMG GT3 he shares with Christian Hohenadel, Lance David Arnold and Maximilian Gotz.

Other competitors didn’t have the chance to post faster times in the remainder of the session because of an incident between two slower cars and a lengthy slow zone.

Rene Rast was the fastest of the Audis in second place after a poor start to the session. The former DTM champion was in the end just 0.211s slower than Marciello at the wheel of the #14 Car Collection Motorsport R8 LMS.

Nico Bastian did the fastest time in the third-placed #6 Black Falcon Mercedes, 0.544s off the pace, with the best of the Manthey Racing Porsches, the #911, in fourth. ROWE Racing's #98 M6 GT3 headed the BMW assault in fifth.

The #2 Black Falcon Mercedes of Maro Engel was sixth-fastest, marginally faster than Nicky Catsburg in the #99 ROWE Racing BMW.

Jan Seyffarth was the fastest of the drivers in the #16 GetSpeed Mercedes and finished in eighth place, while the Ring Police Porsche 911 and the #101 Walkenhorst BMW completed the top 10.

Seventeen cars have already been granted an entry, while the rest of the GT3 cars will be judged with the use of theoretical lap times, taken from the best individual sector times during qualifying.