Memories return to those who remember the era of Peter Brock and Peugeot as the French marque returns to the Bathurst 12 hours.

THE BRANDS Brock, Peugeot and Bathurst don’t go hand in hand – but in fact they are intrinsically linked to the French Marque’s racing history at Mount Panorama. 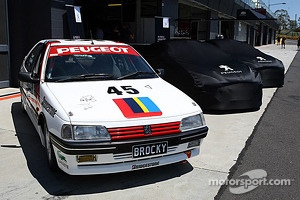 This year Peugeot return to the Mountain in an official capacity for the first time since that 1992 race, a two-car team of stunning RCZ Coupe entries to challenge this weekend’s Liqui-Moly Bathurst 12 Hour in a French-Australian combined attack.

The car remains in original condition, complete with Brock’s signature on the bonnet, and is one of the few remaining legacies from the 1991-1994 Bathurst 12 hour ‘era’. 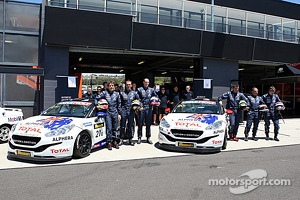 The Peugeot RCZ Cup is unveiled

The RCZ represents the latest in Peugeot technology, as the 405 did in 1992 – though the intervening 21 years showcase the massive difference between then and now.

1994 12-hour winner Neil Crompton remembers the 1992 event as a vastly different experience to today’s highly-professional factory operations. “It was a funny project – I think there were probably more drivers than crew, when we sat down as a group,” he said.

“It was the kind of car that you could drive flat out everywhere – it had enormous limitations with brakes and not a lot to adjust but you could just drive the thing flat everywhere. It would do the same lap times every lap, regardless of what you did.”

Crompton remembers a particular moment where his good mate Brock handed the car back – sans brakes.

“We knew when we got to Bathurst that we would have to nurse it, because it was basically a road car. In the first section of the race Brock got into a battle with a mate of his – Peter McLeod (who won the 1987 Bathurst 1000 with Brock and David Parsons) who was driving a Citroen. It was a battle of the French cars.

“Anyway, he melted the brakes off the thing. They were a total mess and I jumped in the car when he came in only to spend my time sitting in pit lane while they changed the entire brake system!”

“It was classic, old style production car racing. It’s amazing when you stop and think about it, it’s a long period of time ago – but when I close my eyes, it doesn’t seem that long ago.”

Crompton, now of course most noted as the voice of V8 Supercars on TV, has fond memories of what is now the Liqui-Moly Bathurst 12 Hour.

“It’s not that long ago I disconnected with it,” he said.

“I like endurance racing. It’s a different type of racing and you need to perform but try and nurse the car at the same time. “(Winning in) ’94 was great. It was a good field of cars and a very competitive field. Driving with Gregg Hansford and having mates like (Mark) Skaife and Garry Walden in the car was great.

“It’s good to see the event gaining some status again.”

The decade-long wait for a Dutch hero's F1 comeback