The 25 Hours of Thunderhill run last weekend in California confirmed the huge potential of the new Wolf GB08S.

Despite the air temperature being particularly low - close to zero degrees Celsius - Ivan Bellarosa set the pole position in 1'37.662, that turned out to be a performance unrivalled by all the other racers. The Italian driver and his co-equipers Miles Jackson, Al Unser Jr and Al Unser III have led the race for a long time. They have been fighting for the victory throughout the race with the colors of team JFC Racing, but a problem to the engine put the word end to their race during the twenty-first hour. The best laptime posted by Al Unser Jr (1'37.789) has been the fastest lap of the race though. 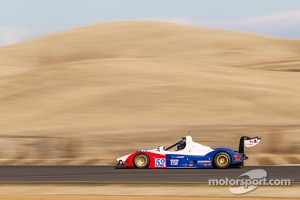 Ivan Bellarosa: "The car has been very quick in qualifying and the pole position gave a boost in confidence to the whole team. We unfortunately had an trivial electric problem during the formation lap that forced me to start the race from the last spot of the grid. The same inconvenience happened again later on, but the replacement of the alternator fixed it. We have been involved in a night incident and lost some precious time while fixing the car, but when we got back on track our pace still allowed us to fight for the victory. Unfortunately, the engine failed twenty-one hours into the race. This has been a positive weekend for the new Wolf GB08S despite the retirement: performance-wise, we did not have rivals in qualifying nor in the race and no design flaws emerged in the race".

Wolf cars will be on track again this coming weekend for the 12 Hours of Abu Dhabi, where the works team Avelon Formula will field three Wolf GB08. The lineup of the number 94 challenger will be composed by Guglielmo Belotti (ITA), Jesus Fuster (SPA) and Alessandro Tonoli (ITA). Ivan Bellarosa (ITA), Alessandro Latif (ITA) and Ryan Cullen (IRL) will be racing on the number 95 car, while Nicola De Val Stefano De Val (ITA), Maurizio Pitorri (ITA) and Gianluca Pizzuti will take shifts at the wheel of the number 96 car. Team BF Corse will also be present with a fourth Wolf GB08 driven by Filippo Caliceti (ITA), Simone Borelli (ITA) and Gianmarco Gamberini (ITA).