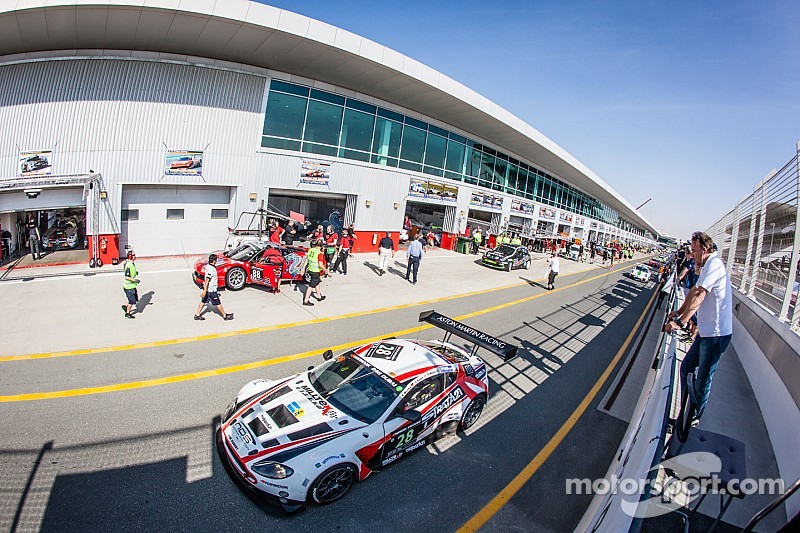 Porsche signalled their intent early on in the build-up to the 2015 Hankook 24 Hours of Dubai, by topping the timing the timing sheets at the end of the first free practice session of the event on Wednesday at Dubai Autodrome.

The Fachs Auto Tech Porsche 997 of Otto Klohs, Martin Ragginger, Jens Richter and Sven Muller setting the early pace, with a best lap time of 1:59.170 and with it suggesting that Porsche intend repeating the win scored last year by Stadler Motorsport Porsche.

Trailing the pace setters by a mere 0.118 was the KPM Racing Aston Martin in the hands of Paul White, Stefan Mucke and Jonny Adam.

For teams the Wednesday free practice was optional and only 66 of the 95 entered teams took to the track. The session was used mainly to shakedown the cars and for drivers to get track time ahead of a busy schedule on Thursday with practice from 11:30 to 14:45.

The race set to be flagged off by ATCUAE president Mohammed Ben Sulayem at 14:00 on Friday with the chequered flag waving to bring proceedings to an end at 14:00 on Saturday, followed by the podium ceremony.

Throughout the weekend Dubai Autodrome paddock will be a hive of activity with a myriad of off-track entertainment and attractions for the whole family, with free entry to the circuit - including access to grandstands and paddock area.

Daytona escalator race? And no, we aren't making this up