With nighttime temperatures in the high 20s the field is beginning to see the sunrise.

With nighttime temperatures in the high 20s the field is beginning to see the sunrise. The early night leader, No. 03 ES Class Team Quick Racing Superlite, surrendered the lead at around 5:00 a.m. to the No. 24 Audi TT RS. The Superlite had a steering issue that could not be repaired. The Audi TT RS is being driven by Robb Holland, Kevin Gleason, Jeff Altenburg, Roland Pritzker and Robb Huff.

"It was a struggle on Friday," Holland said. "We had an ECU problem and the car did not run all day and we missed qualifying. It affected our seat time, so we came into the race with a real conservative strategy. We just wanted to go out and run fast laps. We knew we would be consistent and that some of the other teams would have problems.

The Audi TT RS is running great. The drivers are all doing a great job. We have been doing a text book endurance race. We are in the lead with six hours to go, the race is in our hands and everyone is chasing us. We really haven't had any problems, some small car contact, but no real damage. We have had a trouble free race." 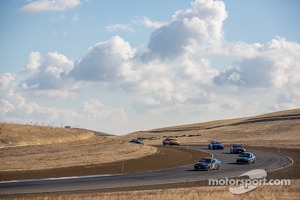 The No. 52 JFC Racing Wolf is leading the ESR Class, third overall. Al Unser Jr. is sharing the car with his son Al Unser III, Miles Jackson and Ivan Bellarosa.

"We had some contact at about four o'clock this morning in Turn Two," Jackson said. "That bent the rear control arm and damaged the brake rotor. The crew did a great job with repairs and we are back out. We have a little alignment issue, the rear is toed-in a little. We are going pretty good so far. We have seven hours to go and we can make up some time this morning. Wolf has put together a fantastic car. We have about three more driver stints to the end."


Tom Brown in the E0 Class leading No. 18 Luxury Racing Mustang had a good night stint and likes the way the Mustang, with support from Winding Road, is running.

"It has really been exciting for a team that came together just this last year," Brown said. "Tom Martin put together a great group of people. The Mustang is awesome and is really fun to drive. I usually drive a Spec Miata, this car handles really similar. For the most part we have had a trouble free run. The usual tires going off and we just had our maintenance brake change. We are just trying to keep our small crew as fresh as possible. The race has been relatively smooth." 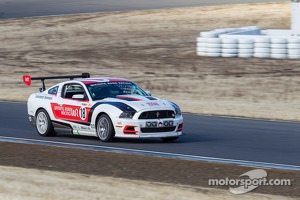 In E1 the No. 27 Team Honda Research West Acura is still leading the category. Lee Niffenegger had the last night stint.

"The Acura is running really strong," Niffenegger said. "The car is really handling. It was getting a little crazy out there with traffic, the faster guys getting impatient with the slower guys, but we have a good car. We are having a slight issue under cautions. We are having to bleed the cooling the system in 20-degree weather, which is kind of crazy."


The E2 Class is headed by the No. 78 Sector Purple Racing Mazda Miata. Team owner and driver Kyle Watkins likes his chances as the sun rises.

"The race has gone pretty good," Watkins said. "We are doing a little slower pace, focusing on better fuel mileage. We are getting two more laps on fuel than our competition. The little Miata is ticking like a Swiss watch. Mechanically the car is very sound. The Toyo Tires have really held up for us. We are four laps ahead and our strategy is working out."


In the E3 Class the No. 05 949 Racing Mazda Miata is still leading the very competitive Miata packed division. Andrew Kidd, crew chief, has the team running a flawless race.

"The 949 Miata has been running like a top," Kidd said. "We have been doing little system checks and following our maintenance protocols and really just running our race. We have had no real dramas to speak of so far. The drivers are doing a great job hitting their marks. They are not pushing the car too hard. We had a couple little issues, but nothing that really cost us any significant time. I want to thank 949 Racing, TrackHQ.com and Track Speed Engineering."

Nic Hamilton: “My goal is to separate myself from Lewis”

New challenge for Melo after his arrest in Brazil