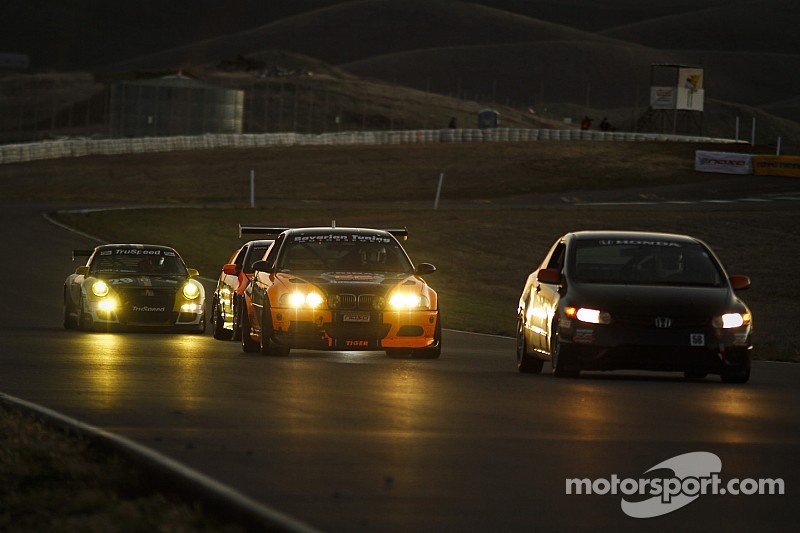 The Davidson Racing Norma is still on track and running well, according to overall leading Randy Pobst.

WILLOWS, Calif. (Dec. 7, 2014) - The 25 Hours of Thunderhill presented by Hawk Performance and sanctioned by the National Auto Sport Association (NASA) has been running for 19 hours at Thunderhill Raceway in Willows, Calif.

The story of the event has been 31 cautions, so far, and one red flag stoppage. In addition the mild weather, 50 degrees through the night has also helped the 54 teams. The class leaders at the 12 hour mark all still continue to lead their classes at 19 hours.

"The Davidson Racing Norma is running great, handling great, the transmission is a little funny," Randy Pobst, driver, said. "We have been having transmission problems for hours. It is slowly deteriorating. If you pro rate the deterioration over the last 13 hours with five to go, we may make it. We have one driver not feeling too good, so I am getting ready to go back in the car. No one wants to win this race more than Bob Davidson and we want to get it for him. The yellows have helped. It gives us drivers a little break. The car goes two-hours-and-fifteen-minutes on a tank of fuel. The car pulls a lot of g-forces. The yellows also are helping our transmission issue."

The No. 00 Award Motorsport/Ehret Family Winery Porsche leads the ES Class continues to run in second place overall. A Porsche has won this race six of the 11 years. "Everything is going really good," Tommy Sadler, driver, said. "This Porsche is one of the best cars I have ever driven here. The weather is very nice, that makes it easy on the crew and the car. We are going to push hard and not take any chances. We have to let that Norma come to us. We have to maintain our pace and strategy and hope they have some problems."

In the E0 Class the No. 33 CA Sport/Skullcandy/Team Nissan 370Z continues its amazing run a new car. "Our race has been like clockwork," Brian Heitkotter, driver, said. "We had a couple of penalties early in the race, but we got those behind us and we are running great. We worked our way back to the front overnight. The 370Z is very easy to drive. We have been running consistent laps making sure to conserve the car. Traffic during my stints have been pretty good. This car was a street car two weeks ago. It didn't a turn lap before yesterday."

The No. 67 BMW of Sparta Evo Brakes/Maxxis Tire/Bullet Performance leads in E1. "We are just doing laps right now," Brett Strom, driver, said. "We have been trading fast laps for the last few hours. Our competition is getting lucky pitting right before the yellows. Neither of us have broken, so we are just waiting. We have had no problems at all. We are getting good gas mileage and we are faster in the pits, so our two teams are dead nuts."

Team RDR and their Mazda RX-8 continue their strong run in the E2 Class. "The RX-8 is great, the balance is still very good," Lee Papageorge, driver, said. "We had a little handling issue at the beginning of the race, but we were able to dial that out at the first pit stop. When the tires go away, naturally you have to pay a little more attention. We have been able to maintain our gap. We have a set lap time we want to run and we are all staying in that window for the rest of the race."

The No. 23 RJ Racing Miata still leads in the E3 Class. "We are still leading," John Gibson, team owner and driver, said. "We have the New York Rock Exchange team two laps behind us and they are running some fast laps. We are trying to stay consistent and clean and see how we can make strategy work in our favor. We need to add some more speed and be consistent the rest of the way. This time last year we were down 12 laps and won the race. So never say die."