Blancpain Endurance Series evening qualifying brings the SMP Racing Ferrari 458 to the top of the charts.

Qualifying began with near perfect conditions at the sun-drenched Spa-Francorchamps, but the ambient and track temperatures dropped suddenly, halting the teams’ ability to chase a quicker time to enter tomorrow's exciting Superpole competition. SMP Racing's quickest lap was produced on the second lap of the first session, but two cars, the #1 Belgian Audi Club Team WRT Audi R8 LMS ultra of Laurens Vanthoor (BEL) and the #911 ProSpeed Competition Porsche of Nick Tandy (GBR) were able to produce a top 20, Superpole worthy lap in the later Night Qualifying session. 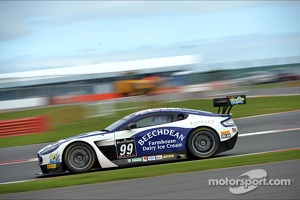 Just like Pier Guidi, Beechdean AMR's Stefan Mücke (DEU) went on track early and benefitted from the decision. The Aston Martin factory driver set a 2:20.437 on his fourth lap, just 0.050s behind the Ferrari driver to ensure Pro-Am Cup topped the time sheets ahead of Superpole tomorrow for the prestigious 24-hour event.

A surprising debutant in tomorrow's Superpole will be Porsche factory driver, Marc Lieb. The German racer's lap of 2:20.782 was more than enough to ensure qualification.

HTP Motorsport posted the fifth quickest time, making them the fastest Mercedes in qualifying. At the helm was Maximilian Götz (DEU) who narrowly beat the #18 Black Falcon SLS of Thomas Jäger (DEU). 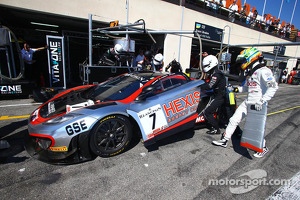 Splitting the two AF Corse Ferraris was the #7 Pro entry of Alvaro Parente's Hexis Racing McLaren MP4-12c with a 2:21.283. Tenth to thirteenth was separated by just over a tenth of a second. Quickest of the group was the #26 Vita4One Racing Team Ferrari of Frank Kechele (DEU), followed by the Team Ukraine Ferrari, and the #3 Marc VDS Racing BMW of Yelmer Buurman. Peter Kox in the #24 Blancpain Racing Lamborghini LP560-4 was thirteenth, having regularly troubled the top-ten positions.

Alex Buncombe ensured at least one of the Nissan GT Academy Team RJN Nissan GT-R NISMO GT3's made it into Superpole, his 2:21.624 ensured he finished 0.29s ahead of Russian star Mikhail Aleshin's #73 SMP Racing Ferrari 458 Italia.

Local hero, Laurens Vanthoor made sure Belgian Audi Club Team WRT had a place in the Superpole, the young Belgian driver narrowly going quicker than the Belgian ProSpeed Competition team. British Porsche star, Nick Tandy's 2:22.118 made certain of a strong presence for the German marque in Superpole.

Tomorrow’s 20-minute Superpole session begins at 18:15 CET and will determine the final order of the top twenty qualifiers for Saturday’s endurance epic, the Total 24 Hours of Spa.

Marc Lieb, Porsche 997 GT3 R #150, Manthey Racing: “Qualifying was ok. We basically worked the whole day on race set up and we had only one shot with new tyres. It was the right time to get out, it was the quickest time of the circuit at the beginning of the first session. It’s going to be my first ever superpole! We can be first or 20th, it’s a big gamble on one lap. We are happy with our performance, we did not expect to be that quick. We are confident but I would not say that we are favourites as the Porsche is not the quickest car on track. It’s nice for me to have a chance to fight for the win again as I won here 10 years ago with Romain Dumas and Stéphane Ortelli and I’m looking forward to the race.”

Alessandro Pier Guidi, Ferrari 458 Italia #70, SMP Racing: “It’s nice to be first in the overall classification tonight, but tomorrow it’s the Superpole so we could be 20th on the grid on Saturday… But I’ll try to be on pole. We showed that we have the pace. We are in a PRO-AM Cup so we also need to find a good compromise on the car set-up for all the drivers. Today I did my best time in my second lap, so it was like a Superpole… For SMP Racing it’s very important to be on top tonight.”

Stéphane Lemeret, Ferrari 458 Italia #52, Sport Garage: “I’m happy to be first of the Gentlemen Trophy but a little bit disappointed not to be in Superpole. We were supposed to use the last set of tyres at the end of the night session, but due to the red flag we did not have time to put it on. It’s positive to set the pole in the category. It is my first time in the Ferrari 458 and I was immediately confident with it. It’s the first time that I’m in charge of qualifying, so it was interesting and nice. And I’m in front of Frédéric Bouvy, the most experienced driver here with his 19th participation (17th for me).”

Koen Wauters, McLaren MP4-12C, Boutsen Ginion. Team Belgium Captain: “As the Captain of Team Belgium, it was nice to see Laurens Vanthoor set the fastest time of the night session and make it to Superpole. He is one of the most promising drivers we have in Belgium, so it’s good to see him fighting for the pole position on Friday. Our drivers delivered well as usual. It’s nice for the team, for the drivers, for the partners and for the show to start in front of everybody on Saturday.”

Marc A. Hayek, #24 Blancpain Racing Lamborghini LFP560-4 – Pro-Am Cup "So far, everything is going well, we still need to find some set ups but we are very happy to be in the Super Pole. I trust Peter to improve our time tomorrow, because he will be the one doing the Super Pole. There is room for hope, but this is a long race, so we will see what happens!"

Spectacular parade launches the entries for 24 hour race in Belgium

AF Corse "proved it was the best" in GTE Am, says Perrodo