The new up and coming team has impressed in their debut, even taking a class victory in their first time in the European Le Mans Series.

For their debut on the international GT scene, SMP Racing is doing things right. Once again, the team had four Ferrari 458 Italias entered in the Blancpain Endurance Series race at Silverstone (two in Pro-Cup and two in Pro-Am Cup) this past weekend. Meanwhile, the team was also present at Spa-Francorchamp with the World Series by Renault circus as well as the Nürburgring for the International GT Open with support from Russian Bears Motorsport. 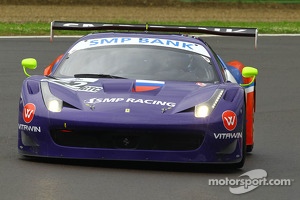 Two weeks before, the team made its first appearance in the European Le Mans Series and took the GTC class victory. This first experience in ELMS could incite more participations before taking on even more ambitious projects, including a presence in LMP2 in the short term to run alongside the GT program. The team has called on more technical and logistical expertise, notably in the form of Paolo Catone, which isn’t by coincidence considering the team’s future ambitions. In the meantime, SMP Racing has given itself all of the tools for success.

Recently, the team’s three top bosses, Sergey Zlobin, Boris Rotenberg and Yuri Evstigneev, sat down with us to review the season so far and to look ahead for what’s to come.

Laurent Mercier : Two weeks before Silverstone, SMP Racing was at Imola where you took the class win. This presence in ELMS, will it continue?

Sergey Zlobin : “We took the work to prepare for the race seriously and it paid off. The race at Monza for the Blancpain Endurance Series was really the first true outing for the team. Everyone had to learn to work together. Our team is still new and we were discovering a new series where prototypes and GT cars share the track. Taking part in endurance races is more valuable than testing. After Monza, the team continued to work and we’re progressing. n'était que la première vraie sortie du team. Il a fallu que tout le monde apprenne à travailler ensemble.”

At Monza we spoke about a possible entry into LMP2. Has anything advanced since last month?

Boris Rotenberg : “The race at Imola reinforced our desire to move to the next level. The idea is to have to LMP2 cars in the European Le Mans Series and also take part in the Le Mans 24 Hours in 2014. We are interested in the ELMS and will be making our decision shortly.”

Have you chosen which chassis?

Sergey Zlobin : “We are in talks currently. We don’t yet know what shape it will take. Will we start off with testing only, or will we quickly move to competition…nothing has been decided yet. For the next ELMS race at the Red Bull Ring, we will be there with at least one or two Ferraris. We had a constructive discussion with Gérard Neveu at Imola and the organisers are happy to have a new team in the mix.” 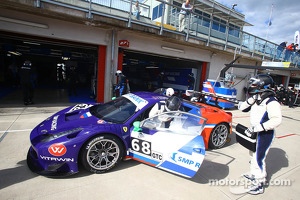 We’ve heard here and there that a Ferrari engine could power the prototype. Is this true?

Boris Rotenberg : “We all know that Ferrari is currently focused on GT. We want to do things right and take it step by step. For the LMP2 project, I think we’ll know more around the 24 Hours of Le Mans or at Paul Ricard for the next Blancpain Endurance Series meeting. Additionally, I’ll be driving in the Ferrari Challenge support race ahead of the 24 Hours of Le Mans this year alongside Boris.”

And the arrival of Paolo Catone to the team? This predicts a prototype future for SMP Racing, doesn’t it? Sergey Zlobin : "It’s not a coincidence that Paolo is joining us. We know what he’s done in the past and he was the man behind the Peugeot 908. He is helping to build our team. We are only at the start of the project and our ambition is also to take race drivers from karting to the highest level of auto sport. It’s still too early to announce anything, but serious thinking is underway.”

Toyota celebrate as Davidson and Buemi are crowned World Champions

A new ELMS title for the ORECA LM P2 chassis !