Strong start for Marc VDS in the Eifel 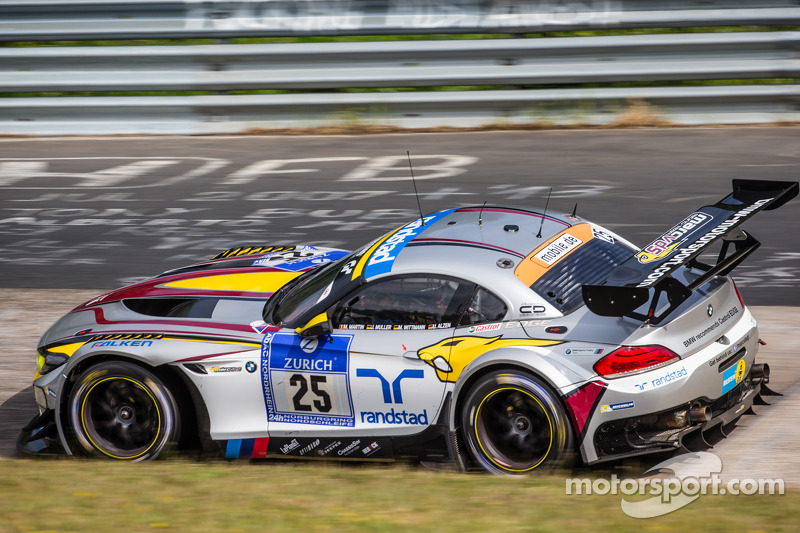 The first four hours of the race were run in dry conditions.

Nürburgring, Germany – 21 June 2014: BMW Sports Trophy Team Marc VDS made a strong start to the 24 Hours of Nürburgring, with #25 of Markus Palttala, Dirk Adorf, Bas Leinders and Nick Catsburg in fifth place. After an unavoidable spin on oil, #25 – Maxime Martin, Marco Wittmann, Jörg Müller and Uwe Alzen lay 12th but on the lead lap. At the turn of the hour, 25 laps had been completed.

The first four hours of the race were run in dry conditions. However, there were still a number of incidents around the circuit. For Marc VDS, there were two incidents of note.

Having comfortably held second place from the start, Martin approached the esses on the GP-Strecke only to find a patch of oil. The resulting spin was unavoidable but the Belgian was able to continue, via a quick check up and change of tyres in the pits. Crucially, he did not lose a lap to the major competitors. Thanks to some determined driving from first Martin, then Wittmann and Müller, the car was able to make significant progress.

For #26, it was a period of improvement from the starting position of 12th. Despite early contact with the #20 BMW Sports Trophy Team Schubert car, Markus Palttala had a good run and both Leinders and Adorf made places to leave the car in fifth. With pitstop cycles, the car had run as high as second.


Maxime Martin, BMW Z4 GT3 #25, 12th: “I was running second, with a gap of around five seconds to the leader. Then at the chicane there was oil on the track, and there was nothing I could do and there was a small accident. It seems there was no significant damage and we can continue. Sure, we lost a little time but we will push and try to get back to the front. I think the car is really quick, and there’s plenty of time.”

Markus Palttala, BMW Z4 GT3 #26, 5th: “My plan was to go easy at the start, find my place in this snake of cars, and then keep it calm, then push tomorrow. The problem with this plan is that there are so many quick cars close to each other that if you lift to avoid a side-by-side, you’ll be passed by two other cars! The contact was a misunderstanding between me and Claudia Hürtgen. I went round the outside of turn one to be on the inside for two, and in my opinion we should have gone side-by-side through it. Unfortunately she closed the door and I couldn’t brake enough to avoid the touch. I want to apologise to the team and of course to BMW Motorsport for that. There were so many close calls, I’m just happy to be running.”

Marc VDS fly to front row at 24 Hours of Nürburgring

Rotek Racing on a recovery drive as darkness descends over Nürburgring