Superb podium for Walkinshaw on endurance debut in Abu Dhabi 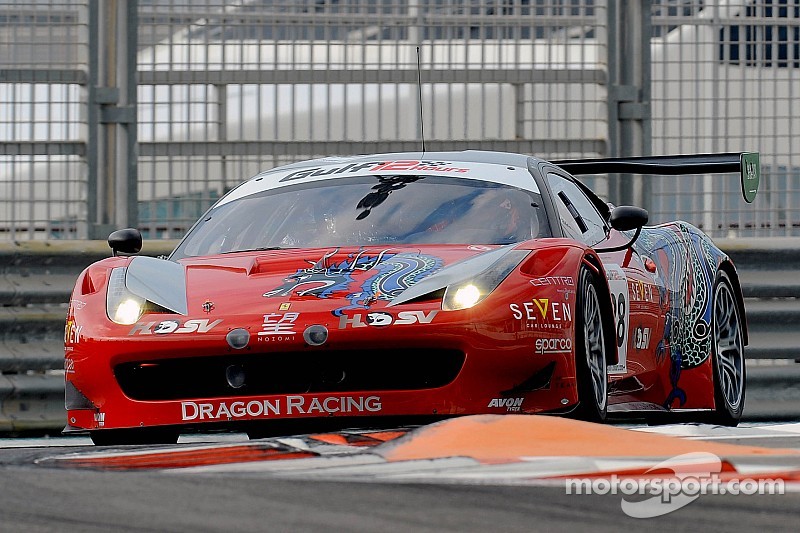 Sean Walkinshaw finished third in class during the annual Gulf 12 Hours at the Yas Marina Circuit.

Sean Walkinshaw declared himself justifiably delighted with his endurance racing debut in the United Arab Emirates on Saturday, 13th December, after finishing third in class during the annual Gulf 12 Hours at the Yas Marina Circuit in Abu Dhabi.

Despite a major dose of flu, the 21-year-old made a lasting impression at the wheel of the No.88 Ferrari 458 Italia, which he shared with Dragon Racing team-mates Jordan Grogor and Mohammed Jawa, to take a sensational Pro-Am class podium on his maiden weekend in sportscar racing.

“It’s been amazing”, said the elated Chipping Norton driver, “Everyone at Dragon Racing did a great job and Mohammed and Jordan did really well. It’s so nice to get on the podium in my first ever endurance race, hopefully the performance we delivered this weekend will help to open up a few more options for us for next year.”

The main challenge for me was getting used to the high fuel loads in the car, it’s something new to me coming from single-seaters in F3 but it all went OK.

Notably, the weekend marked the welcome return of the ‎famous Walkinshaw name to endurance based sportscar competition with Sean'‎s switch from single-seater racing to GT action seeing him follow the same path trodden by his late father, Tom Walkinshaw, back in the 1970s.

Arriving at Yas Marina Circuit on Thursday, 11th December, for the initial practice sessions, Sean quickly got to grips with the Ferrari and the circuit and the team ultimately qualified 12th fastest overall and seventh in class for the first of the two six hour contests – the Gulf 12 Hours split into two races, one in the daylight and one at night.

Running strongly to eighth position overall in his first stint, the Briton’s team-mates also delivered strong showings. When Sean retuned to the driving seat for the final stint of the opening six hours, he climbed from ninth overall into seventh at the chequered flag, fourth in the Pro-Am scrap.

The second six hour race, which took place under the Yas Marina floodlights following a three hour interval, went similarly well for the Dragon Racing trio and they managed to complete the combined 12 hours in the Pro-Am top four before profiting from a penalty for a rival team.

Marking Sean’s first ever race in the dark, he completed two very strong stints and with just over half an hour remaining the team held third in class with Grogor at the wheel. Then, though, the Safety Car appeared following an accident for MotoGP star Jorge Lorenzo.

At the re-start, the No.88 Ferrari lost a couple of places but Grogor managed to climb back into fourth in class before the chequered flag. Post-race, the No.10 Mercedes SLS AMG was served with a time penalty which elevated the Dragon Racing trio into third in Pro-Am and sixth overall.

“With half an hour to go we were quite comfortably going to get the podium, then we had the first Safety Car of the entire race”, explained Sean, “That looked to have ruined it, we got overtaken at the re-start but then Jordan [Grogor] managed to get back up to fourth in Pro-Am and then the time penalty for the Mercedes guys got us back on the podium.

“The first six hours went pretty well, I was P8 in my first stint, we went to P9, and then I got P7 and fourth in class in the last stint. The main challenge for me was getting used to the high fuel loads in the car, it’s something new to me coming from single-seaters in F3 but it all went OK. Overall, it’s been a fantastic weekend and I really enjoyed it.”

Sean’s focus now turns to plans for the 2015 motor racing season where he is bidding to secure a place on either the Blancpain Endurance Series grid or in the sister Blancpain Sprint Series.

24 hours in: The Maxi Endurance 32 Hours at Algarve