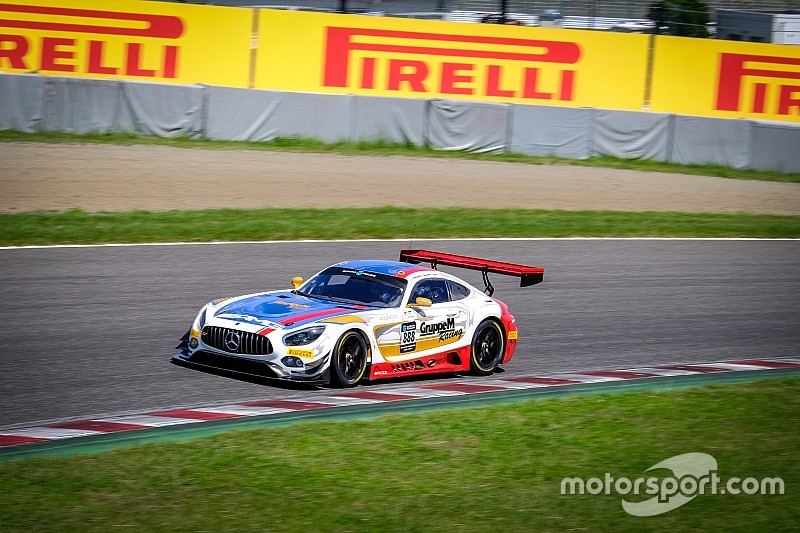 GruppeM Mercedes holds a net lead at the halfway point of the Suzuka 10 Hours, the Asian round of the Intercontinental GT Challenge.

The #888 AMG GT3 of Raffaele Marciello, Maro Engel and Tristan Vautier started second on the grid, but was promoted to the lead when the pole-sitting Ferrari was handed a drive-through penalty.

The #28 HubAuto Corsa car was penalised for a start procedure infringement after mechanics were found working on the car after the formation lap had begun.

Although the Ferrari was released before the final car had gotten off the grid, the breach of rules meant it dropped outside the top 10 after serving its penalty.

HubAuto’s early woes gave the GruppeM Mercedes a clear track and its advantage stood at just over 10 seconds at the end of the fifth hour, despite a safety car being called in during the third hour for a collision between the #07 M-Sport Bentley and the #58 Garage 59 McLaren.

Factory McLaren driver Come Ledogar was attempting a move when it was pitched into a spin at 130R, the 650S GT3 getting beached in the gravel and forced into retirement.

The #43 Strakka Mercedes was one of the teams that jumped up the order due to the safety car, with its trio of Lewis Williamson, Maxi Gotz and Alvaro Parente moving up to a net second.

The #07 Bentley of Jordan Pepper, Steven Kane and Jules Gounon led the race on the road at the five-hour mark, but will slot back into third after it makes its next stop.

Davide Rigon, Matt Griffin, and Miguel Molina sit a net fourth in the #27 HubAuto Ferrari, ahead of the #75 Sun Energy 1 Mercedes of Kenny Habul, Mikael Grenier and Luca Stolz, which ran as high as second early in the race and is among the cars yet to pit.

The #66 WRT and #6 Absolute Audis effectively run sixth and seventh, while Super GT squad GoodSmile Racing with Team Ukyo charged its way from 21st on end up eighth with its #00 Mercedes.

M-Sport’s other #08 Continental was effectively ninth, making it two Bentleys inside the top 10.

The #23 KCMG Nissan was running in fifth when Edoardo Liberati, who shares the car with Audi LMP1 star Oliver Jarvis and Richard Bradley, was forced to pull over with an unknown issue.