All drivers have been preparing intensively for the desert marathon the last weeks and will now look forward to the first training sessions and the qualifying.

The shipping containers are empty, the pit boxes are prepared – the Mercedes-Benz SLS AMG GT3 of Team Abu Dhabi by Black Falcon and the sister-SLS and two Porsche racing cars of Team Black Falcon are ready for the first big race of the year, the 24 Hours of Dubai.

To create the hat-trick the third time in a row in Dubai is the stated as the goal of Khaled Al Qubaisi (UAE). To leave it as little as possible to chance the fast GT driver from Abu Dhabi has called on both Mercedes-Benz SLS AMG GT3's of Team Abu Dhabi by Black Falcon this year. 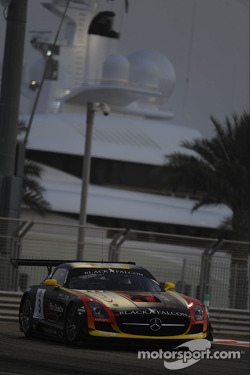 With Bernd (GER) – one of the most successful touring and GT car drivers and the Dutch GT-ace Jeroen Bleekemolen (NED) the winners of last year are at Al Qubaisi side. Together with Andreas Simonsen (SWE), a strong and young GT-talent, the quartet is completed.

With Abdulaziz Turki Al Faisal (SAR) one of the strongest competitors of the previous races, on one car with Al Qubaisi for the first time. The fast Saudi Prince brings a lot of GT-experience and Team Black Falcon is proud that he will drive the SLS AMG GT3 on the Dubai Autodrome.

The racing experience of Hubert Haupt (GER) goes back to the beginning of the DTM, where he drove an Audi V8 factory car. Today he mainly participates in long distance races. On the Mercedes-Benz SLS AMG GT3 he already competed in many races. The same applies to Adam Christodoulou (GB) who is a sought after GT-driver since many years and who has had his early career in Formula racing. Fifth man on the SLS with the start number two is double starter Jeroen Bleekemolen.

On the number 1 SLS the Sean Edwards Foundation will be very present. Two successes Team Abu Dhabi by Black Falcon celebrated together with Edwards at the 24h of Dubai. These great moments of the driver and friend, who was gone too soon, will be remembered every round at the Dubai Autodrome.

All drivers have been preparing intensively for the desert marathon the last weeks and will now look forward to the first training sessions and the qualifying. The technical crew is happy to be back at the place of great successes of Team Abu Dhabi by Black Falcon.

In addition to the SLS overall victory contenders, Team Black Falcon brings two Porsches to the United Arab Emirate. With Burkard Kaiser (GER) and Willi Friedrichs (GER) two regular drivers will sit behind the steering wheel of the Porsche with the starting number 44. They will be supported by Arturo Devigus (SUI), Anders Bach Fjord (DEN) and Vladimir Lunkin (RUS). The common goal is it to drive all the way forward in the GT phalanx with the long distance proven cup racer.

The second Porsche with the starting number 156, the new model 991, will experience its first race with Black Falcon. The GT-racer is now the first choice for all serious amateur pilots and the ideal springboard towards the cup class. In Dubai the regular drivers Christian von Rieff (GER), Helmut Weber (GER), Gerwin (NED) and Philip (NED) will use each round in order to gain experience in their new race car. Not least, the high basic speed and the great reliability of Porsche arouses the expectation of the quartet to secure a place far forward in the overall standings.

A parameter, which rarely intervenes in racing in Dubai, has become unpredictable for the whole team: the weather. The sky over the normally sunny Emirate looks very unstable. But that can not disturb anyone in the team, because Black Falcon already competed successfully in countless weather battles at the Nürburgring.

Also the fans at home can follow the event intensively. In addition to the Twitter channel and the Facebook page of Team Black Falcon especially the official website offers a live stream and live timing which is a good opportunity to be part of the action. The corresponding links can be found at the end of this release.

Sean Breslin, Team Manager Mercedes-Benz SLS AMG GT3: "We have had a very good preparation for this year. Parts of our equipment were brought directly to Dubai from the 12h race in Abu Dhabi in December, the neighbor Emirate of Dubai. Therefore, it was enough time to bring the cars back on track. The mood of the whole team is extremely good, after the holidays in Europe the crew had enough rest and is excited to give everything for the hat-trick.“

Alex Böhm, Geschäftsführer Black Falcon: "From the team foundation on the 24h race of Dubai was a very important point in the racing calendar. We are proud to be able to go to the start with these good drivers. With the SLS AMG GT3 we are with the front runners in the overall standings and really want to get the hat-trick. But our Porsches can also get strong results, it will be an exciting race.“