The story of a photo, or how to burst your bubble about the romantic idea of an impromptu photo shot on the spur of the moment.

This is the story of a photo that was planned, well in advance. Or should I say, “crafted” in its greater details. Just a warning: if your idea of photography involves a process that is mostly improvised and based on “capturing the moment”, please move on. You might be quite disappointed by this article.

The garden of plants

But first, the scene: Pflanzgarten during the 24 Hours of the Nürburgring. The whole Pflanzgarten 1 section is quintessential Nürburgring Nordschleife: maybe more than any other section of the legendary track, no one in his right mind would design such a configuration, nowadays. Looking at it from different angles, it looks more like a downhill ski slope with a jump in the middle. But rather than snow, one is welcomed by the oh-so typical Nordschleife asphalt decorated with graffiti.

It is an insane, an absurd, a you-name-it area. But it is also breathtakingly beautiful, in a natural kind of way. It goes down left, breaks right, breaks left, drops into a dip (the “Kleiner Sprunghügel” for close friends) before going into an uphill right turn - all this in a mere 5 seconds (for GT3 cars). It is challenging for racers and an immense source of visual pleasure for photographers. 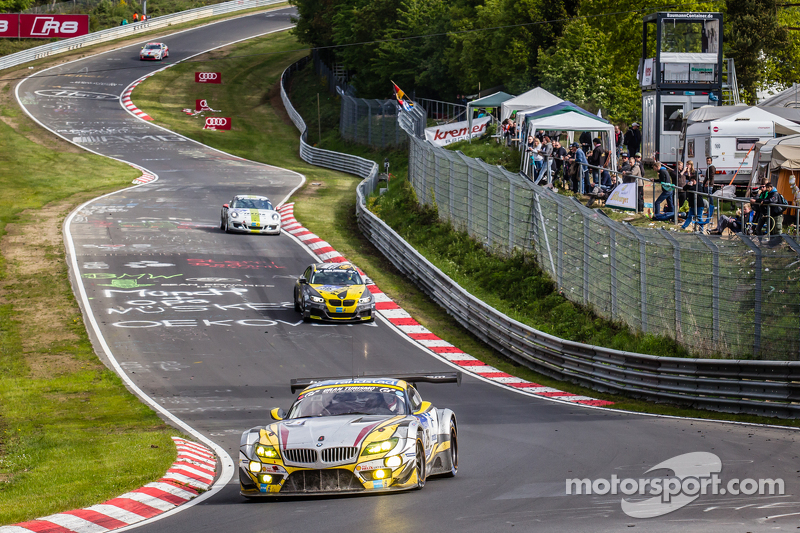 Among other things, Pflanzgarten is perfect to shoot cars doing four-wheel lifts at the jump, and to get that Nordschleife ambiance.

Oh, and Pflanzgarten also gets a bonus point for for the fan ambiance: not as brutal as in nearby Brünnchen, but more than enough to keep a photo busy. The interesting part is the total contrast between the “activity” in the fan zone across the track (on the left) and the sense of loneliness one can feel where I shot this photo (on the right side of the track). Other than three course marshals, we were pretty much on our own there. Not many trackside media photographers make it to this exact location because put simply: it’s a bitch to get there. This is inside the track, where the forest is very dense and access points are almost none existent (more on this later). 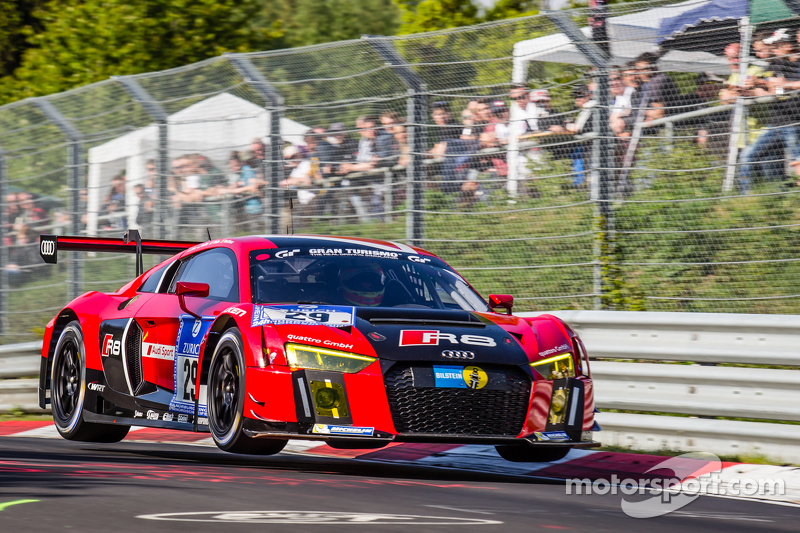 Why I planned so much for this shot? Simple: because this is the only photo I had in I mind when I left for the 24 Hours of the Nürburgring weekend. I did a similar time exposure photo a few years ago at the same spot, in pitch darkness. The shot was awesome, but back then, I remember thinking that it would be so neat to try it at dusk, during the blue hour when one can still see the trees rather than pure darkness.

I never tried it in the following years for many different reasons and I thought that this year was the right time, especially considering the fact that I shoot less and less races and who knows what next year might bring.

And so, this is how I planned my Saturday evening, with the end goal of shooting that time exposure shot at Pflanzgarten (of course): I knew that the optimal time would be 21h45 and since I still had to shoot some evening track action to feed Motorsport.com’s stories and galleries, I figured that the optimal way to do it would be to start my evening at Schwalbenschwanz. This area is perfect for evening photography and many different angles are possible.

Even better: there is a little dirt road inside the track that goes all the way from Schwalbenschwanz to the top of Pflanzgarten (and beyond, to the Brünnchen tunnel). This road (a bike trail, actually) seems permanently covered with mud and might be the nastiest I’ve ever driven on. There is also a drop on one side that seems like an endless pit. In pitch darkness, one really has to know where to go and even a GPS will choke – the Google Maps app can see this trail and does a good job in figuring where to stop and park. In short: you’re in the sticks.

Planning backward, I knew that I needed to shoot at Pflanzgarten at 21h45 (maybe until to 22h00). I needed about 10 minutes to setup and experiment a little bit with exposures. With that in mind, I had to park the car in the forest at Pflanzgarten at around 21h30 (and plan for that 5-minute trek from parking to the trackside shooting spot). The aforementioned dirt road is fairly slow and it would take about 8-9 minutes to drive the 1.9 kilometer between the pedestrian tunnel at Schwalbenschwanz (where I parked the car) to the parking “spot” at Pflanzgarten. So I left Schwalbenschwanz at 21h10 and arrived at the shooting position at 21h35. The plan worked. 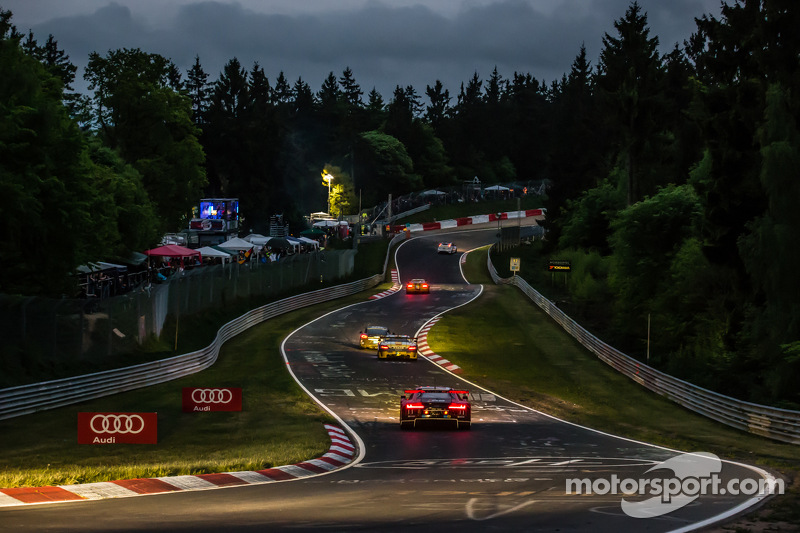 And now, about the technique

For those who are still reading and are interested in photography techniques, here’s your treat. This type of time exposure photo is fairly technical and mostly a matter of balance between getting as much light trails as possible in the frame while at the same time limiting the ambient light as much as possible. You want that shutter open for as long as possible up to the point of overexposure.

First thing to do is to dial the sensitivity of the image sensor down to ISO 50. Shooting RAW also brings some benefits as it allows correcting any over or underexposure issues. Frame well: if you want to get those light trails to be thick, try to frame as tight as possible with focal length of at least 70mm. All things being equal: the less focal length, the thinner the light trails will be.

Now, here comes the toughest part: aperture vs speed. You will definitely need to experiment here, but normally, you want that aperture to be as small as possible (in f-stop) in order to limit the light from entering the lens – always keep in mind that the longer an exposure is, the more light gets in. By experience, I know that there is a catch-22 in going for the smallest aperture as possible: details are somehow lost. So what I prefer to do is to block light using an ND filter and keep the aperture at a reasonable number, say f/13 (like this photo). In pitch darkness, simply going for the smallest aperture will work just fine, too.

For this one, the camera kit was placed on a tripod, controlled by the basic Canon remote switch, an ND 1.2 filter was used, the aperture was set to f/13, and the shutter opened for 2 minutes (124 seconds, to be precise), which was more than enough to get that red light trail well done and thick. I figure that I must have got at least 50 cars in the shot. 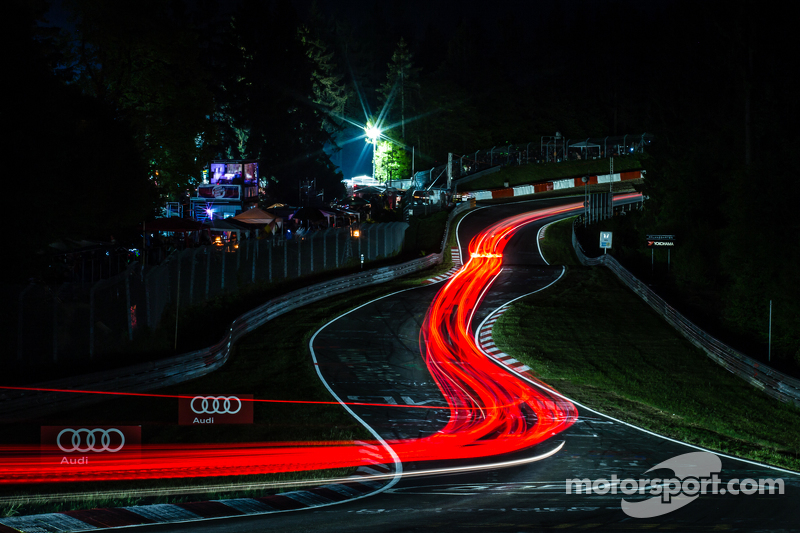 And the winner is…

In conclusion, time exposure shots tell a story different than normally exposed photos do. They are a sub-genre of racing photography at night, and therefore, a must-do in endurance racing. Mastering them requires planning and some knowledge about racing lines and race tracks. You will be rewarded with unique shots that convey emotion and atmosphere. Executed well, they can certainly be considered as genuine works of art worthy of being hung on a wall. 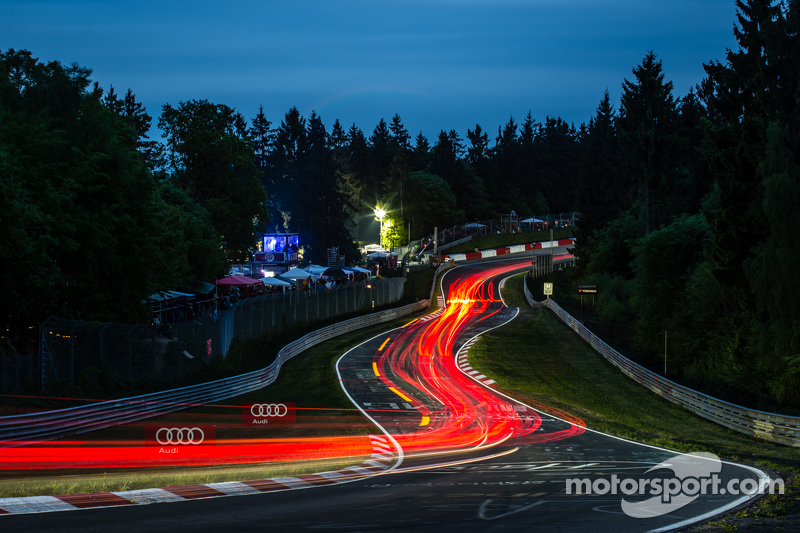 The Spirit of Le Mans: the story of an award-winning photo

Latest picture on my screen saver: 'S' like Simonsen