Vincent Vosse, Team WRT Team Principal: “I believe it was evident to everybody that we were completely out of pace and that our cars looked sand-bagged.

It wasn’t to be: this year’s Total 24 Hours of Spa-Francorchamps turned out to be a big disappointment for the Belgian Audi Club and Team WRT. The third place of André Lotterer-Frank Stippler-Christopher Mies, conquered with consistency and reliability after a tough and long catch-up throughout the entire race, has to be seen as an achievement for both the drivers and the team, but the team’s results clearly stayed below expectations. 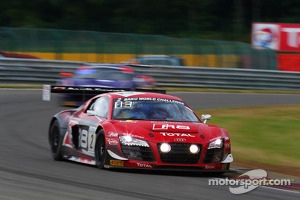 More than from the retirement of the other cars (because of a technical problem for Ortelli-Vanthoor-Rast and following race incidents for Ekström-Sandström-Fässler and Mayr-Melnhof-Frey-Halliday), the frustration comes from the evidence that the Audis R8 LMS ultra were never in a position to compete with rivals, because of the unfavourable Balance of Performance.

The Spa result, though, leaves the fight for the Drivers’ and Teams’ Blancpain Endurance Series completely open. Frank Stippler and Christopher Mies are co-leaders and Team WRT is only 8.5 away from the top, with only one double-point race still to be held.

Wrapping up the weekend, a frustrated Vincent Vosse commented: “We did everything we could under the circumstances, and I want to thank the drivers and the entire team for their hard work and commitment. The podium finish, the third in three consecutive years, this time, tastes as a small consolation.”

Team WRT Team Principal added: “I believe it was evident to everybody that we were completely out of pace and that our cars looked sand-bagged. Our drivers tried to compensate and when you are always at the limit, the risks of race incidents is much higher, especially in heavy traffic.”

Since the practice sessions, indeed, the Audis R8 ultra were far from the top positions. The only R8 making it to the Superpole session that involved the 20 fastest cars in qualifying was the #1 of Laurens Vanthoor, thanks to an extraordinary lap by the young Belgian in the night qualifying.

Unfortunately, during the Superpole, Vanthoor touched the guard-rail at the exit of one corner damaging the body and the rear wing. “I guess I tried too hard to compensate the lack of speed”, commented Laurens.

Nevertheless, the race was to bring more disappointment. Car #1, which had climbed up to 5th position after two hours, thanks also to two safety-car periods, retired during the 4th hour after encountering a transmission problem. “It’s a real pity”, commented Stéphane Ortelli, “because we had catch up well, despite a little ignition problem, but then we started having trouble with the driveshaft and the gearbox, we don’t know what happened exactly.”

At the 6 hours mark, when a first set of points were awarded, the #13 of Ekström-Sandström-Fässler came 8th and the #2 of Lotterer-Stippler-Mies 10th , but soon after the #13 was involved in a contact with a lapped Ferrari, when Marcel Fässler was at the wheel.

“It had been a very difficult start of the race, it was very tough in the heavy traffic and we were sometimes in trouble to pass the Pro-Am cars, but the car was going better than in practice”, told the Swiss, “Unfortunately, then there was this contact with a slower Ferrari.

It was a Blanchimont, I decided to pass it on the left, but the driver didn’t see me and he hit me.” Despite damage on the rear right wheel not seeming too big, a thorough inspection in the pits revealed bent suspensions fixations which would have required a too long repair.

The retirement of the #0, which was in the top 25, came at mid-race, at 4:30 am, when a slow puncture sent Matt Halliday into the tire wall. “It had been a tough race already”, explained Niki Mayr-Melnhof, “it was very difficult to get a good pace at the beginning, with so much traffic and very hot weather. We also had a couple of contacts, and then the final incident. It was definitely not our year.”

Eventually, it was the #2 of André Lotterer, Frank Stippler and Christopher Mies the only survivor. The car made it to the top 5 right after mid-race and stayed in contention for a podium finish during a number of hours, before a change of brake pads and a spin of Lotterer in the morning stabilized it in fourth position.

“It’s a very, very tough race, we’re always on the limit to try to stay on a good pace, and that means driving on the edge all the time”, commented Stippler. A retirement in the closing phases of the race eventually brought back the car to third and to the podium.

The team is now to take a well-deserved break before resuming activity in the FIA GT Series on 17-18 August at the Slovakiaring. The fifth and final round of the Blancpain Endurance Series is scheduled on 21-22 September at Nürburgring.