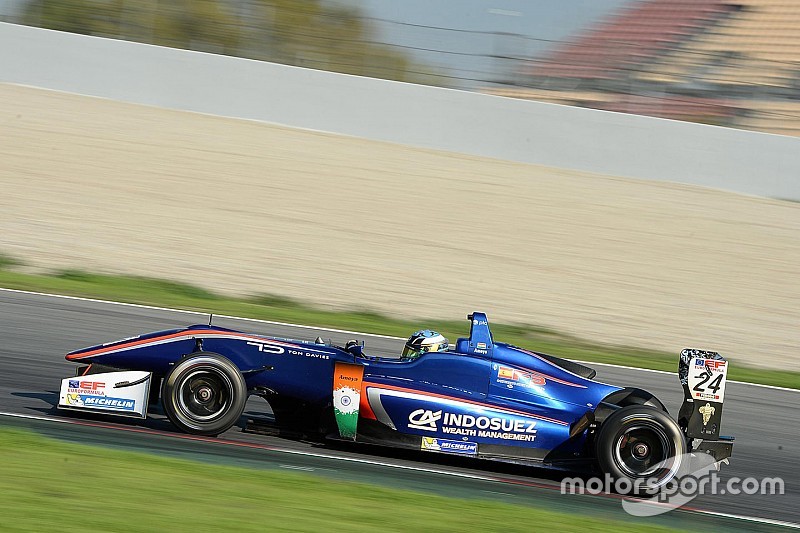 Vaidyanathan qualified fifth on the grid for the first of the season finale’s two races and was able to sprint past slow-starting Lorenzo Colombo and Nikita Troitskiy on the run down to turn 1.

On lap 7 race leader Felipe Drugovich went off at turn 4, promoting Vaidyanathan up to P2. The off-track moment coincidentally took place just after the safety car was called due to an incident between Cameron Das and Joey Mawson.

The SC stayed out for a few laps while the wrecked cars were recovered, before the race resumed on lap 10.

Vaidyanathan tried to pass new race leader Devlin DeFrancesco at the restart, but was instead forced to fend off Troitskiy from behind.

The two drivers went side-by-side in the opening sequence of corners, with the Indian just managing to stay ahead.

Meanwhile, DeFrancesco started to pull clear in the lead, eventually winning the race by a margin of 1.583s.

Vaidyanathan got rid of the pressure from Troitskiy after the Russian made a mistake and dropped behind Alex Karkosik, ensuring a 1-2 finish for Carlin.

The other Indian contingent on the grid, Tarun Reddy, retired on the opening lap after a collision with Ben Hingley.

The final race of the 2017 EF Open season will take place tomorrow, with the grid to be decided on the basis of a separate qualifying session, also scheduled for Sunday.