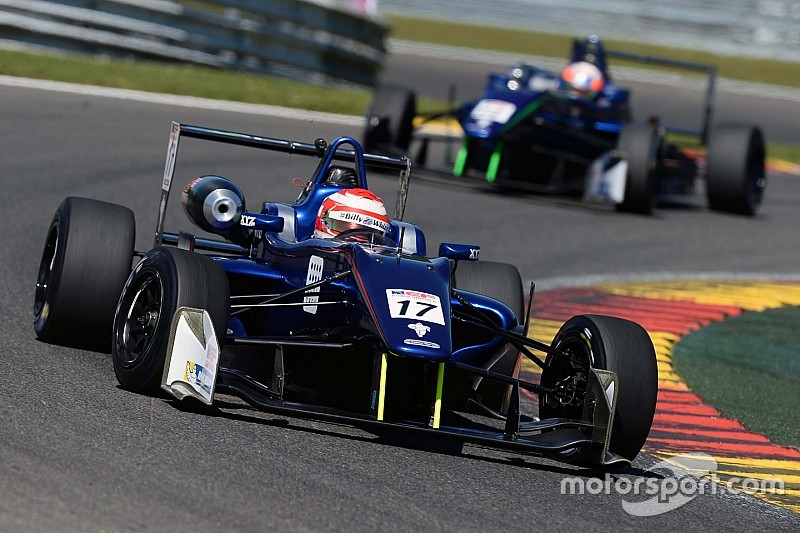 Toronto’s Devlin Defrancesco has doubled up on podiums for Carlin this weekend, having taken a further second position on Sunday afternoon.

The Canadian racer claimed second place in the first race of the meeting as the weekend’s racing action at Silverstone in the Euroformula Open Championship came to a conclusion. He lined up on the front row of the grid of Race 2, confident of replicating his great podium finish. As it was off the line, he was once again a great starter and kept his position as he took his Carlin car through the first corner.

He maintained a good gap to Jannes Fittje and was running a race in relatively clean air around him. Very few moves for positions occurred over the final laps of the race and it was Defrancesco who took another brilliant second position.

After going 13th fastest in free practice, Canadian Nicholas Latifi struggled for pace in the red flag-affected qualifying session and started was 14th in the FIA Formula 2 meeting in Monza, Italy.

“We started on the back foot in practice and I didn’t get a great feeling for the car. I put all my best sectors together in qualifying, but we just didn’t have the pace here,” Latifi said.

The Toronto native made good ground in the late-starting Feature Race, climbing up to seventh before the pit stops. Keeping his nose clean in a chaotic final two laps, he climbed to third place in the final results. He started well on Sunday, but fell to 16th with tire wear.

“I made sure not to have contact in the Feature Race, which is important in those conditions and it was great to score some big points,” he declared. “I thought I could fight for the win on Sunday, but really struggled with the tires for the first time this year.”

Victory for Nick Wittmer in Texas

Nick Wittmer finished first in Saturday’s Race 2 of the Pirelli World Challenge event held in brutal weather with temperatures up to100 degrees of humid heat at Circuit of the Americas in Austin. In Race 1, Wittmer’s teammate at ST Racing Team, Samantha Tan’s finished 14th while Nick started from third place and arrived home second.

On Sunday, the ST Racing crew made some changes to the cars, hoping to add even more speed to the cars. Wittmer started on pole while Samantha Tan was 13th on the grid. Tan’s car was playing tricks on her just before going green and that affected her start. She finished 14th out of 44 cars. As for Wittmer, he pulled everything he could out of his BMW 235iR to make it a flag-to-flag win, but not without non-stop wheel-to-wheel battles from beginning to end.

Raphasël Lessard, the driver of the No. 99 Toyota Camry FRL Express/Toyota-TRD/JBL Audio prepared by David Gilliland Racing qualified 6th with a fast lap of 15.549 seconds on Saturday. The Canadian teenager made it to the top 5, but during the restart of the race’s first caution at Lap 6, Lessard got hit by a competitor, which generated another caution.

Damages obliged Lessard to pit, forcing him to get back into the race in 10th position once his crew inspected and fixed some of the damages. Despite driving an ill-handling car, Lessard climbed up to third place by Lap 63. He passed Travis Braden for second place, but on Lap 86, the two traded places. Lessard eventually crossed the line in third place.

“The others guys around me were much faster because they had no damage to their cars and their tires were well managed,” Lessard declared. “I think that a third place finish is not that bad given I was hit by a competitor at the beginning of the race. I can’t thank David Gilliland Racing and Toyota enough for their hard work. We have been here for three days and the car was perfect.”