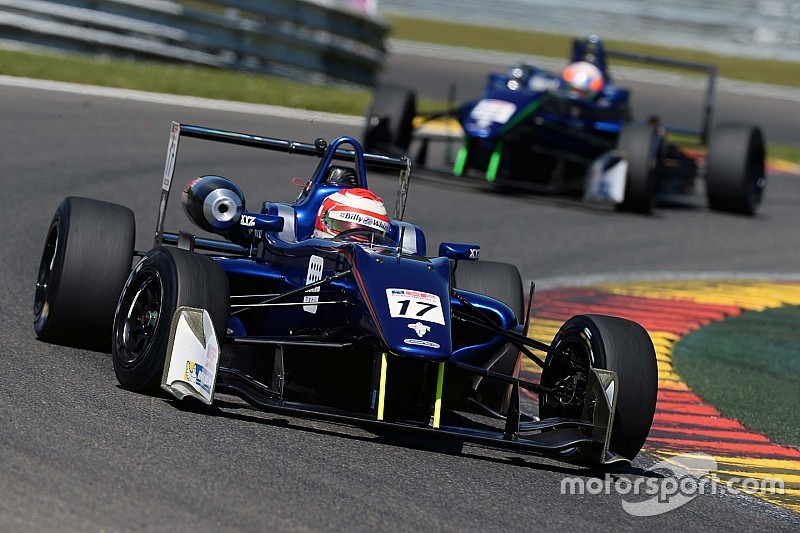 Canadian racer Devlin DeFrancesco climbed twice on the podium of the Euroformula Open as the series hosted its second round of the season at Spa-Francorchamps.

The Toronto-native took the start of the first race in fourth place and quickly moved up to third place on the opening lap. He then closed the gap to second, but ran out of laps and had to settle for third at the chequered flag.

The next day, typical Spa rain soaked the second qualifying session. DeFrancesco qualified fifth, took a very good start and was up in second place at Les Combes.

Two laps later, DeFrancesco went around the outside of Race 1 winner Ameya Vaidyanathan at the same corner to take the lead. However, he could really defend himself to the slipstream from Harrison Scott and eventually crossed the line in second.

This result moved DeFrancesco up to third in the drivers’ overall standings. “It was an amazing weekend for us. We came here with the goal of being on the podium and that’s exactly what we did!” said DeFrancesco.

“We got a decent start in Race 1 and I was able to get up to third early on. After that I started to catch second, but wasn’t able to mount an attack before the end. Still, I was very pleased with third and first of the rookies.

“For the second race I got an awesome start. There was a crazy battle on the run to Les Combes and I came out in second. Then I caught my teammate and overtook him around the outside at the same corner. He spun, but we didn’t make contact. It was tough to hold on though because the guy behind had such a good tow, I couldn’t do anything to defend against it and finished second,” he explained.