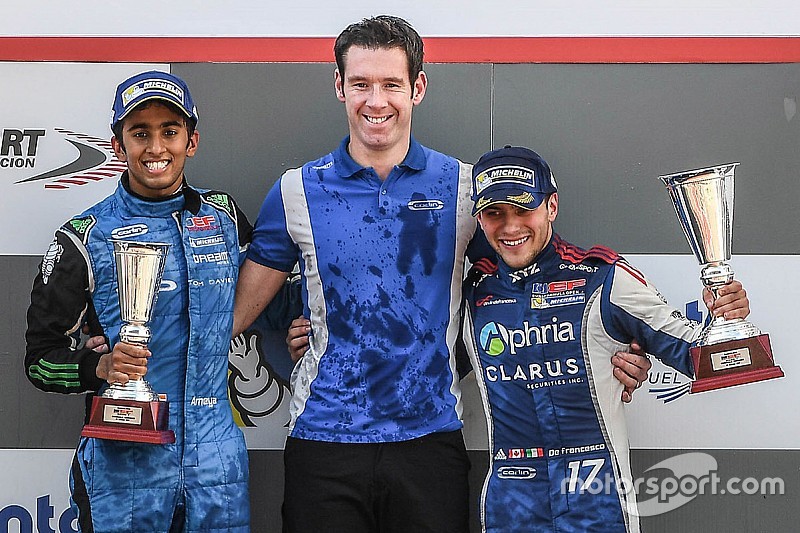 Toronto’s Devlin DeFrancesco scored his first victory in the final round of the Euroformula Open, claiming third place in the series and the title of the Spanish F3 Championship.

The 17-year-old Canadian qualified third for the first race of the meeting. He went on to win the race, crossing the line 1.583 second ahead of his Carlin teammate, Ameya Vaidyanathan. For Race 2, DeFrancesco qualified sixth and arrived home in fifth place.

DeFrancesco made a storming start in Race 1 to slip into second place before Turn 1. He then put pressure on the leader, who made a mistake and went off the track on lap six. The young Canadian remained unchallenged for the remainder of the race to take a maiden victory and locked-in his position at the top of the Spanish F3 standings.

“I was happy with the start and knew I could close the gap to first,” he said. “We were much quicker in the middle sector, then there was some spilt oil on the circuit at Turn 4 and [Felipe] Drugovic went off whilst the safety car was out. I made an unbelievable restart and just managed the gap behind. We’ve really been up against it all year. I’ve felt like the team deserved this and I’m just so grateful for my engineers and everyone who’s helped me.”

Lining up in sixth for Sunday’s race after struggling with a rear anti-roll bar issue in qualifying, DeFrancesco made another strong start to move into fifth, exactly where he needed to be for third in the championship. The youngster kept a cool head under pressure to hold his position and cement third place in the drivers’ championship.

“I was quite stressed ahead of that final race!” Devlin said. “I got a good start again though and when I realised all I needed to do was bring the car home in this position, that’s exactly what I did.”

The Italian-Canadian is also the youngest Spanish F3 Championship-winner in history, after picking up three wins and five podiums out of six races.