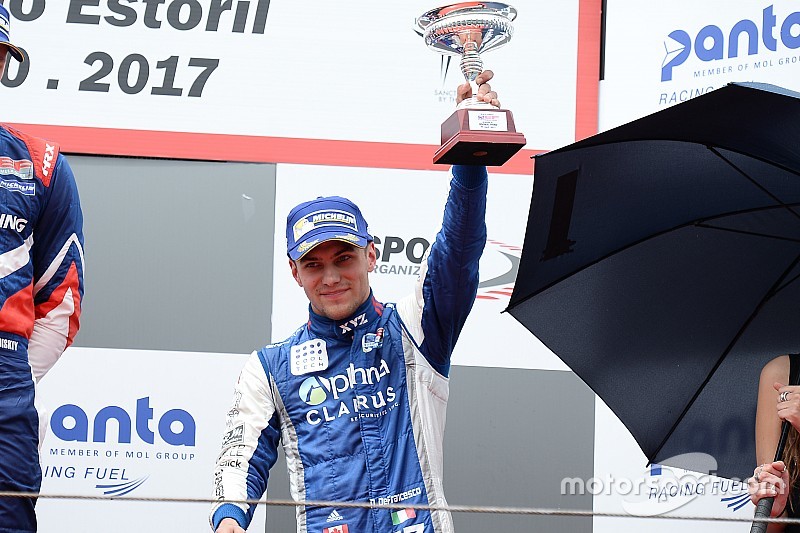 DeFrancesco began his first weekend in the two-litre Toyota-powered Formula 3 car on a good note in Estoril, Portugal, as the F4 British Championship front-runner posted the sixth fastest time during Saturday's qualifying session.

The Canadian was involved in a top-five battle in Race 1 when he made contact with Alex Karkosik. He was forced to retire four laps from the end but was eventually classified 12th.

In Race 2, the 17-year-old Carlin driver powered on from 9th on the grid and quickly caught the top-five, before pulling off a fine move on the last lap to cross the line in fifth and third of the rookies.

“It was a really encouraging start to the championship for us. In the second race we were quicker than the cars in front and had the qualifying gone a little better, I think we could’ve challenged for a podium,” said Devlin DeFrancesco after he stepped down from the podium.

“The car improved throughout the weekend and after the first race, I was pretty happy with my pace. Despite the result, I always felt confident about my chances in race two.

“I made a mistake in the final corner in the second qualifying session and knew I had to work hard for a good result in the race. At some point, we were one of the fastest cars on the track and to climb up to fifth by the end is really promising for our next few races.”

DeFrancesco sits eighth in the Drivers’ Championship and second in the Spanish F3 Championship, as he now looks ahead to Round 2 at the fantastic Spa-Francorchamps circuit in Belgium at the end of May.