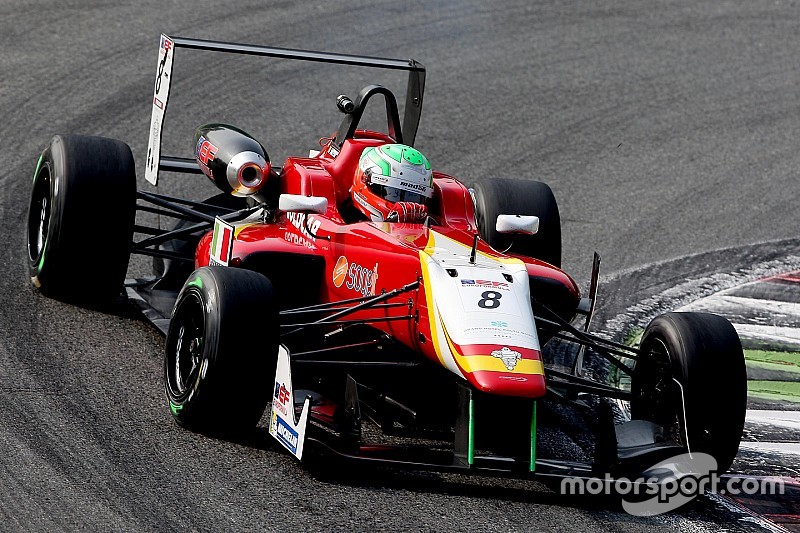 Leonardo Pulcini extended his Euroformula Open championship lead with two thrilling victories in the sixth round of the 2016 season at Monza.

Polesitter Damiano Foravanti dropped to third after a bad start in Race 1, losing his lead to Fortec’s Sam MacLeod going into the first corner, with Pulcini slotting into second.

But MacLeod’s run up front lasted only for a lap as Pulcini made short work of the British driver to take the lead and Fioravanti also moving up to second on the next lap.

With Pulcini and Fioravanti gone into the distance, MacLeod had whole bunch of cars behind him led by Drivex Ferdinand Habsburg.

In the next couple of laps, Ahmed, Menchaca and RP Motorsport’s Antoni Ptak also cleared MacLeod, as a four-way fight brewed for fourth place, led by Ahmed.

Up ahead, Pulcini and Fioravanti lapped the circuit at similar pace, but the Campos driver had enough to keep his lead and take the win, with Fioravanti registering his best result of second.

Habsburg completed the podium, as Ahmed just managed to hold off teammate Ptak by 0.546s, the Polish driver having overtaken Menchaca early on.

RP Motorsport’s Tanart Sathienthirakul was the last car in the four car battle to end seventh, with BVM’s Ye Hongli a distant eighth.

Meanwhile, Carlin endured a torrid day, with Colton Herta was forced to pit from fourth after damaging his front wing, ending 16th ahead of Indian teammate Ameya Vaidyanathan.

Keyvan Andres in the third Carlin retired in the opening lap from seventh on the grid.

The second race saw rookie Troitskiy start from pole, as he led the race into the first corner with front-row starter Herta dropping down the field. Pulcini slotted in second with Habsburg third.

While Troitskiy extended his lead up front, Pulcini lost a couple of places to Habsburg and Ahmed - the former going for a brave move around the outside of the Italian.

Meanwhile, Habsburg soon caught his teammate Troitskiy and passed the Russian for the lead, at the same time when Pulcini took Ahmed for third.

It was not long before the Campos driver was threatening Troitskiy, Pulcini then dispatching the SMP-backed driver to slot into second before chasing down race leader Habsburg.

The two then had a fantastic battle for the win in the last few laps, trading places with both having off-track moments until the final lap and the final corner.

After getting a better tow at Parabolica, Pulcini took the lead and the win from Habsburg, just 0.452s separating the two over the finish line.

The duel allowed Troitskiy to catch up, with the Russian completing the podium only 0.009s behind his Drivex teammate Habsburg in the end.

Behind the top three, Herta, having dropped to eighth, clawed his way back to finish fourth, overtaking Ahmed towards the end of the race.

A heavy clash between Campos teammates Menchaca and Julio Moreno on the penultimate lap allowed MacLeod to move to sixth, who had enough to hold off Andres.

The Carlin driver in turn kept Hongli at bay to end seventh, with Sathienthirakul and Zlobin completing the top 10.

It was disaster for Ptak, who crashed out from the fight for fifth, while Carlin's Vaidyanathan survived a spin to end a modest 14th.