Lewis Hamilton’s X44 squad clinched the Extreme E title in a highly-eventful season finale, as Abt Cupra took a maiden win in the Energy X-Prix in Uruguay.

Nasser Al-Attiyah and Klara Andersson bounced back from a penalty in their qualifying heat to win the final for Abt, ahead of McLaren’s Tanner Foust and Emma Gilmore, but third was enough for X44’s Sebastien Loeb and Cristina Gutierrez to seal the crown.

Hamilton’s squad secured the crown after all three of its title rivals failed to progress to the final, but the decisive result only came after a time penalty cost Andretti’s Timmy Hansen and Catie Munnings a podium spot at the finish.

Defending Extreme E champions Rosberg X Racing led the standings by 17 points at the start of the deciding event, but an incident-filled two days for the defending champions started with a roll for Mikaela Ahlin-Kottulinsky in qualifying and ended prematurely with elimination in the Crazy Race.

Having likely secured five additional points for the best time in the Traction Challenge, X44 needed third or better in the final to overhaul RXR in the standings.

But Loeb ran wide after the start while battling with Al-Attiyah and dropped to fourth and then made contact a couple of times with Hansen as he tried to recover.

Al-Attiyah built a 3.3-second advantage over Foust before the driver swap, with Andersson maintaining that gap on the second leg to give Abt victory. Gilmore held off Munnings for second, with Gutierrez finishing a further two seconds adrift after taking over from Loeb.

But a seven-second penalty for speeding in the switch zone crucially dropped Andretti to fourth, to promote X44 up to third and with it the Extreme E title in the series’ second year. 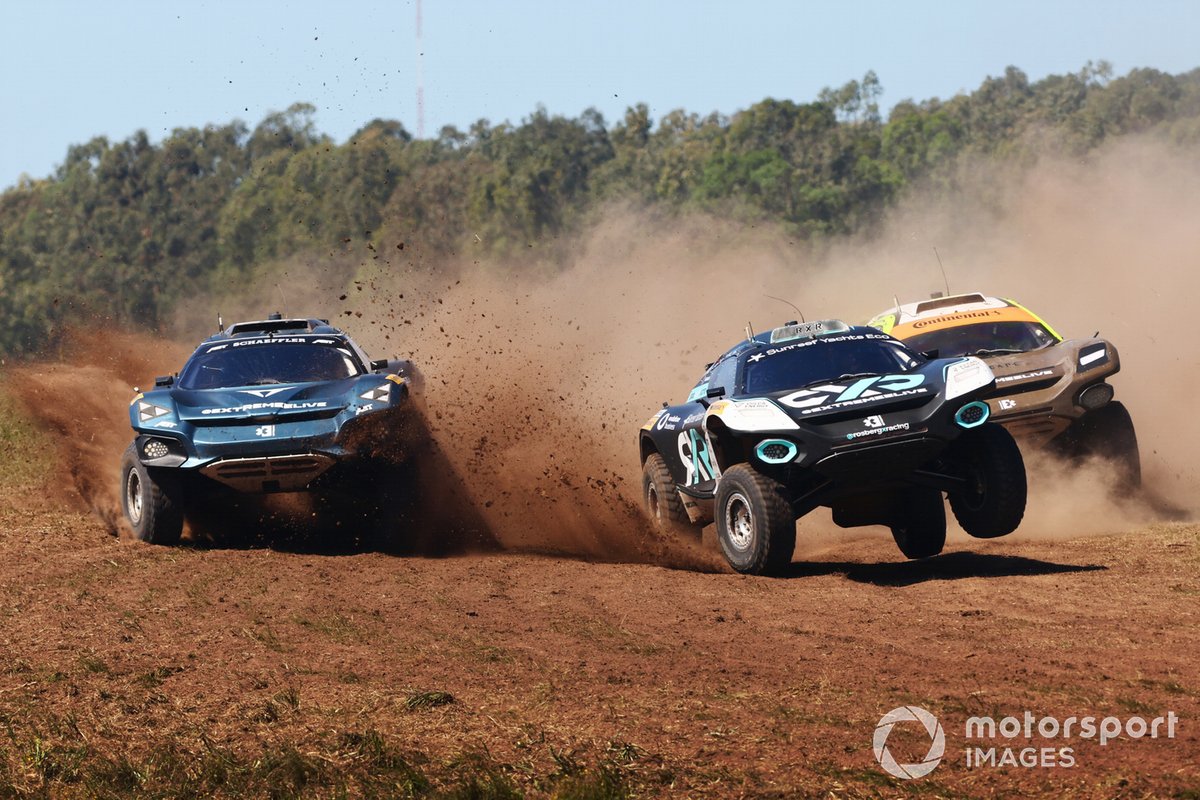 X44s route to the final was far from easy with Gutierrez cartwheeling out of single-car qualifying, and it then came home a distant fourth in its qualifying heat, which was won by Andretti, despite a five-second penalty for a switch zone infringement.

RXR retired from the subsequent heat after Johan Kristoffersson was rear-ended by Al-Attiyah as the pair contested the lead. Abt won on the road after Andersson passed Taylor following the driver change, but a 30s penalty for the incident with RXR handed victory to Veloce.

Veloce again triumphed in Sunday’s opening semi-final as Chip Ganassi Racing’s remote title hopes came to an end. Ganassi’s Sara Price lost control on a bump approaching the first turn before making contact with Taylor and collecting a flag at turn one. Andersson gave Abt a slender lead ahead of Taylor at the driver change, while Price overcame a 10-second deficit to catch the pair, but was carrying two 10-second penalties having struck a second flag.

Abt lost out in a three-wide battle exiting the switch zone, with Al-Attiyah forced to back out. RJ Anderson (Ganassi) lost his door in a feisty lead battle with Veloce’s Hansen, who eventually prevailed to take the win, with the time penalties costing Ganassi the second final berth to Abt.

Munnings muscled her way past Acciona Sainz’s Laia Sanz to lead the second semi-final, with Gilmore then snatching second. As she tried to fight back, Sanz hit a rut and rolled twice, but was remarkably able to continue. But Sanz and Carlos Sainz’s title chances came to an end after eventually finishing a distant third. Hansen kept Andretti in front following the driver change, with Foust also putting McLaren into the final.

That left RXR and X44, the remaining two title contenders, to fight over the last final berth in the Crazy Race. Victory would have sealed the crown for RXR, but its hopes unravelled when Ahlin-Kottulinsky collided with JBXE’s Hedda Hosas, incurring steering damage, while Hosas retired on the spot.

Despite carrying a five-second penalty from a qualifying infringement the day before, X44 took a crucial win ahead of Xite Energy’s Tamara Molinaro and Ezequiel Companc, while RXR was disqualified for having too many personnel in the switch zone while repairing its damaged machine.

Why is CUPRA coming to Formula E and what's its goal?