The nine-time World Rally champion and his Dakar Rally regular teammate were by some way the class of the field on Saturday morning at the Teulada NATO base as they bolted to the top of the times with their combined run of 11m05.105s to lead by over 12 seconds.

As occurred on Friday in practice, a high rate of attrition came to impact the nine teams.

In a very slow start to the first of the two qualifying runs, the opening three crews all suffered incidents, with both Xite Energy Racing and Chip Ganassi Racing retiring on track.

Three-time World Rallycross champion Johan Kristoffersson was the first driver to take to the 4.37-mile course at the wheel of his RXR machine before handing over to Taylor.

But for the second event in a row, the Australian rally champion rolled before landing upright and being able to complete her run in spectacular fashion.

The Saudi Arabia and Senegal Extreme E event winner ran sideways over a crest and as the Odyssey 21 skidded off the clear racing line and into the deeper unused dirt, the wheels dug in and she flipped.

Taylor, whose slide had likely been initiated by hitting a stone that forced the steering wheel in her hands, was able to land on the wheels and continue with only rear bodywork damage.

She brought the entry home with a 11m37.557s benchmark before Chip Ganassi Racing’s run was ended after just the fourth of 28 gates on Sara Price’s lap by a suspension failure.

The American squad’s torrid fortunes continued when the rear of the car was unsettled over a series of crests and Price clipped a marker that was signposting a boulder. 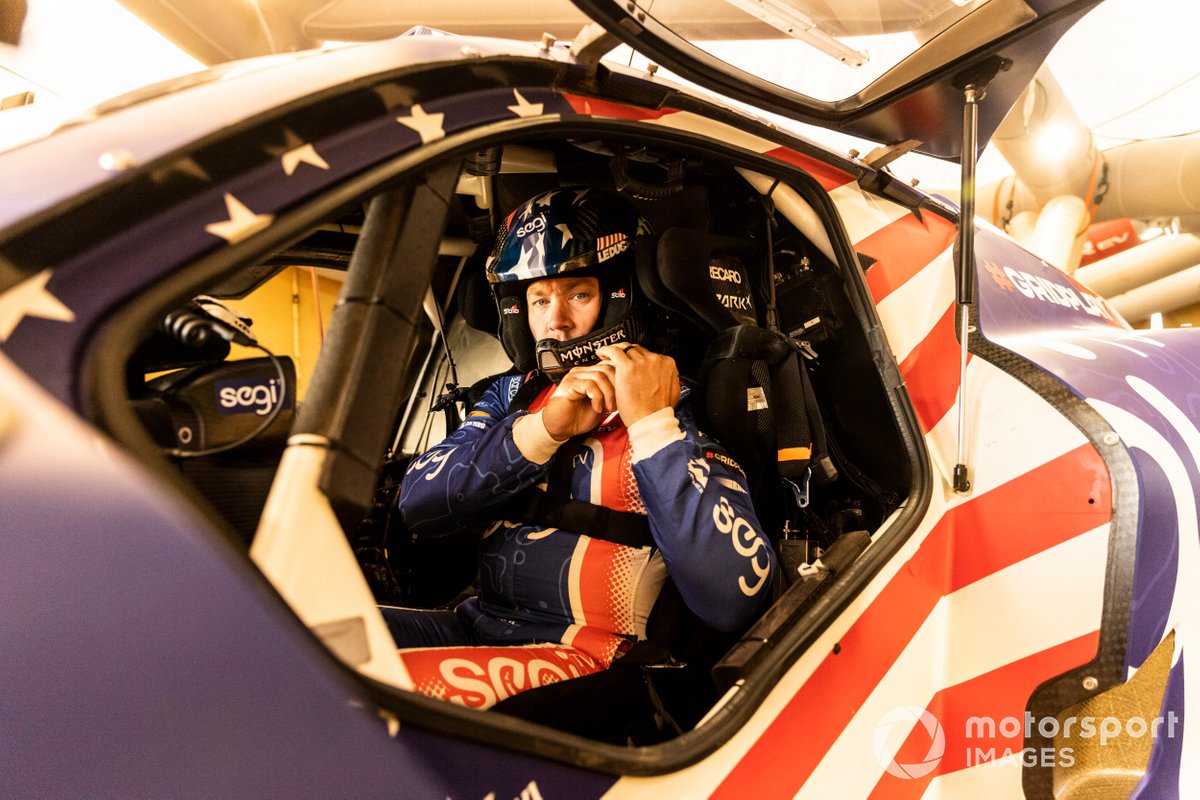 Price caught the hidden rock to cause the left-rear corner to collapse and she retired on the spot to leave her teammate Kyle Leduc without a run.

Next on the course was Xite Energy Racing, which also had to abandon a flying run when Christine Giampaoli Zonca endured a steering break through her run.

The car’s set-up appeared wide of the mark as she and teammate Bennett were unsettled by bumps prior to the toe-link finally giving way and forcing the front-right wheel to bend in.

That preceded the X44 entry, which again did not pass without drama.

Spare-time orthodontist Gutierrez lost the rear and spun through the bushes in the tight ‘super sector’ section but was able to continue before handing over to a rapid Loeb.

Her 4m25.503s single lap was comfortably quickest to give the team an initial 32s advantage over RXR in an effort Loeb told Motorsport.com that he reckoned he would not be able to match.

The duo would remain on top when Andretti United’s Hansen hit a small bump very early into his lap to trigger the latest in a string of electrical power steering failures for the grid.

The extra forces exacerbated a pre-existing injury and his shoulder popped out three times before he entered the driver changeover zone to hand over to stablemate Catie Munnings.

Munnings reset the systems to resolve the issue for her trouble-free run to score seventh.