X44 driver Sebastien Loeb reckons “it’s not a surprise” he and Cristine Gutierrez landed the first-ever Extreme E pole position but accepted Rosberg X Racing was “faster than us”.

Loeb and Gutierrez were second-quickest in the opening qualifying time trial run on the 5.48-mile course in the AlUla desert in Saudi Arabia, despite Loeb losing six seconds for running off line.

The duo was beaten in the afternoon session by 4.7s courtesy of the unmatched run from RXR pair Johan Kristoffersson and Molly Taylor, only for the squad to lose pole to a penalty.

Nine-time World Rally champion Loeb told Motorsport.com that he expected X44, which is run by Prodrive, to deliver early on but admitted that he and Gutierrez had held pace some back for the opening day.

He said: “It’s not a surprise. For sure, we were hoping to be able to fight for the victory here.

“But the fight [in qualifying] was really intense. The Rosberg team was really fast, maybe even a little bit faster than us overall.

“But we didn't also want to push too hard because we saw many crashes and problems. We were just hoping to do clean runs. It's what we did.” 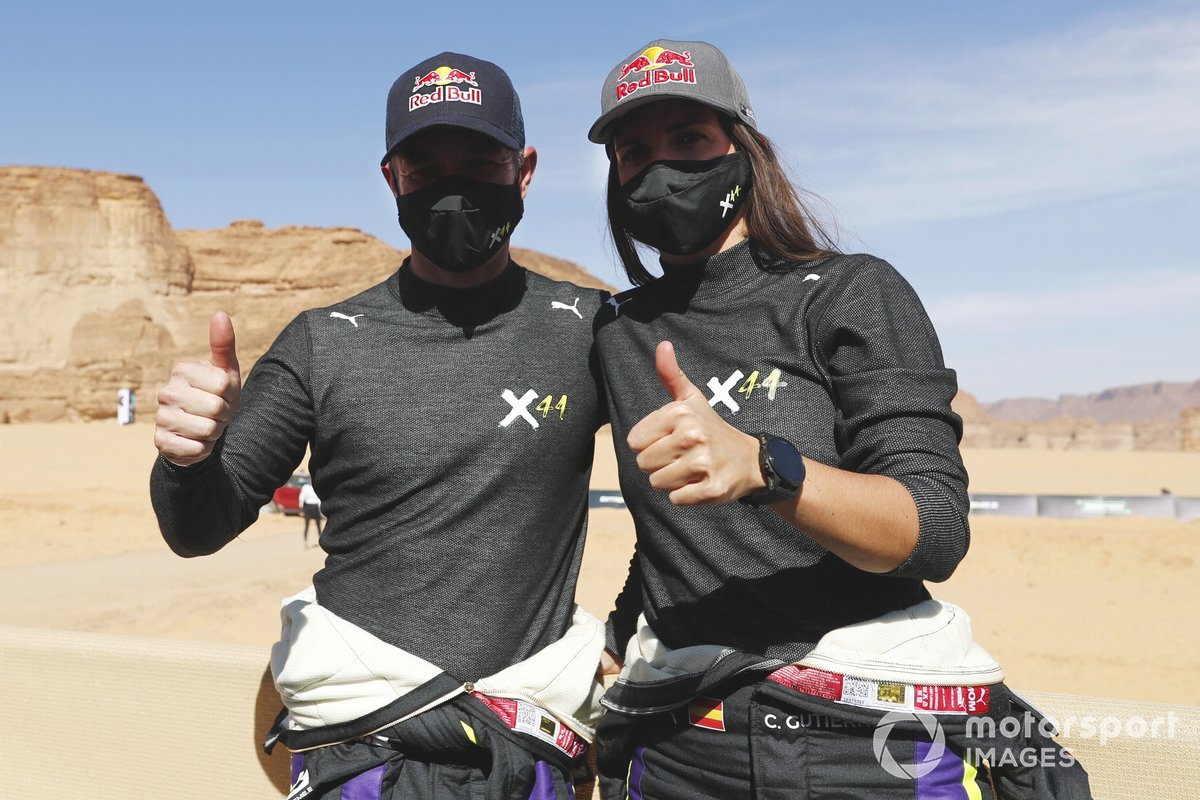 Sebastien Loeb, X44, and Cristina Gutierrez, X44, celebrate being fastest at the end of qualifying

RXR copped a 60-second time penalty when Taylor exceeded the 30km/h speed limit in the driver change over zone, which relegated the squad down to third in the combined times.

Loeb added that he had anticipated RXR, a development of the Team Rosberg DTM outfit, to be X44’s closest match prior to the season starting.

“We expected our main rival to be Rosberg's team," he said. “I struggled with Kirstoffersson a lot of times in [World] rallycross. I know Molly is also very fast.

"At the end, they made a little mistake in their driver change and they got a penalty. I really had a fight with the car to keep it straight and keep it in line.”

Gutierrez, a spare-time orthodontist signed by Prodrive after impressing founder and chairman David Richards on the Andalucia Rally, said smooth runs were key as the course deteriorated with each lap.

“I'm very happy to the qualification because finally, we did the pole position.

“Because everyone had problems, mistakes, we did the very clear race and we were very happy.

“It's important be clear, especially in this track, because you have a lot of holes and drops. Each time we pass it's much worse, so it's important to be clear.”

Extreme E co-founder Alejandro Agag admitted, when asked by Motorsport.com, it was a "not bad" for his championship that it had launched with the "good story" of Lewis Hamilton's X44 team topping the first qualifying shootout.