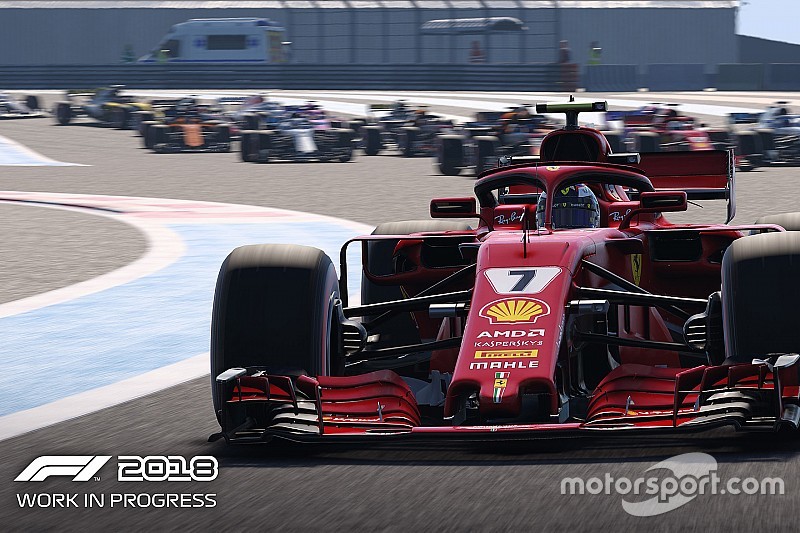 Formula 1’s latest official computer game launches this week, with Codemasters again doing more than simply adding a lick of paint to the series for its annual release.

While F1 continues to restrict the features of its own game in too many ways in some areas, the team behind the series has introduced new features, and expanded or improved major parts of the 2017 edition.

Ahead of the release, Motorsport.com picks out 10 key points worth knowing about F1 2018.

Be prepared to race hard 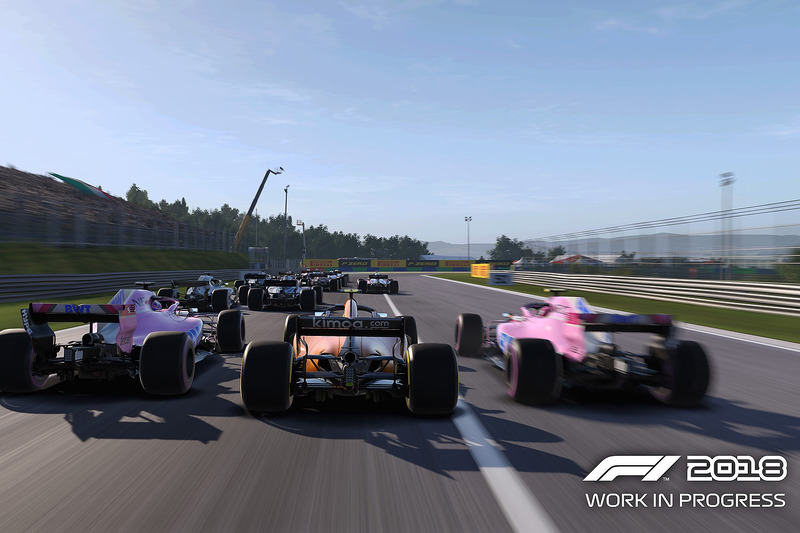 The computerised opponents in the F1 series have been fun to race against since an overhaul of the AI behaviour in 2015, but after a few years of minor improvements since then, it’s been injected with a major dose of extra ferocity for 2018.

Brace yourself for first corner lunges from your rivals at the start, more intelligent defensive driving (it’s much harder to surprise an AI driver with an unconventional pass attempt – they’ll just cut you up!), being given less space in wheel to wheel battles, and brave dives to the inside or outside on the brakes. You’ll genuinely need to defend your position now.

If anything, it’s made the in-game racing much more exciting than the real thing, so you can come away from a battle feeling blown away by how hard your opponents have become on track. From our experience so far, Max Verstappen and Fernando Alonso are two drivers to tread very carefully around. 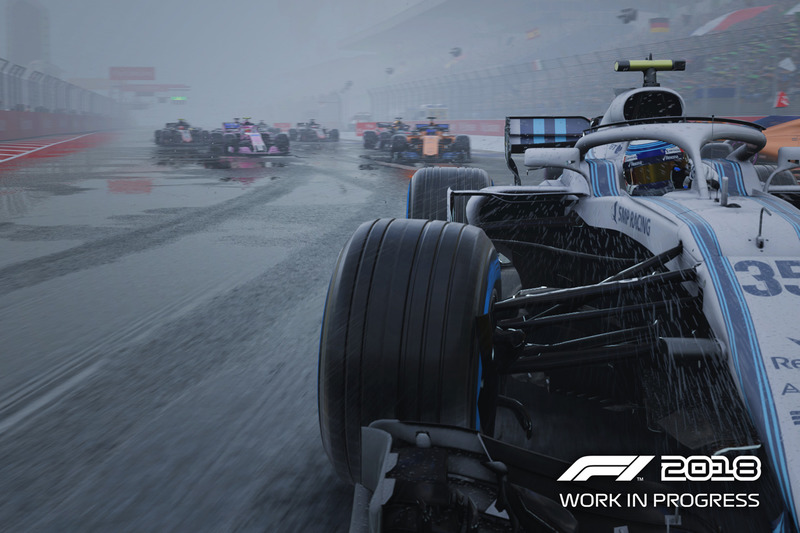 Taking in an entire grand prix weekend can be mightily engrossing, but it also takes up swathes of free time. That simply isn’t practical for a large chunk of the game’s audience.

But the ability to skip along to one-shot qualifying and run a quarter-distance race doesn’t gut the game of experiencing F1 because you will still earn significant upgrade points to begin car developments, many of which are more affordable than they were in the 2017 game as well.

Playing the right game in the media (see below) can also accelerate your team’s development potential, and you will often be set weekend goals to earn extra R&D points, so there are ways around having to complete the full set of practice programmes each weekend just to keep up in the development race.

It means even those with limited time can theoretically play the full 10 seasons, a welcome change that means everyone can experience the full-blown development war of teams climbing and falling down the grid. In F1 2018, that also includes rule changes, which can shake the order up over the course of a single off-season. 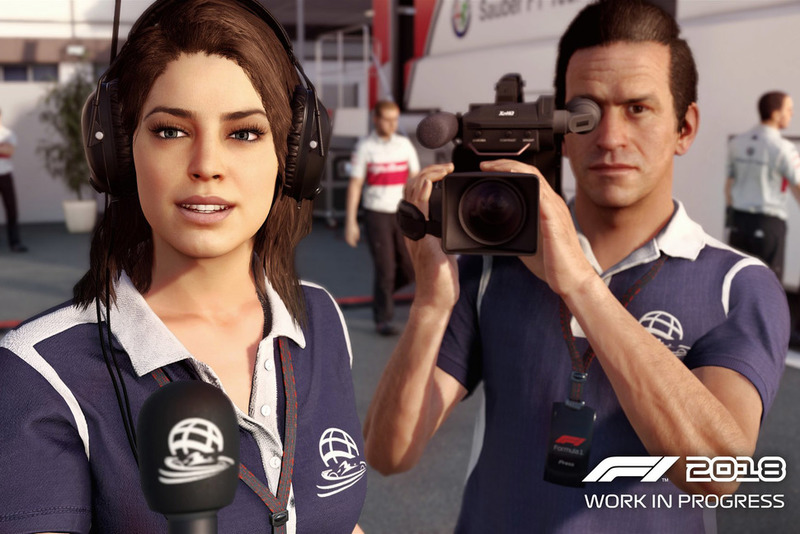 Media interviews are back in the career mode this year, and they are far more interesting and relevant than they were in the past. You’ll be ambushed either in the pitlane or behind the garages in the paddock after some sessions, with a wide variety of questions fired your way.

It’s impressive how often the questions relate to specific incidents in a race, or a running theme in your career. If you collide with a driver from a rival team and then blame him for it afterwards, it’s going to upset that team and reduce your reputation in its eyes.

You can also use the media to your advantage, as questions about the specific performance areas of the car can have an influence on morale back at the factory in certain departments, which can speed up or slow down developments. 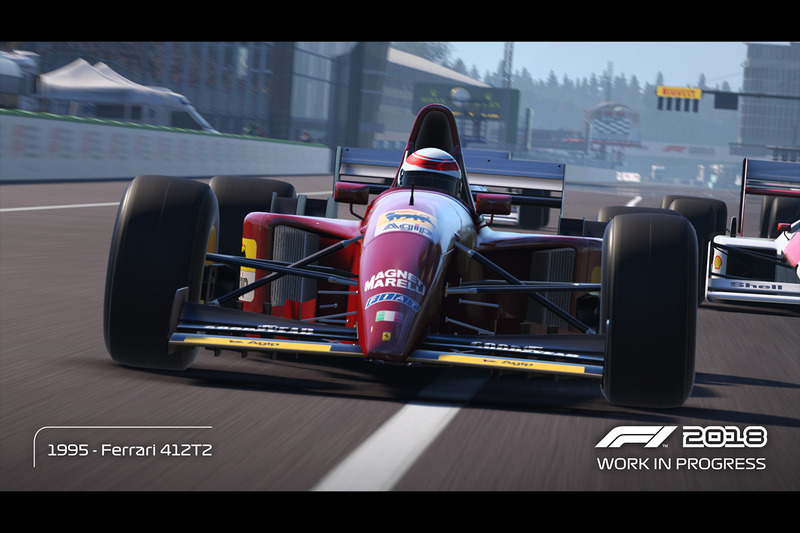 There’s a new class of classic cars for this year, with the ‘C3’ category for cars from the 1970s (featuring Lotus, Ferrari and McLaren) plus the 1981 McLaren MP4/1 added to the roster. The 2003 Williams and 2009 Brawn are also available as an extra purchase.

The new cars are fun to drive, and it seems all the classics have had their handling tweaked to make them more fun to use. Players have the option to run all three classes in a race, although that inevitably means the pack you can fight against in each class is reduced.

One drawback that limits the potential of the classic cars remains from F1 2017: Codemasters does such a good job at accurately representing the differences in performance between the cars, some of which are separated by several years of real-world development, that even within each class (loosely covering the 1970s, 1990s, and 2000s) the field can be quite spread out, leaving you only battling any opponents racing the exact same car you have chosen.

Classic circuits remain off the table at the moment, largely because building the new environments is such a huge undertaking for the game’s creators. 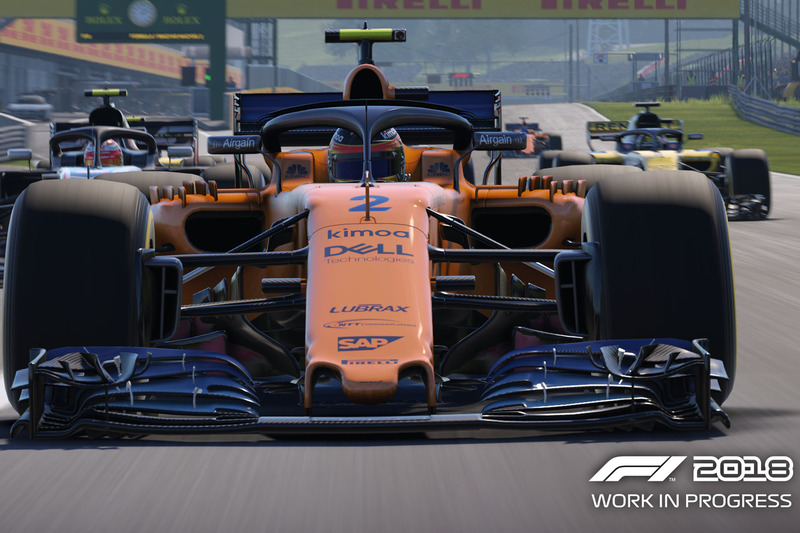 We’re so far into the F1 season now that the appearance of the halo is no longer a major talking point, but this is of course the first time it has featured in the game.

From most camera angles it doesn’t affect your view, while for others – such as the over-the-shoulder on board camera position, which surely nobody uses to race with – it’s clearly in the way.

What’s most interesting here is Codemasters’ approach to the cockpit view. As an on-screen experience doesn’t allow the game to replicate our eyes’ ability to look past the narrow central pillar, any players who find it too intrusive can remove just that part, maintaining the halo around the top, but with a clear view straight ahead. 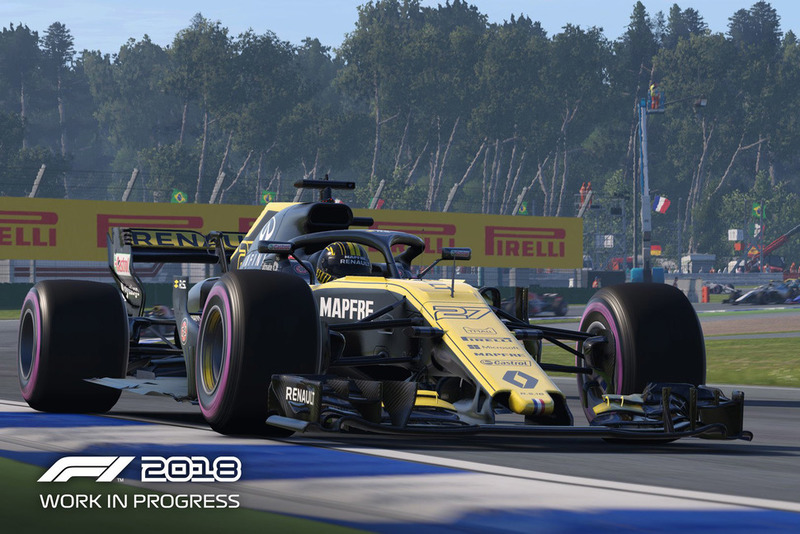 With stable regulations and inevitable car improvements, the peak-performance handling of the 2018 cars is slightly better in this year’s game, effectively making them easier to drive.

That will trouble some players who believe that simulation handling should mean the car is nearly impossible to keep in a straight line, but Codemasters is right to have explained that as the cars improve in the real world they become easier to drive.

However, along with the improved handling, there have clearly been refinements to the knife-edge aspect to modern F1 car performance and tyres, with the cars more sensitive to certain types of aggressive kerbs, steering inputs, or worn out Pirellis, so under certain circumstances it’s easier to spin the cars than it was before. 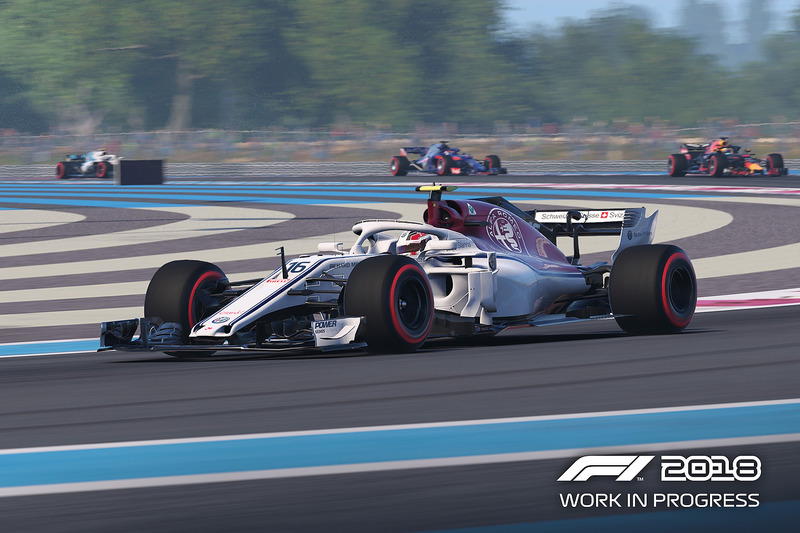 A good example of the level of depth the game offers hardcore players is the introduction of manual ERS settings.

The best way to explain it – if you are brave enough to opt for manually controlling your power modes – is like a busy version of the fuel mixture management, as it can require more changes per lap than the fuel modes do.

You have various settings ranging from full power to what is effectively a recharge mode, and the difference in straightline speed is noticeable.

You can be in a battle with a car in full power mode, ready to pounce, but if you run out of electrical power and have to knock it down to the lowest setting, your rivals will drive away from you even if you are in their slipstream.

If that sounds a bit complicated, the automatic mode is good too, although it’s likely to be slightly slower over a race distance. It will give you full power if the game detects you are in a battle, or will perhaps save it for a particular part of the lap such as the long backstraight in China.

This is Liberty’s F1 game… 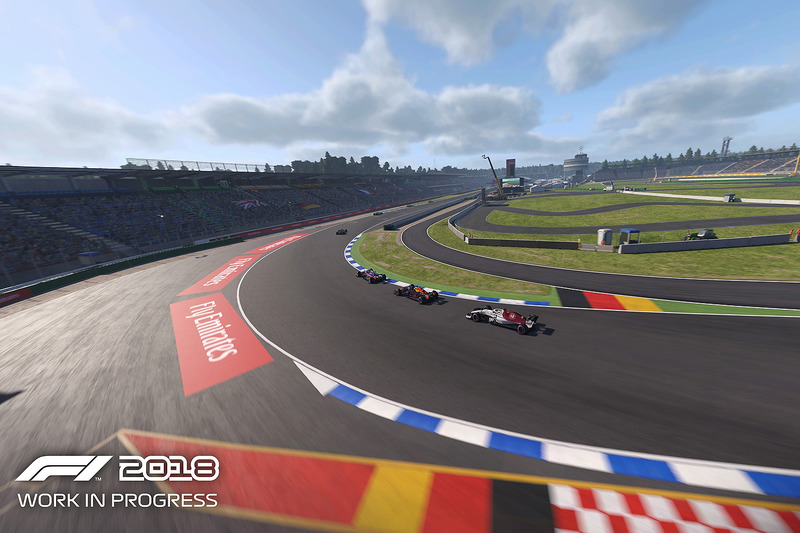 Fire up F1 2018 and you get fittingly dramatic opening credits highlighted by wheel-to-wheel action and the love-it-or-loathe-it theme song. It’s a prominent reminder that Liberty is now the one holding the strings of F1 in the real world and the virtual.

Those touches are the gloss on a fantastic broadcast feel. The first Bahrain Grand Prix in a career mode was stunning for going three-wide at Turn 1, sparks flying, before the customary firework show lit up the screen when Kimi Raikkonen won the race.

All minor points, but they further blur the lines between virtual and reality.

...but it still needs to release the shackles 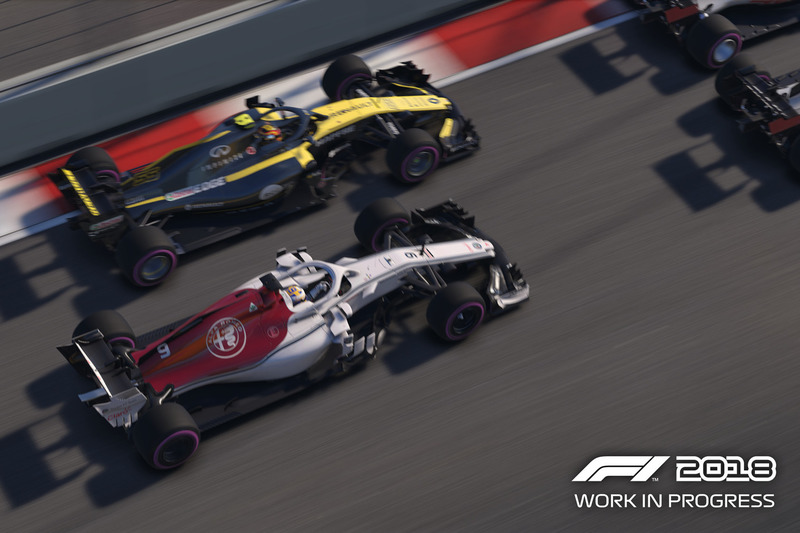 Codemasters does a fantastic job of working within the restrictive contractual nature of F1, which still has its roots in the over-protective Bernie Ecclestone era.

The recent evolution of the career mode since the introduction of the development war in 2016 has helped keep the 10-season career mode more varied, while classic cars and varied race formats in the ‘championship’ game mode (including a Formula 2-style double-header weekend and reverse-grid races) show that Codemasters is exploiting any areas where it is allowed a bit of freedom.

But the game is still pushing against a glass ceiling while major features such as driver swaps between teams, or the ability for players to create their own teams in the career mode, remain blocked by F1 or its participants.

There’s hope on the horizon given Liberty’s understanding of the importance of gaming for fan engagement, and the new official F1 mobile game includes a create-a-team feature, so that could be a first step towards the full-blown game getting some fantastic new features in the future.

Will online be fixed? 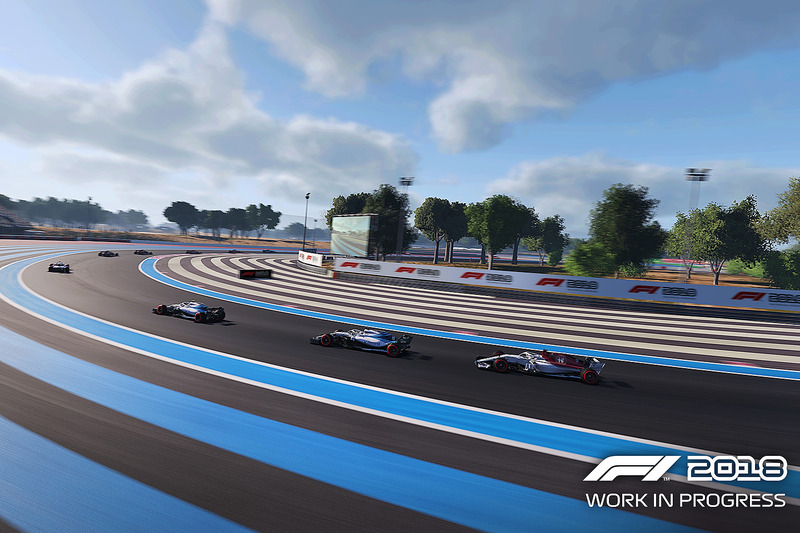 Ahead of the game’s release, this is one of the burning questions F1 2018 has yet to answer. Last year started virtually unplayable with a series of silly glitches and foibles, plus the behaviour of some who went online purely to disrupt.

The concept of a super licence to match similar players is an excellent first step – and Codemasters has promised greater resources have helped improve the online experience.

Considering the popularity and importance of F1’s Esports series, this is an area Codemasters has to own and noises from those who have already experienced it in a beta have made promising sounds.

Perez expects "business as usual" for Force India at Spa