Alonso and Massa took part in the official unveiling of the new installation, “Structuration F1 Ferrari”.

Maranello, 15 December – Today, two now well established symbols of Ferrari in Maranello were centre stage. This morning, on came the lights on the Christmas tree that for some years now has been donated to Ferrari by the city of Brunico.

The fir tree, which is almost twenty metres tall and is lit with over ten thousand low energy light bulbs is planted outside the front of the company restaurant. 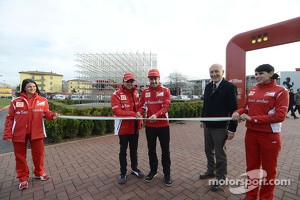 Flicking the switch was a delegation from Brunico, led by the Mayor, Christian Tschurtschenthaler and the vice-president of the province of Bolzano Hans Berger, along with President Luca di Montezemolo, Vice President Piero Ferrari, Managing Director Amedeo Felisa, Team Principal Stefano Domenicali and the drivers, Fernando Alonso and Felipe Massa.

Afterwards, Fernando and Felipe took part in the official unveiling of the new installation, “Structuration F1 Ferrari,” a sculpture by the French artist Jean-Yves Lechevallier, originally located alongside the historic management apartment building inside the Ferrari facility.

The sculpture, made from a real F1 car, is set up in a dynamic pose within a chromed metal tubular structure and is now to be found in front of the Ferrari Museum: one more reason to visit one of the most visited industrial museums in the world and home to significant exhibitions, like the one currently taking place, dedicated to the Great Ferraris of Sergio Pininfarina.

Christmas with the Ferrari family