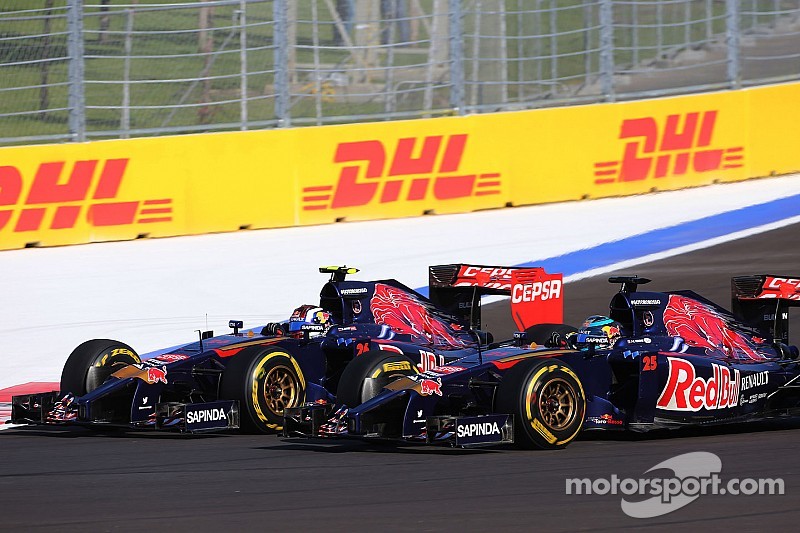 Franz Tost: "Now we have to analyse why it was possible that, with the same amount of fuel for everybody, we were so far behind."

Eric Vergne (Position: 13th): “It was an extremely frustrating race. We have to understand why we had to save so much fuel. It’s a real shame because the guys did an excellent job giving us a very good car, which I felt was great for the whole race. The start was very positive, we were attacking as much as possible but then I had to stop doing it, even though I felt I could really do a great job. We have to move on to the next race in Austin, where hopefully we will be able to extract the maximum out of the car.”

Daniil Kvyat (Position: 14th): “It was a tough race. Apart from the fact that I could not find immediately the right grip, we had to care too much about our fuel consumption compared to the others. This is something that we will have to understand, so as not to lose performance for this reason in the future. Last but not least, I also had to pit again towards the end of the race, losing even more positions. I would have liked to do much better here in Russia, in front of my own crowd, which really made me feel their great support. Regardless of the disappointing final result, it was great to race in such an amazing structure, with an excellent organization.”

Franz Tost (Team Principal): “First of all thanks very much to Mr. Putin and Bernie Ecclestone for putting on a Grand Prix here in Russia. It was a really fantastic event, in a very beautiful setting. As for our race, starting from P5 and P9 to see the chequered flag in 13th and 14th position is far from what we were expecting today. After around twenty laps, we had to start saving fuel, so we could no longer use our real potential today. We lost places just because several other cars could easily overtake us, therefore the final result is actually quite disappointing. Now we have to analyse why it was possible that, with the same amount of fuel for everybody, we were so far behind. We need to find a solution and prevent this from happening again.”

Ricardo Penteado (Renault Sport F1 track support leader): “It’s true that we were hoping for a lot more after our performance in qualifying, but that’s the way it goes sometimes. The Power Units have run well with no reliability issues all weekend, but both drivers spent a lot of the race having to lift and coast in order to manage their fuel consumption, compromising the result. Overall though I think we’ve again shown that the car is getting faster race-by-race.”