A Jordan F1 show car for sale in Québec 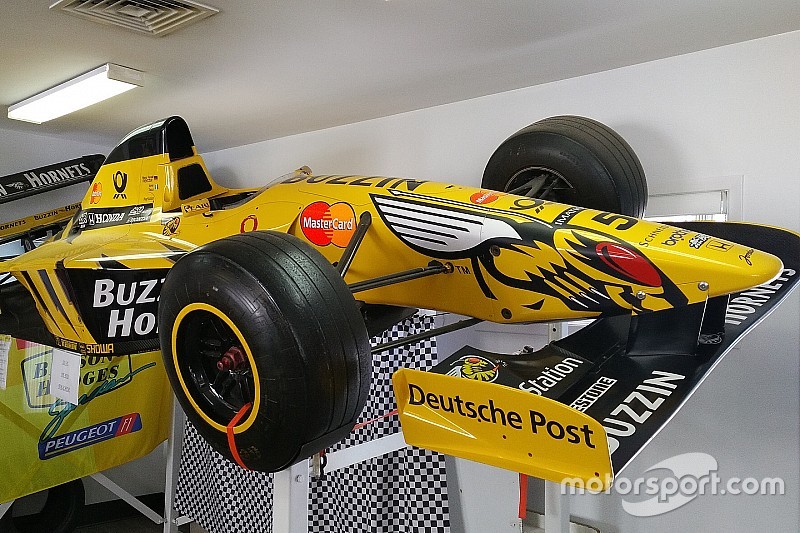 A genuine former Formula 1 car is up for sale in Québec and it has been listed on the Racecarsdirect web site in Europe.

The car is a Jordan 195, which contested the 1995 Formula 1 World Championship. It’s chassis No. 06 that was built in September and raced at the end of the season.

This Jordan 195, designed by Gary Anderson and Tim Holloway, is now being sold without the original Peugeot A10 V10 engine, but it’s complete with original gearbox, wheels, radiators and suspension.

It’s not in its original paint scheme, because it has been repainted like the Jordan EJ10 of the 2000 season with the infamous ‘Buzzin Bee’ on the nose cone (as shown on the main photo).

“We just sold the karting track and we have to get rid of everything,” Gosselin told Motorsport.com. “We are passionate people and we wanted to give an F1 look at our karting facility. Since we had some contacts at the Jordan team, we visited their factory in Silverstone and decided to buy this show car, which we got repainted in yellow by the team with all the original decals.

“Jordan had several cars for sale, I mean several, including the unique, and costly, Michael Schumacher’s 191 7Up car from 1991, but we decided to buy the 195. I fully agree that buying a Ferrari F1 car would have been more exotic let’s say, but far, far more expensive! We kept it for years here at the karting track, but now it’s up for sale. We’re asking €50,000 for it, so roughly $85,000 Canadian.”

For more information, see the ad by clicking here.