Felipe Massa finished eighth and Fernando Alonso failed to make the cut into Q3 and will start tomorrow’s race from eleventh on the grid.

Yas Marina, 2 November – Dusk in the desert did not prove propitious for Scuderia Ferrari. At the end of a busy session, Felipe Massa finished eighth and Fernando Alonso failed to make the cut into Q3 and will start tomorrow’s race from eleventh on the grid. 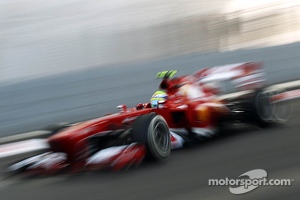 Q2 began with a run on the Softs from the previous session and in the last four minutes, everyone switched to new ones. At this point the F138s began to struggle more than expected. While Massa secured the tenth place in 1.40.989 to go through to the final shoot out, Alonso only just missed out, having to settle for eleventh in 1.41.093.

In the final part, Massa went out on track towards the end, doing just one run, using the final set of Softs available. The Brazilian was eighth fastest in 1.41.015. Pole went to Mark Webber in the Red Bull in a time of 1.39.957.

Fernando Alonso: “This qualifying has been as difficult as the rest of the weekend, even if in some races, starting eleventh on new tyres can help, so let’s hope that’s the case here. It is without a doubt better to make it through to Q3 but unfortunately I didn’t manage to get a very clean lap and I didn’t manage to make it by a few tenths.

This is one of the tracks where we suffer a bit more than usual, but in general our Sunday performance is better and so, again this time, our approach to the race is positive. We must absolutely get a good start, stay focussed and run a perfect race if we want to take points towards our aim of finishing second in the Constructors’, because it will be a tough fight.

We have seen that in the heat, the Softs work better than the Mediums and so logic dictates we should start on the softer tyre while it’s still daytime and switch to Mediums when darkness falls. Clearly, we have to see how things go”.

Felipe Massa: “I am pleased with my qualifying and things went better than I’d expected. All weekend, we haven’t been competitive enough and after this morning’s free practice, I was worried I wouldn’t make it to Q3, but then, thanks to a lap where I got the maximum out of the car, combined with the drop in temperature, I managed to make up a few places.

Today I did all I could and I think that without a bit of oversteer at the final corner, I could have done even better. This track does not suit our car, as you need good traction and the high temperature doesn’t help either, but the race is run in the evening and I hope that will allow us to bring home those important points we need right now, even if it’s definitely not going to be easy”.

Pat Fry: “Right from the start of the weekend, we have struggled to be competitive at this track and the outcome of qualifying reflects the hierarchy through the field that we have seen since the start. Even though we worked a lot on improving the balance of both cars, we continued to suffer from a lack of grip, especially in the third sector where our rivals make the difference.

In the first two sectors, we do not have any particular difficulties and we can maintain split times that are not far off those of the best, but in the final sector the gap gets bigger which has badly effected the overall lap time. When the temperature dropped, we managed to make the tyres work better, which meant the car was more reactive, even if it was not enough to allow our drivers to secure better positions.

Tomorrow, we will face a very difficult race, in which it will be vital to avoid traffic in the first stint as much as possible and so we are banking on a clean start. We will have to do everything perfectly if we want to help our drivers in their quest to bring home as many points as possible”.