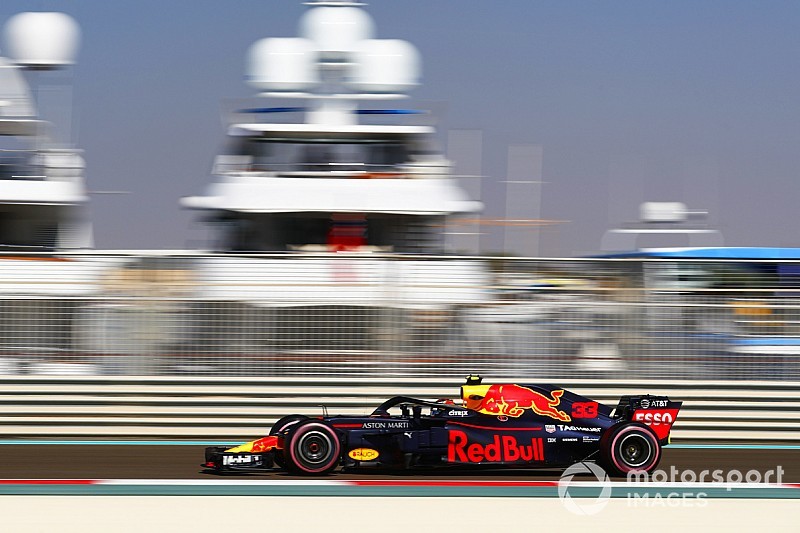 Verstappen enjoyed a comfortable advantage over teammate Daniel Ricciardo to top the FP1 times by almost half a second.

The Dutchman burst clear in the second half of the session on a 1m38.491s that left him 0.454s clear of Ricciardo, while Mercedes' Valtteri Bottas was the only other driver to lap within a second of Verstappen.

Red Bull's one-two was earned as the team completed two sets of fresh hypersoft runs, while Mercedes and Ferrari switched from the softest-available compound to the hardest for the second half of the session.

Hamilton made a modest improvement on ultrasofts, having led the running early on using hypersofts.

While the Mercedes drivers were able to make gains on the hardest of the three Pirelli compounds in Abu Dhabi, Ferrari did not improve.

That allowed Esteban Ocon to steal into fifth place for Racing Point Force India and Kevin Magnussen to take sixth for Haas.

Ocon was 1.6s off the pace, just over a tenth quicker than Magnussen, with Kimi Raikkonen and Sebastian Vettel relegated to seventh and eighth.

Their early hypersoft efforts stood as their best times despite completing laps on supersofts that were not part of a long run.

Renault's Carlos Sainz and the second Haas of Romain Grosjean completed the top 10.

The 90-minute session passed with minimal drama, although Marcus Ericsson caused yellow flags with a half-spin his Sauber exiting Turn 1 early on and slid nose-first into the inside barrier.

Newly-confirmed 2019 Williams race driver and F1 returnee Robert Kubica completed the 20 runners, standing in for the driver he will replace full-time next year Sergey Sirotkin.

Kubica lapped 4.5s off the pace, 1.5s slower than Lance Stroll, but had already made clear on Thursday he would not be pursuing lap times in FP1 and would instead complete evaluation work for next season.