Alain Prost back in his Renault F1 Turbo from 1983

Four-time Formula One World Champion Alain Prost got the chance to get back behind the wheel of his Renault RE40, which he raced in 1983.

The ninth Grand Prix Historique de Monaco saw Renault ambassador Alain Prost get behind the wheel of the Renault F1 Turbo (RE40) he raced in the Formula 1 World Championship in 1983 when he claimed four victories and second place in the end-of-year Drivers’ standings.

Last weekend, Alain Prost completed a series of parade laps in the Renault Classic-prepared car in which he came close to securing his first F1 world crown in 1983. That season, he started the Monaco GP in his Renault single-seater from pole position. This time, with four supreme titles to his name, the Frenchman entertained the crowds that lined the streets of the Principality with the bark of his car’s 750hp Renault V6 Turbo engine. 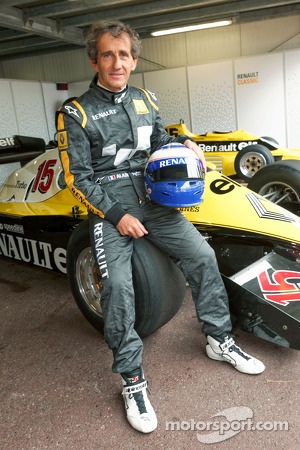 Also present was another key player in Renault’s F1 history, namely Jean-Pierre Jabouille who was the first driver of the marque’s famous Turbo era in 1977. He was also the man behind Renault’s first F1 success in 1979. His car for the Grand Prix Historique de Monaco was the Renault F1 Turbo RS 01 which he drove in 1977 and 1978.

The two French aces breathed life into two of Renault’s landmark single-seater racing cars which revolutionised modern Formula 1 history thanks to their turbo technology which has now returned as a feature of motor racing’s premier competition.

The breeding that went into the turbocharging technology developed by Renault for F1 in the 1970s and 1980s can be found today in the DNA of the Renault Energy range of engines which benefit from the brand’s unique expertise in the realms of downsizing, reliability and energy efficiency. The new 2014 Renault Energy F1 Power Unit serves as a valuable means to test and fine-tune technologies of the future which, in a few years’ time, will enhance the performance, fuel consumption and CO2 emissions of the brand’s forthcoming production powerplants.