Albon not to blame for FP1 crash, says Horner 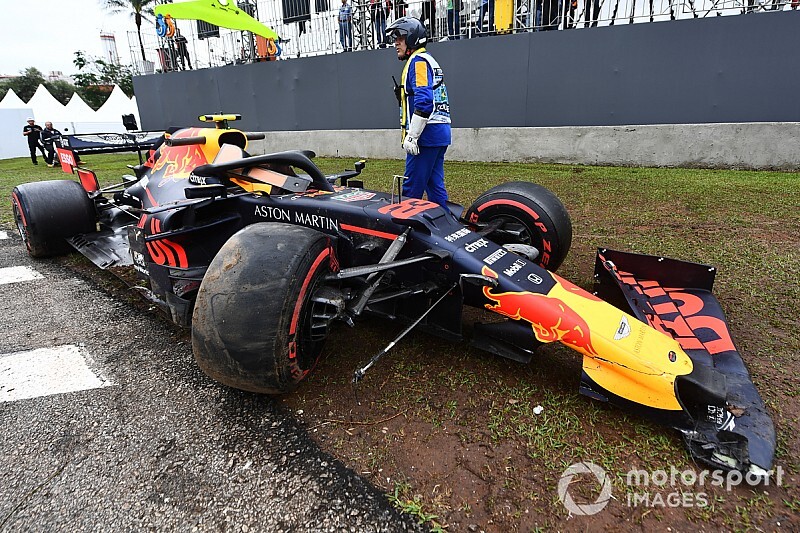 Red Bull Formula 1 boss Christian Horner says Alex Albon should not be blamed for crashing on a damp track in opening practice for the Brazilian Grand Prix.

Albon topped FP1 at Interlagos after setting the quickest time on intermediates but shunted at the penultimate corner as he prepared for a flying lap on slick tyres while conditions were still tricky.

Though Horner joked it was "quite an expensive session" for Red Bull, he pointed out that Albon was not alone in making an error – as his Red Bull teammate Max Verstappen had only just avoided crashing with his own off at the Senna Esses at the start of the lap.

"It started good, Alex, first time in Brazil, first time on the track, went fastest on the intermediates," said Horner. "And then the circuit looked like it was starting to get dry. I think there were 10 cars that went out on slicks.

"Max went off at Turn 2. Alex, unfortunately, with cold brakes, he locked up in the last turn and put a bit of damage. So it's dented the mechanics lunch break, to get the car ready for the next session."

Albon has been re-signed for Red Bull for 2020, when he will have a full season with the senior team after being promoted to replace Pierre Gasly midway through the current campaign.

He has had several practice crashes this year at Toro Rosso and Red Bull, but when asked by Motorsport.com if this was part of an unfortunate habit or just a result of the conditions, Horner said: "I think today you can't put on Alex's account.

"Maybe we were a little bit too optimistic getting out there trying to get him laps in on a track that was still pretty damp in the middle sector. And Max he had a moment at Turn 1 and Turn 2, there were other cars as well running wide. I don't think today's [accident], we can blame that on on Alex.

"He's had a few little incidents this year, thankfully they've all been on Fridays and Saturday mornings, and when it's come to it in qualifying and the race he's absolutely delivered."

Zandvoort banking will be twice as steep as Indy