When Canadian Allen Berg drove for Osella in Formula 1 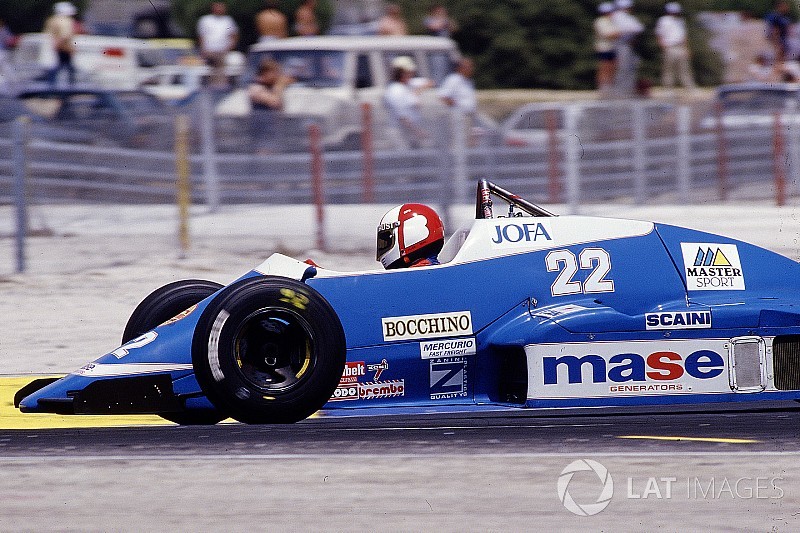 Canadian Allen Berg drove for the diminutive and underfinanced Osella Formula 1 team back in 1986. Motorsport.com recently sat with him to recall this challenging, yet exciting period of his career.

Born in Vancouver, British Columbia in 1961, Allen Berg raced successfully in karting, Formula Ford and Formula Atlantic before he competed against the likes of Ayrton Senna and Martin Brundle in the fiercely disputed British Formula 3 championship in 1983.

One year later, he ranked second in that same series and then started to look for a ride in Formula 1.

“I had tests with Arrows and Tyrrell, and I started to talk with John Wickham at Spirit and John MacDonald at RAM. The problem was to find sponsorship. It didn’t happen for me at that time,” Berg told Motorsport.com.

His luck turned when he crossed paths with Michel Koenig, a businessman who was the Editor of the famous “Grand Prix International” magazine.

“Michel [Koenig] helped me out when I raced in F3,” Berg added. "We kind of lost sight of each other, but we met by accident in the lobby of a hotel in Toronto. We talked about F1 and decided to join forces together for 1986”.

“I spent the weekend of the Canadian Grand Prix with the team in Montreal. Enzo Osella and I signed the deal Sunday night after the race on top of a fuel drum in the old garages, using a copy of Christian's [Danner] old contract and essentially filling my name over top of his. The contract required a first payment of just $25,000 Canadians! We did a seat fitting the Monday morning and I flew to Detroit for my first race.” Berg recalled.

Imagine this: Berg had to compete in his first Grand Prix on the daunting Detroit street course, not having tested the car beforehand and not knowing the track at all.

“There was no radio, no video to watch, no data acquisition, zero driver aids, no coaching, no driving simulators,” Berg said. “On top of that, Enzo Osella didn’t speak a word of English. They gave me an engineer and two mechanics who could speak some English. Before the first practice session, Ken Tyrrell came up to me and gave me this advice ‘Just keep it on the island…’ The Osella was a handful to drive with the immense power it had and the lack of technology. It was the slowest car on the grid. It was out-dated and powered by the Alfa Romeo turbocharged V8 engine that was down on power, especially in qualifying trim where it was down by 400 or 500 horsepower to the best motors.”

Driving this beast on any circuit was far from being easy.

“The engine was anaemic below 7,500/8,000 rpm, then the power came in at 8,500 when the two turbos spooled up, and at 9,000 rpm I had 900 horsepower under my right foot. The turbo lag was terrible. The throttle was almost an on-off switch! It was difficult to time it well for the power to come abruptly when the front wheel were pointing straight. Acceleration was unbelievable. The car had the ability to spin its rear wheels in fifth gear at 200 km/h on cold tires.

“The downforce and grip level were incredible. The car only weighted 1,200 pounds and had carbon brakes that were very difficult to get used to. Braking performance was mind boggling, with huge wings on the front and back. Just lifting off the throttle would equate to a full panic stop in a road car! I also had to manipulate an H pattern manual gearbox. These were big, heavy gearboxes that had to be robust to handle the kind of torque and power these engines were producing. Downshifting was a challenge because the deceleration force of the car was so huge and quick that it was hard to be able to manipulate the gearbox fast enough to keep up with the deceleration,” Berg told Motorsport.com.

With virtually no suspension in those days, these F1 cars were terribly physical to drive.

“I would lose up to eight to 10 pounds during a race and would typically finish the event with blisters on my hands and feet. I remember at the Austrian Grand Prix in the fast Bosch Kurve I had to shift from fourth to fifth gear in the middle of the turn, it took all of my strength to keep the wheel turned while I shifted gears,” Berg added.

As the season progressed, the lack of money became more and more critical.

“The team was really strapped for budget. It was competing by the skin of its teeth. We were running out of money, spare parts and engines. In Portugal, a brand new track for me, my teammate [Piercarlo Ghinzani] and I were limited to just six laps each in the first practice session before going into qualification. I seem to recall that we went to the final two races with two cars and one spare engine between the two of us. However, I want to give full credit to the team.

Enzo Osella and his wife were just amazing people, very dedicated individuals. I was just 24 and I had real trouble finding sponsorship money. There was very limited F1 coverage here [in Canada]. There was no Internet, no social networks… F1 was still relatively unknown, especially in Western Canada. I started to run behind in the payments that needed to be made to the team. In Monza, Mr. Osella put an Italian driver in my car. ‘I have to replace you because this driver has money. If you can pay what needs to be paid, we’ll run you until the end of the year’ Osella told me.”

Allen Berg managed to find some money to contest the last three races of the season.

“Labatt’s breweries, Financial Trust and a horde of small sponsors came in to pay the bills,” Berg said. “I raised $230,000 Canadian to contest a half a season in F1.” Berg took part in nine Grand Prix events that year, with a best result of a 12th place in Germany.

“Half a dozen teams showed interest in running me for 1987. Larrousse was one of them. Labatt’s were interested in extending their support. However, economy was bad at that time. And then the Canadian Grand Prix was cancelled, which ruined my chance to continue in F1,” said Berg who then pursued his career in the DTM, and moved to Mexico where he clinched the Formula 2 title in 1993 and Indy Lights Panamericana title in 2001.

Although his driving career came to an end, Berg stayed involved in motorsports. He worked with several racing teams as an instructor and created the Allen Berg Racing School in 2007. Today, his school is based at Laguna Seca, California and provides a race driving experience in open wheel racing cars for people with little to no experience as well as instructional programs for up-and-coming drivers to work their way into driving professionally.

Cosworth "unlikely" to return to F1 as independent supplier