Michael Schumacher and Kimi Raikkonen were not as tough as teammates as Alonso.

Since becoming the Maranello team's race driver in 2006, the Brazilian has been paired with champions Michael Schumacher as well as Kimi Raikkonen. 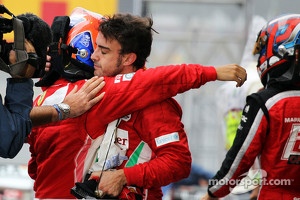 But, in the wake of his 2009 head injuries, Massa's toughest time has been alongside Spaniard Alonso, so much so that he was almost ousted by the Italian squad before his form resurgence late last season.

"Alonso has probably been the most difficult if you look at the figures," he told reporters at Madonna di Campiglio on Thursday.

"But all three drivers were very strong and that's the truth. But maybe Fernando has been the most difficult and the one I've suffered with the most.

"I hope not to suffer any more," added Massa.

According to Spain's Diario AS, he was asked by reporters if he thinks Alonso was the very best driver of 2012, even though Sebastian Vettel won the title.

"I think that given we did not have the best car in qualifying, even if things were better in the races, Fernando did a great championship," said Massa.

"He did really an excellent job and finished almost with the same points as Vettel with a faster car; especially in the last six or seven races it (the Red Bull) was much faster.

"But Vettel was also strong last year. Both did a perfect championship," he added.