Formula 1 returns to Paul Ricard for the French Grand Prix this weekend after a topsy-turvy podium last time out in Baku. But 31 years ago, it was the Le Castellet track that almost produced one of the greatest F1 shocks courtesy of Ivan Capelli, as he regaled to Autosport for the 1990-themed 13 August 2015 issue.

"You are looking at an astonishing situation," cried legendary commentator Murray Walker - and he wasn't exaggerating. Ivan Capelli was holding off Alain Prost's Ferrari and was just a few laps away from winning the 1990 French Grand Prix for Leyton House, a team that had failed to qualify on half of its attempts in the season's previous six races. Impossible, surely...

Things could scarcely have been less promising for the Leyton House-Judd team heading to France. Young technical director Adrian Newey had left the team ("it was clear it was going down, he said of its declining financial situation), while team principal and ex-Autosport editor Ian Phillips was recovering from life-threatening meningitis. And in the previous race in Mexico, neither Capelli nor Mauricio Gugelmin had qualified.

"We had problems producing downforce," says Capelli, who is still an F1 paddock regular through his Italian television work. "Then, before the French GP we modified the central tunnel of the diffuser at the back. This, and the fact that the circuit was flat with no bumps, meant we could run the car very low and finally produced the downforce we had from the windtunnel data."

Newey, who watched what was so nearly the first F1 victory for one of his cars from home, blames windtunnel problems for the team's failure to kick on from a spectacular 1988 season (then still running under the March name).

"It wasn't until the first part of 1990 that we started looking at the windtunnel itself," says Newey of that period. "We realised that the moving ground had actually bowed over a period of time and was giving us completely false aerodynamic readings. That led to the new underbody for Paul Ricard, which transformed the car."

While the car was dramatically improved, there were no indications that it might be able to fight for victory. Capelli qualified seventh, a second off the pace, with Gugelmin 10th. But Gustav Brunner, later appointed Newey's successor as technical director, had a plan that put the team in contention. 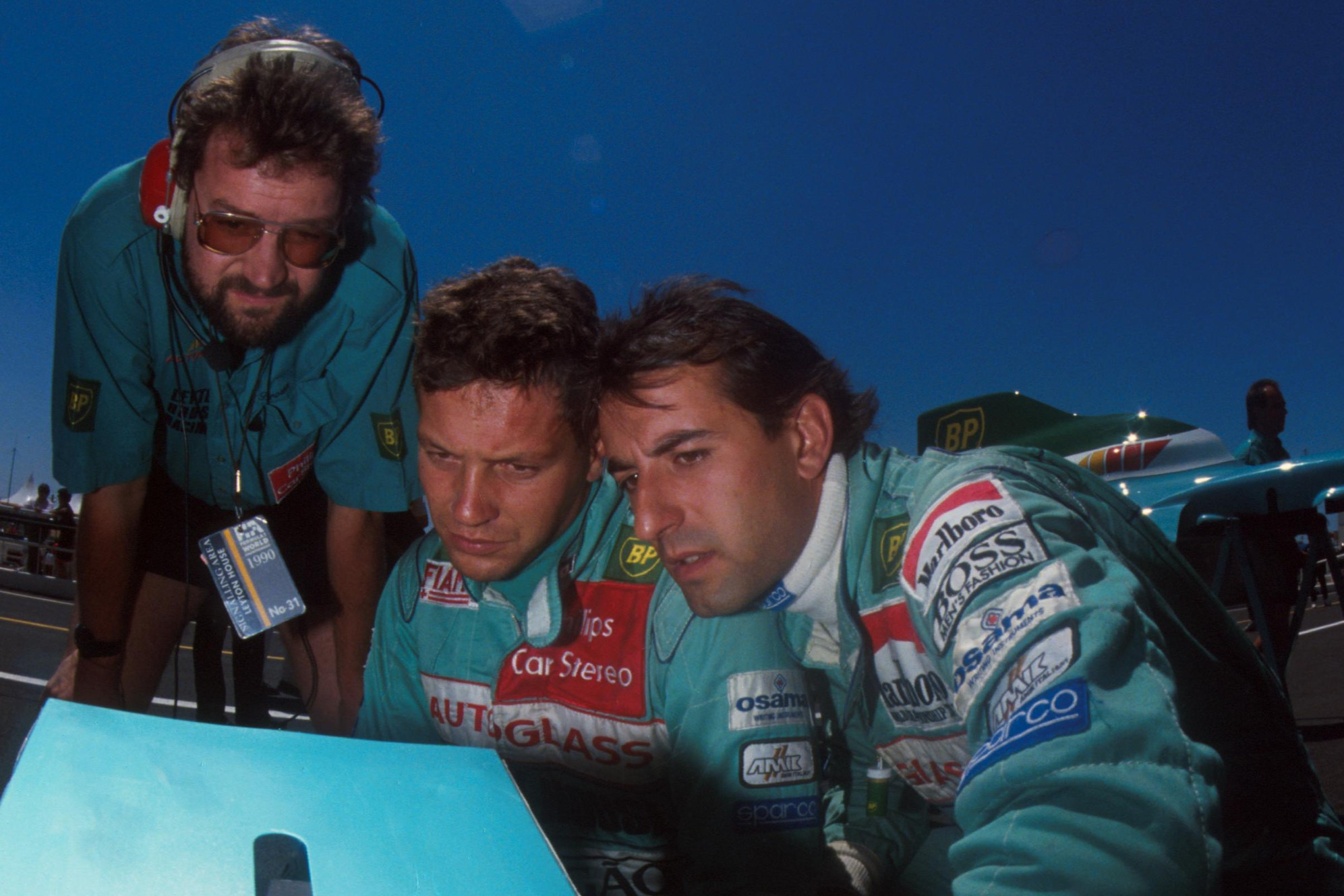 "Paul Ricard was very abrasive and all of the teams planned to change tyres," explains Capelli. "We created a set-up to use the same set throughout. We also made a little modification to the front wing before the start, increasing the downforce on one side because we wanted to take the fast Signes corner only having to lift a little to help protect the tyres."

Both drivers started the race on a set of the C-compound Goodyears (the same as Ferrari drivers Prost and Nigel Mansell, with the McLarens of Ayrton Senna and Gerhard Berger on the harder Bs), and as the others stopped they gradually moved to the front.

Capelli, who had survived a clash with Jean Alesi's Tyrrell that left both with pronounced tyre marks on their sidepods, took the lead at the end of lap 33 with Gugelmin in second. Prost was only 10 seconds behind and, with 47 laps to go, it seemed inevitable that he would reclaim the lead.

"I was very happy to finish the race. But then just after the flag I realised I had lost the chance to win. It was the only chance in my career to win a race" Ivan Capelli

But it wasn't until lap 54 that Prost got ahead of Gugelmin, who retired four laps later. He was, by then, just five seconds behind Capelli. With 20 laps to go, he was within half a second of Capelli - and there he stayed.

"I saw Maurice's car stopped with smoke coming from the engine, so I was watching the temperatures closely but everything was fine," says Capelli. "I was just fighting against Prost. He caught me, but he was not able to overtake me.

"We had mirrors mounted on the sidepods, designed by Newey the year before. In the middle of the race, on the right side, the mirror inside the housing fell out. So I couldn't see Prost if he was on the right, but I could always check on the left. When we arrived for the right-hander at the end of the pit straight, I had no idea if he was there or not so I just had to turn in very sharply. Alain thought I was being very aggressive, but I couldn't see!"

With less than three laps to go, Capelli had all but won. Yes, Prost was still there, but the Italian had done the hard work. Then the fuel pressure dropped. 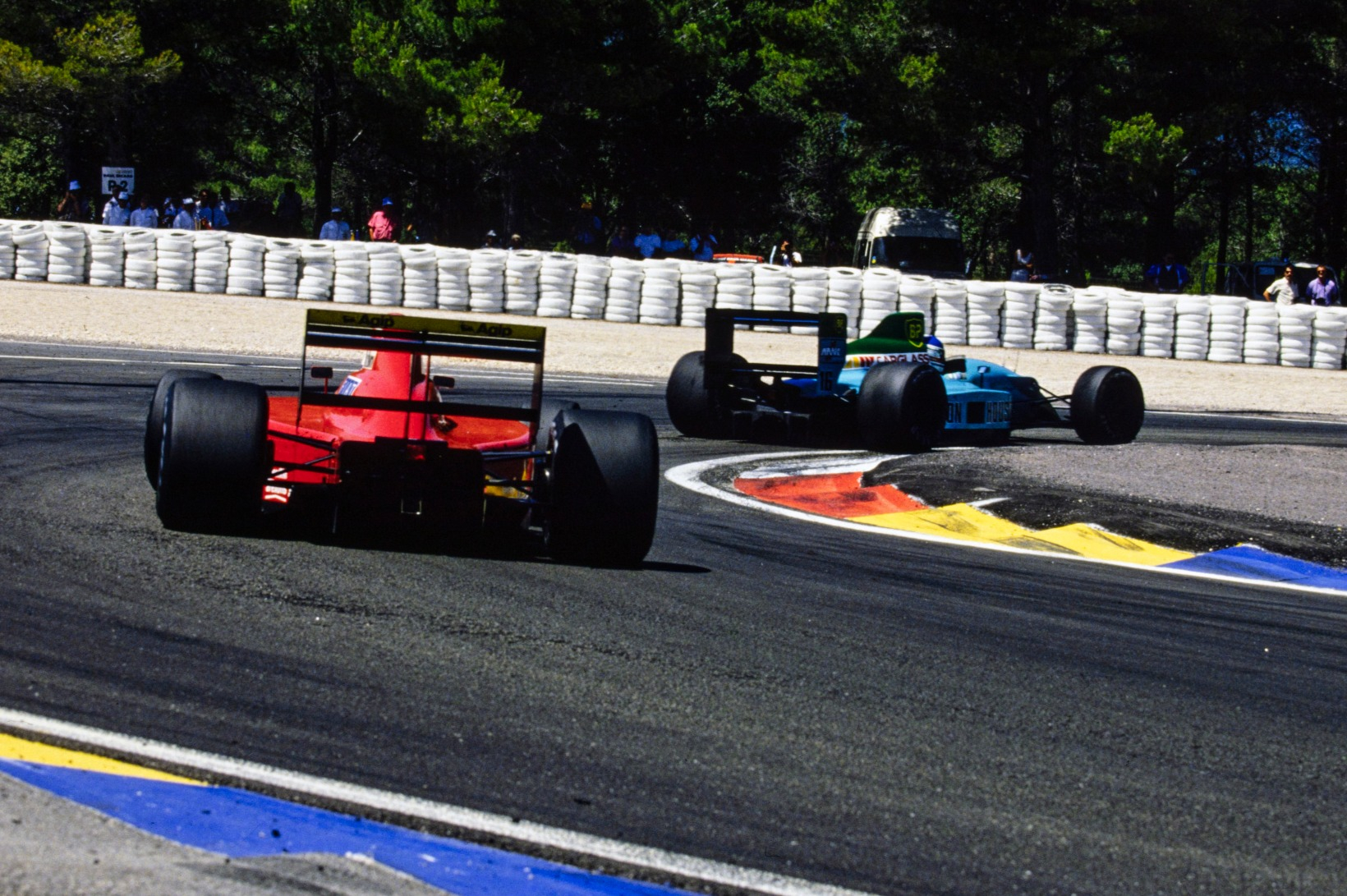 "As I approached Signes, the oil light flashed, and I realised I had a problem. I had to back off immediately to ensure the engine didn't stop. Obviously, Prost was able to pass me but I kept going with the engine not running cleanly. Approaching the chequered flag, Ayrton almost overtook me."

The gap was officially three seconds. Had the line been a little further away, Capelli would have lost second. But he was still happy with the result.

"On the one side, I was unlucky because I didn't win," he says. "But on the other side, I was lucky because at least I was still second between the two great champions - Prost and Senna. I was very happy to finish the race. But then just after the flag I realised I had lost the chance to win. It was the only chance in my career to win a race."

Capelli did run in the top three at Silverstone, but there were no more points finishes that year. Today, he's best remembered as having failed to complete his only season - 1992 - as a Ferrari driver, a victim of one of the worst cars the Scuderia ever produced.

As for Leyton House, it was already on the slide financially and it lasted only until the end of the 1992 season. 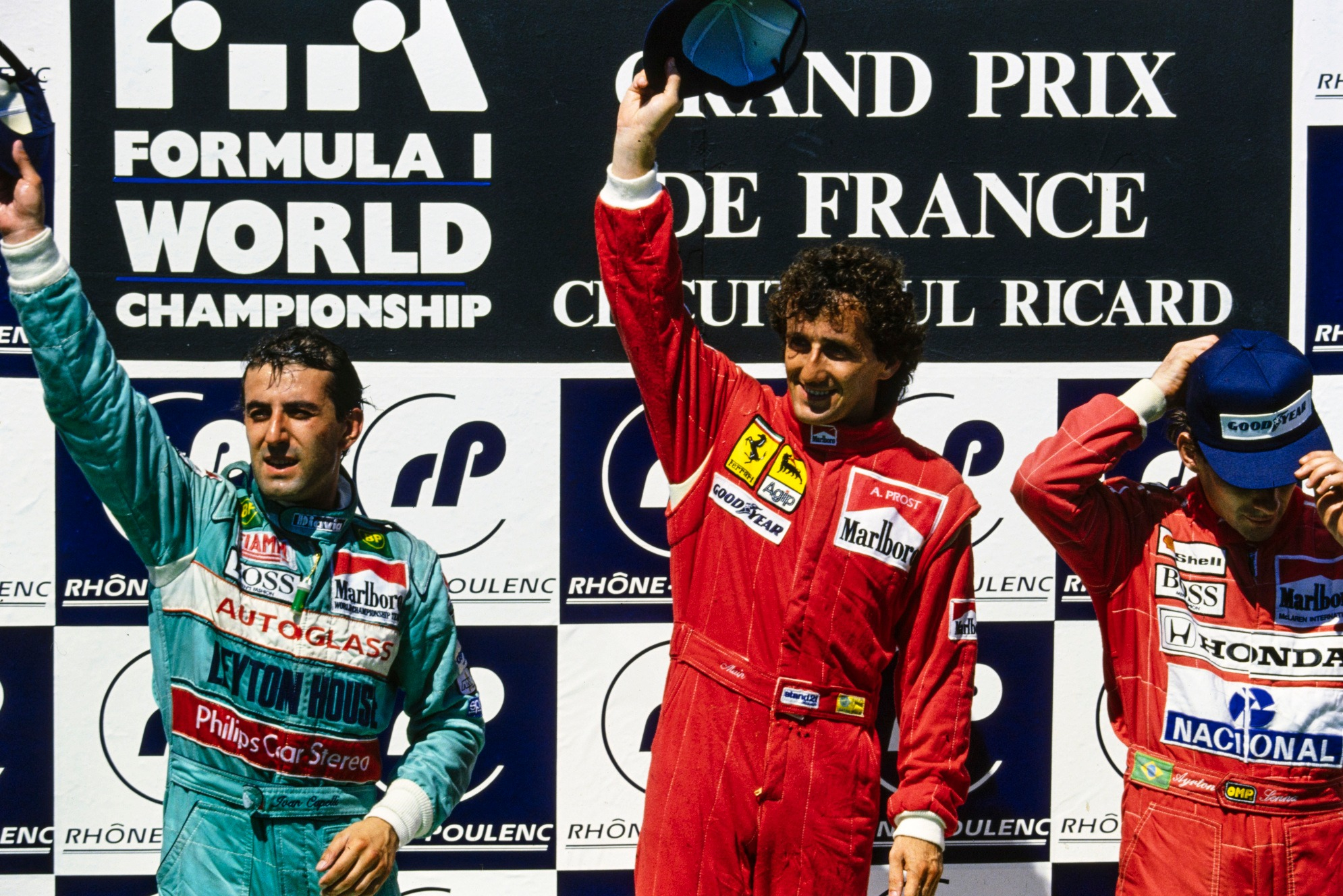 Capelli celebrates on the podium with Prost and Senna