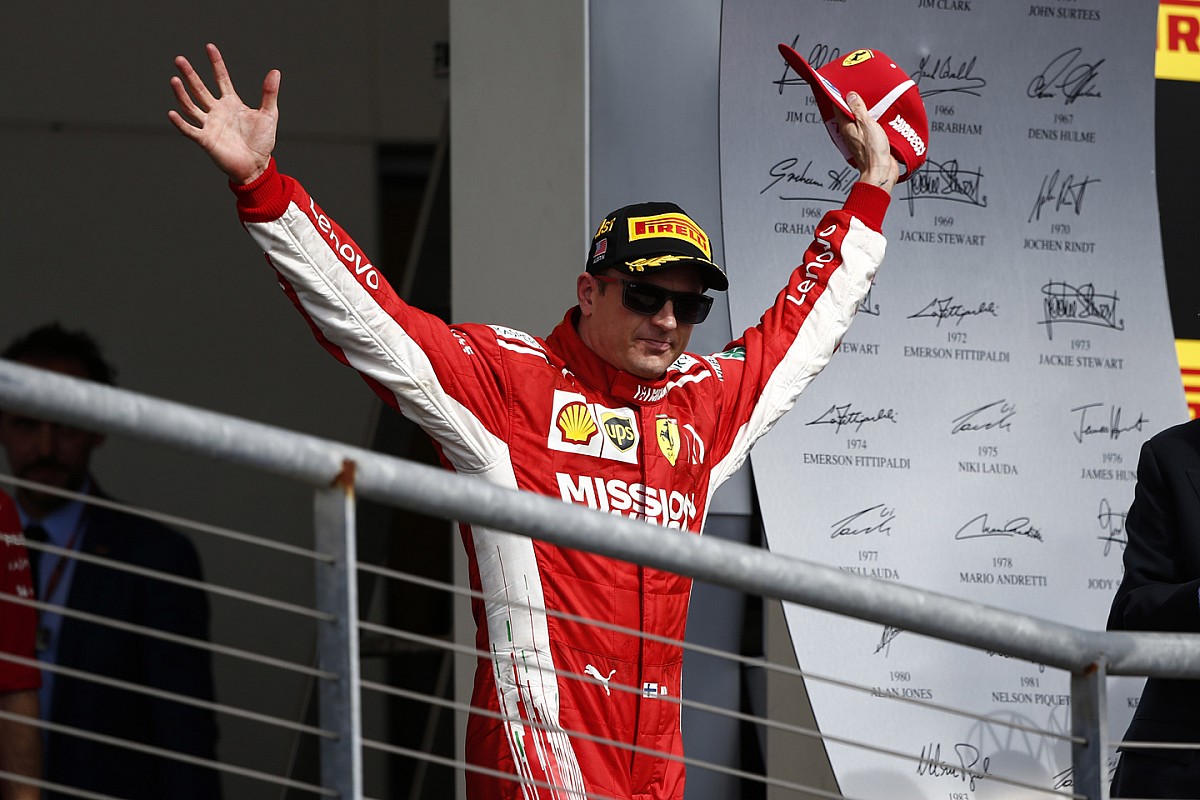 What is likely to be Kimi Raikkonen's final Formula 1 victory at the 2018 US Grand Prix is being live-streamed by F1 today. The high point of a disappointing second spell at Ferrari, it nonetheless gave the 2007 world champion a chance to prove a point.

When Kimi Raikkonen crossed the line to win the 2018 United States Grand Prix, even the Finn couldn't help but note how long the wait had been. Raikkonen thanked his Ferrari team before quipping: "F**king finally..."

No less than 113 races after his 20th Formula 1 victory at the 2013 season-opening Australian GP, the man who remains Ferrari's most recent world champion in 2007 was at last a race winner again.

Even if it came too late to save the his seat with Ferrari, it was a stark reminder to the F1 world that, just a couple of weeks after his 39th birthday, he still had what it took to fight with the very best.

Raikkonen's second spell with Ferrari had been a largely difficult one. Effectively forced into a paid sabbatical in 2010 to make way for Fernando Alonso, Raikkonen had taken a two year break before shining on his return to F1 with the cash-strapped Lotus team, prompting a surprise return to Ferrari alongside Alonso.

But as Ferrari struggled in the early part of the V6 hybrid era, Raikkonen was unable to rekindle any of the impressive form seen in his first three-year stint with the Scuderia from 2007 to 2009. He slumped to 12th in the 2014 standings, and while he improved upon Sebastian Vettel's arrival at the team the following season, he managed only seven podiums across his first three years of his second stint.

Nevertheless, he continued to get one-year contract extensions despite the recurring questions about his motivation that had been present throughout his F1 career.

Raikkonen's form began to lift when the new regulations increasing the level of downforce came into force for 2017, most notably at Monaco, where he took his first pole position since the 2008 French GP. But a slow couple of laps in traffic after his one and only pit stop allowed championship-challenging Vettel to get the overcut, much to Raikkonen's chagrin. He cut a perturbed figure on the podium afterwards, feeling he had been denied his first win with the team since 2009 at the Belgian GP.

Raikkonen continued to rack up podiums, scoring eight in the opening 12 races of 2018, but continued to miss out on victories. Another opportunity came and went at Monza, where he had taken pole after getting a tow from Vettel, who then spun early on. Raikkonen led the majority of the race, only for Valtteri Bottas to run a long first stint so he could back Raikkonen into the clutches of Mercedes team-mate Lewis Hamilton. The tactic worked, allowing Hamilton to pass with 10 laps to go and win the race.

Ferrari had informed Raikkonen on the eve of the Monza race weekend he would not be retained for 2019, taking the decision to promote Charles Leclerc from Alfa Romeo into the team alongside Vettel. But there was still a final chance for Raikkonen to roll back the years and end his Ferrari spell on a high. 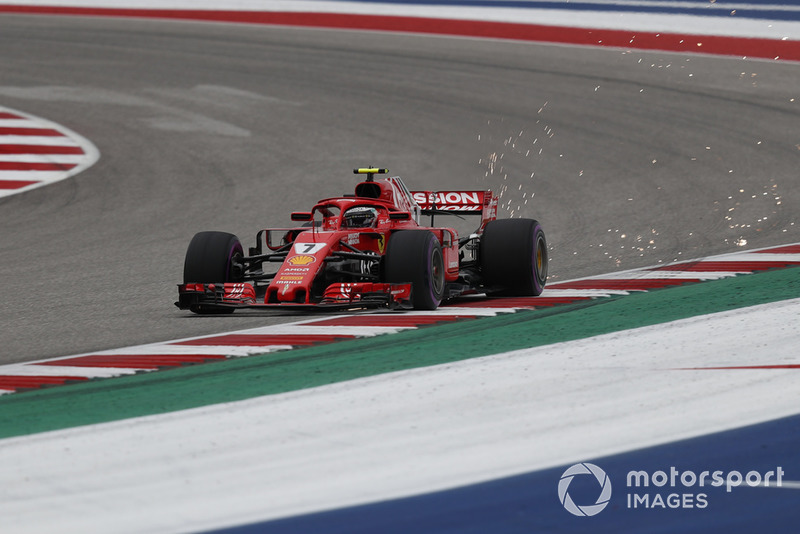 Vettel's title bid had unravelled in the second half of 2018, with the final blow being dealt at the Circuit of The Americas. After picking up a three-place grid penalty for speeding under a red flag in practice, Vettel started fifth, before a clash with Daniel Ricciardo's Red Bull on the opening lap sent him into a spin that dropped him to the rear of the field.

That left Raikkonen to fight alone - just as he had at Monza - for Ferrari at the front. From second on the grid, he had made a great start to muscle past pole-sitter Hamilton on the uphill run to Turn 1 and kept the Mercedes at bay through the opening stages.

Hamilton sat just 1.5 seconds shy of Raikkonen when electrical problems brought Ricciardo's day to an early end on lap 11 and prompted the Virtual Safety Car. Mercedes rolled the dice and switched Hamilton onto a two-stop strategy while the field was slowed, but Ferrari stuck to its plan to pit just once and kept Raikkonen out.

The decision initially seemed like a masterstroke from Mercedes. Hamilton emerged just eight seconds behind Raikkonen on fresher tyres, and quickly closed up on the leader after being waved past team-mate Bottas. But Raikkonen was staunch in his defence, fending Hamilton off for three laps before eventually diving in to the pits.

Delaying Hamilton while he had a tyre advantage would prove crucial in Raikkonen's victory bid. Although he was leading after the Ferrari's stop, Hamilton's lap times began to take a dip, while Raikkonen - armed with fresher rubber - carved into the open road ahead and whittled the gap down.

By the time Hamilton came in for a second time, Raikkonen had reduced the gap to just seven seconds, leaving the world champion-in-waiting with a huge gap to make up.

Complicating matters further for Hamilton was the sole remaining Red Bull of Max Verstappen, who had also used a one-stop strategy to get ahead and was lurking in Raikkonen's mirrors just a couple of seconds behind.

But Verstappen's pressure on Raikkonen was eased with seven laps to go as Hamilton closed in, creating a potential three-way fight for the victory. If Hamilton passed both cars, his fifth world title would be confirmed.

Alas, Verstappen refused to back down, eager to make up for the penalty that had controversially robbed him of a podium in Austin 12 months earlier. He remained in second, even as Hamilton tried a move around the outside of the sweeping right-hand complex of corners in the final sector on the last lap. 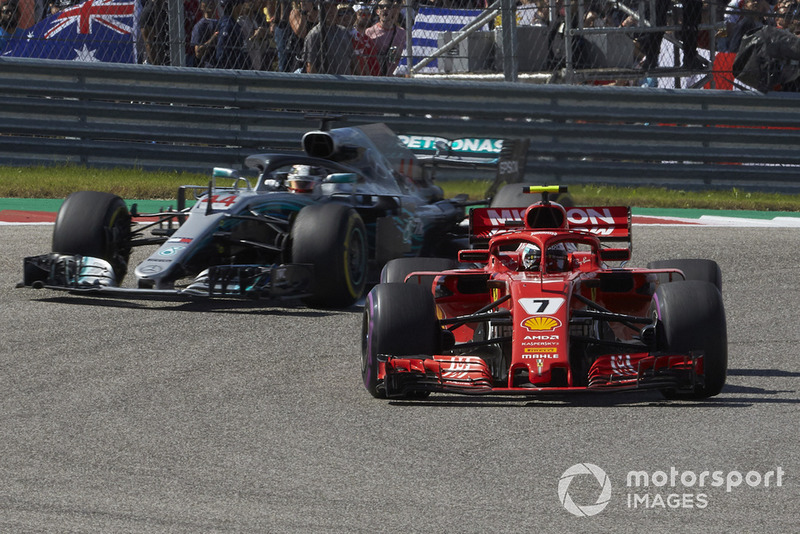 The battle for second meant that Raikkonen could at last revel in the glory of another grand prix victory. Responding to his engineer's congratulatory messages, he replied, "Yeah, thank you. F**king finally."

True to form, there was little show of emotion on the rostrum as Raikkonen kept his sunglasses on for everything bar the mandatory photo. He was, naturally, the first to start swigging his champagne before either Verstappen or Hamilton had even picked up their bottles.

After the race, Raikkonen's victory drought was a natural topic for debate. While he said it "hadn't really been a big deal", he was pleased to have changed perceptions of his second Ferrari spell.

"It's been a much bigger deal for other people," he said. "If it comes it comes, if it doesn't it doesn't change my life one bit.

"I'm happy because we are here purely to try to win. The biggest difference is how people look at you. Obviously, I'm happy. [I] just proved some people wrong."

It would be the final victory for Ferrari in 2018 as Raikkonen ended his spell at Maranello in style. He outscored Vettel by 108 points to 104 in the final eight races of the season, doing enough to pip Verstappen to third in the standings.

It was his best championship finish since 2012, and famously led to his drunken appearance at the FIA gala, an event he had actively tried to avoid attending in the past.

Now 40 and settled in the midfield with Alfa Romeo, Raikkonen is unlikely to make a return to the top step of the podium before his time in F1 is up.

But that makes his COTA win all the more special, giving a driver who has beaten Alonso, Hamilton and Michael Schumacher in their primes the final hurrah that many F1 greats are so often denied. 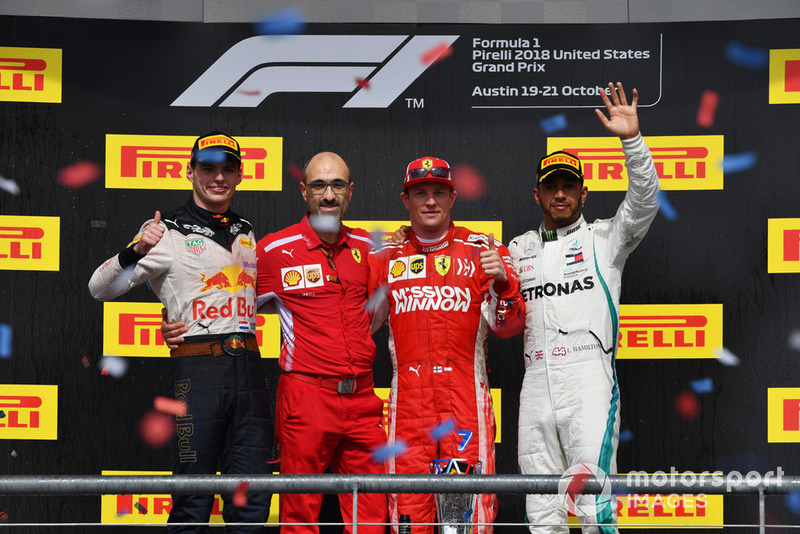