Ayrton Senna’s Pacific Grand Prix in 1994 was one of the shortest of his illustrious career, the great Brazilian getting punted out of the race at the first corner by Mika Hakkinen. But what happened next only heightened his suspicions that rival team Benetton was using some form of illegal traction or launch control on its car.

Senna took pole position – the 64th of his career – thanks to his time in Friday qualifying. This was fortunate for two reasons: on Saturday, the track was much slower and he’d spun at Revolver corner, leaving him 24th fastest in that session. Teammate Damon Hill also spun at the same corner on his second run, and although he topped the session his quickest time on his first run was way off what he’d achieved on Friday.

Senna said at the time: “When I was on my first run the car felt fine, the engine, everything worked okay, it was a reasonable lap, the grip was good, but I really don't know what happened to be honest. It is odd it happened the same for both of us, and I really don't understand because the car was nice.

“I had a good direction into the corner, with one of the best positions I have had at that corner throughout the weekend, so it should have been no trouble at all. It was disappointing and frustrating, but it was better to happen today and not tomorrow!” 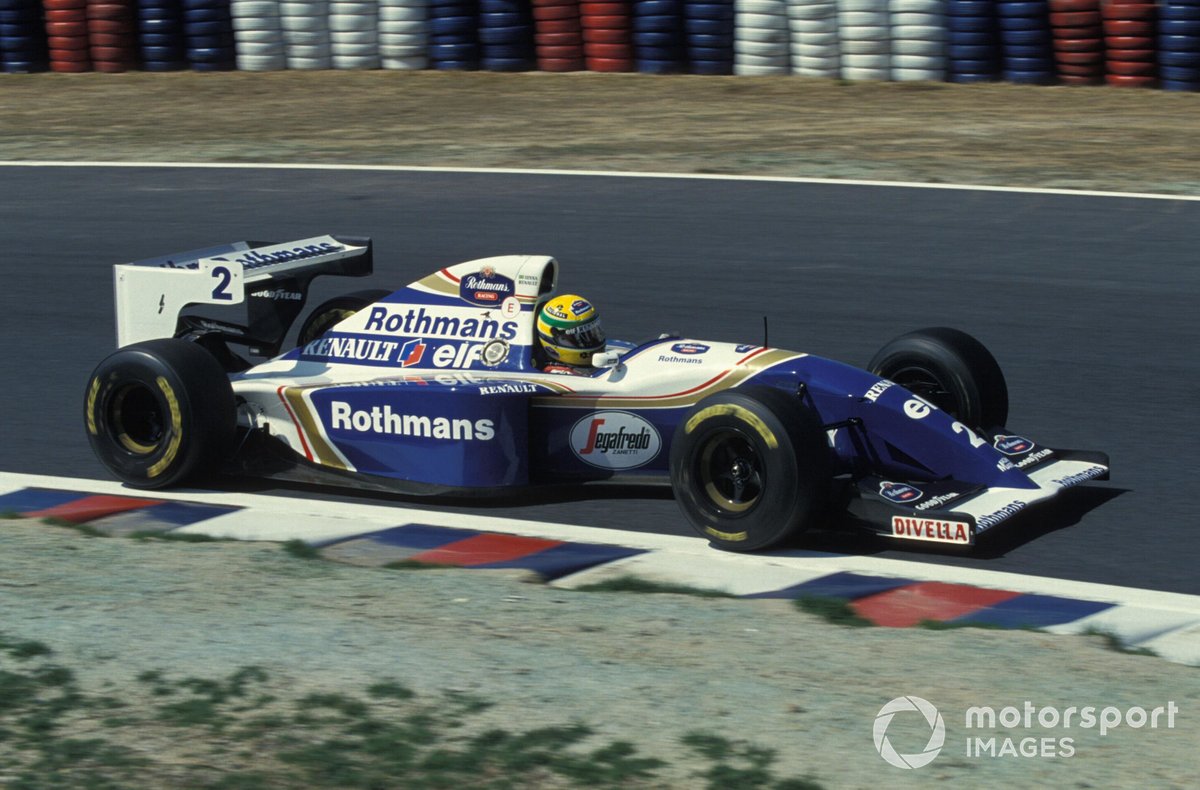 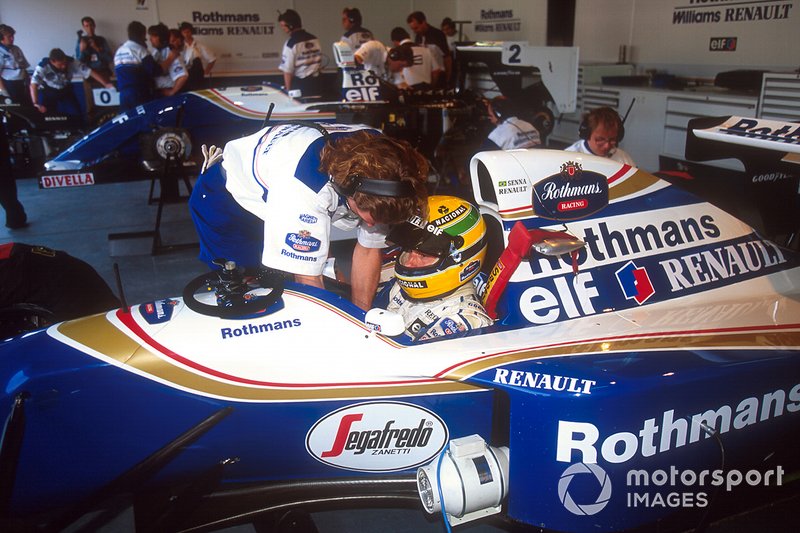 Fateful words, indeed. Schumacher, meanwhile, was disappointed not to be able to challenge for pole, but was buoyant about his race chances…

“I waited until near the end in the hope that the track would be faster and, when I finally went out, the track was covered in oil, so there was no point in even trying to go quicker,” he said. “A pity, because we had improved the set-up even further. But at least I am starting from the front row of the grid – the gap to Senna is smaller than Brazil – and I am looking forward to tomorrow because we found a good race set-up this morning.” 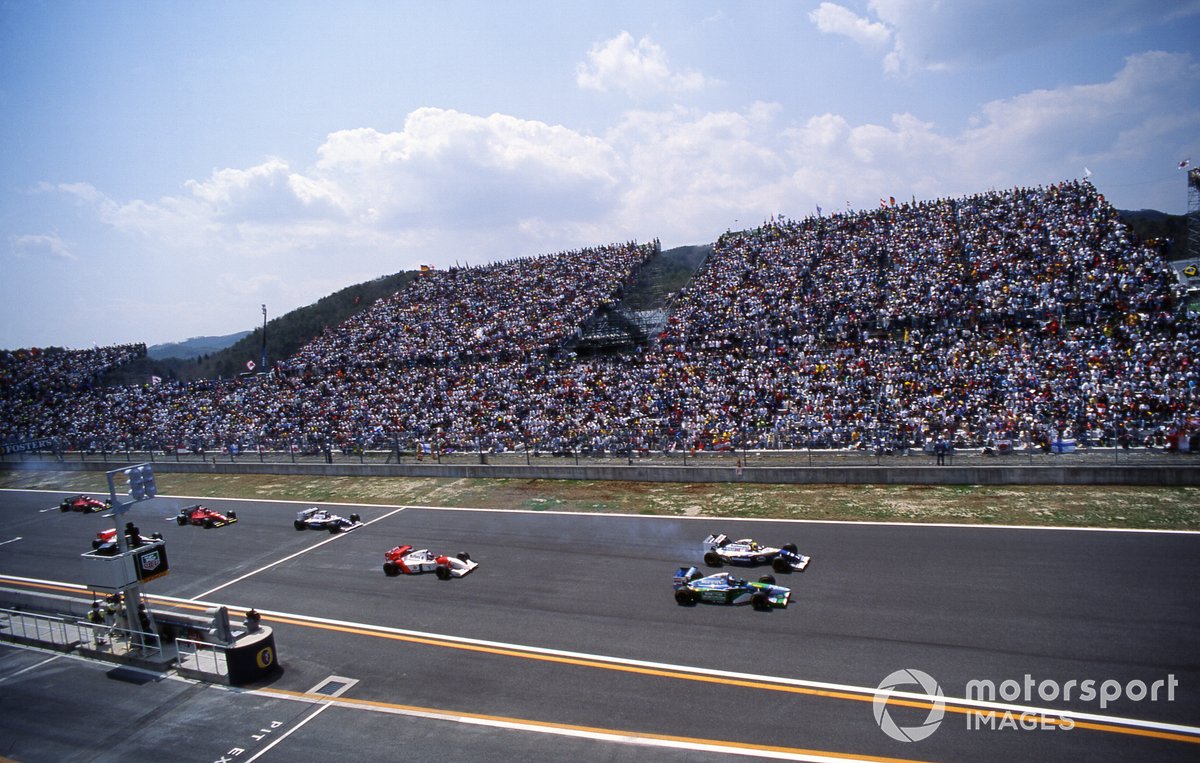 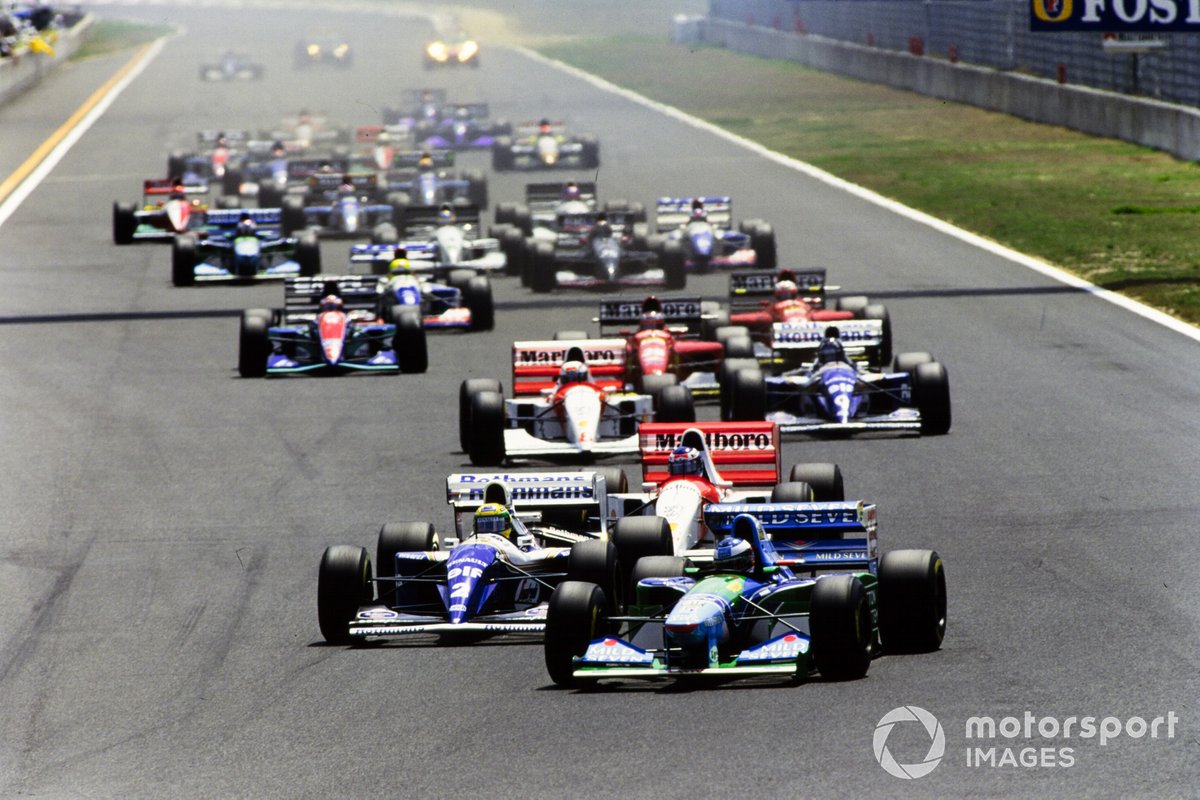 Schumacher got an amazing launch from the startline in Sunday’s race – adding fuel to the suspicions over Benetton’s starts – and he was already ahead of Senna, whose car snaked under power off the starting grid, before Ayrton could move across to block him in the race to Turn 1. There, Senna opted not to challenge Schumacher, but probably wished he had moments later, as Hakkinen’s McLaren punted him from behind in the middle of the corner into a spin.

After rotating into the gravel trap, Senna’s miserable race was completed by Nicola Larini – subbing for the injured Jean Alesi at Ferrari – who joined him in the gravel trap and slammed into his Williams as it slid backwards. The impact snapped the right-front suspension of Senna’s car, while Mark Blundell’s Tyrrell spun in sympathy, having also been punted from behind, this time by Erik Comas. 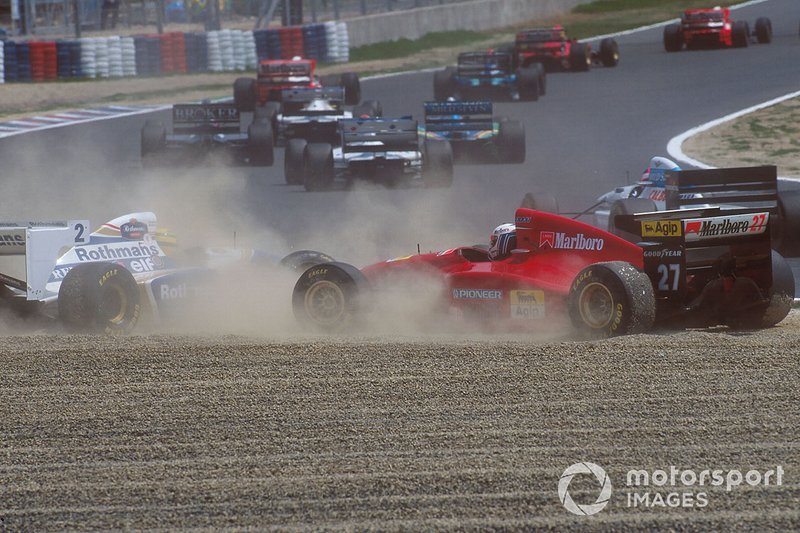 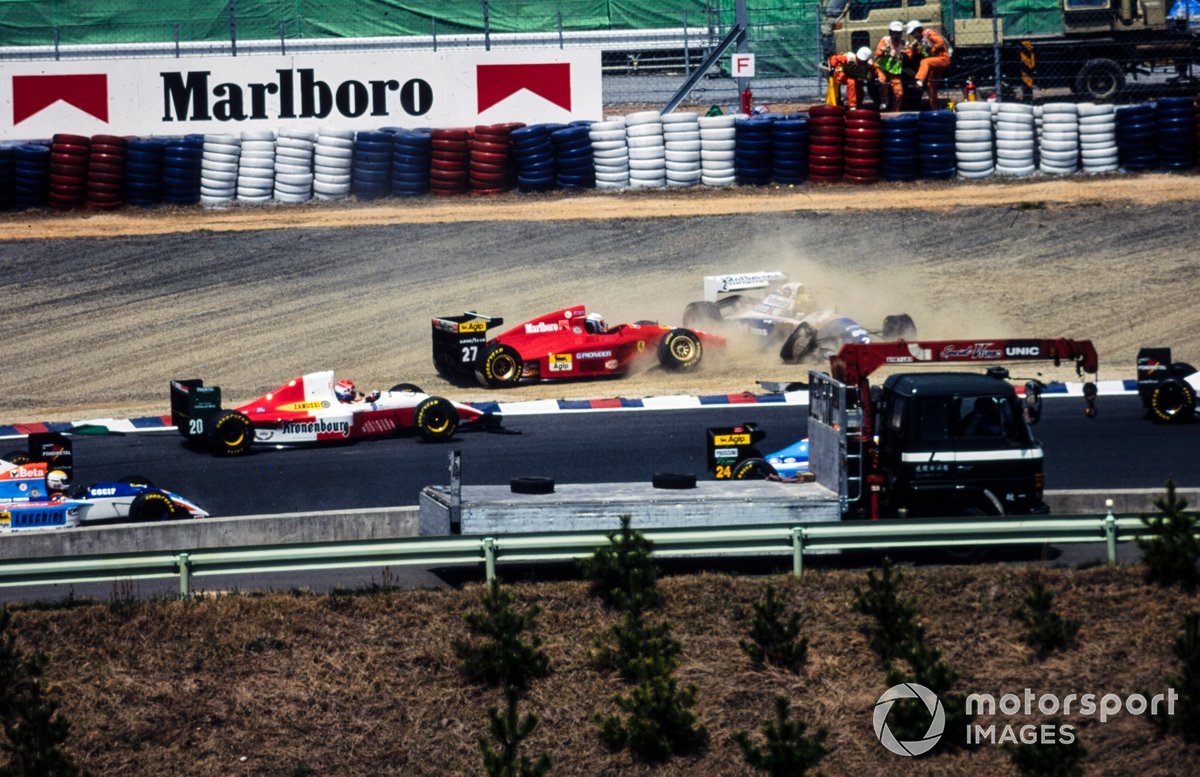 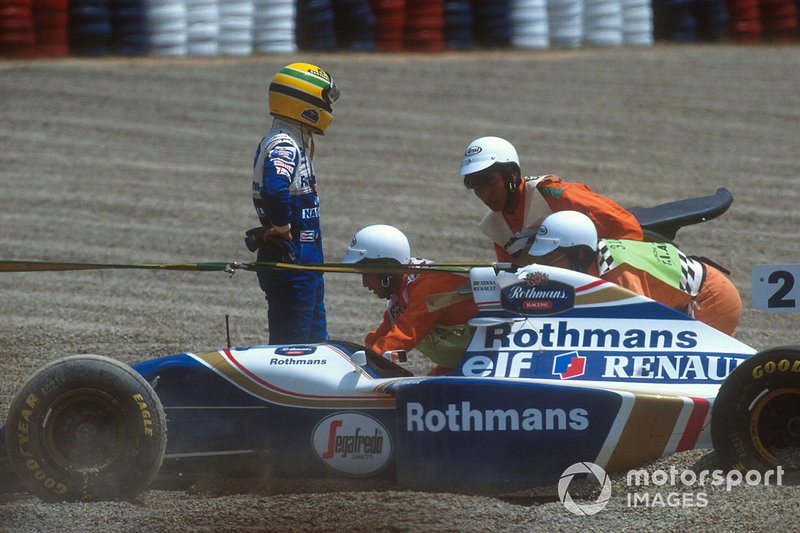 Senna recounted: “It was a normal start, but I didn't get a brilliant one. I had too much wheelspin so Michael took the lead. On the first corner we were close together and it was possible to try an overtaking manoeuvre, but that would be very risky, so I decided to stay second and be safe.

“Then when I was into the corner Mika came from behind, hit me and I was out. As a consequence other cars spun and then Larini came and hit me. I was out of the race.”

Of the incident with Senna, his former McLaren teammate (from the end of ’92) Hakkinen said: “It's a pity I touched Ayrton, but he braked late, as did Michael in front of him. I couldn't avoid him.” 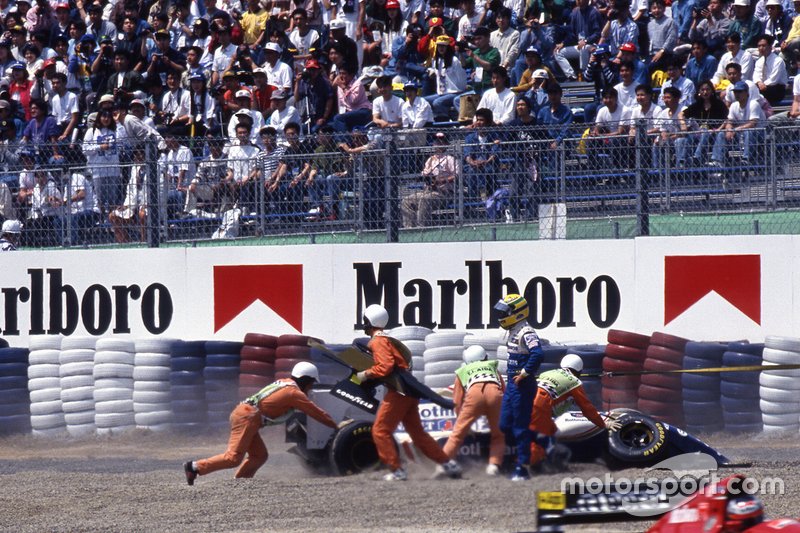 Ayrton Senna, Williams FW16, crashes out of the Grand Prix on the first lap 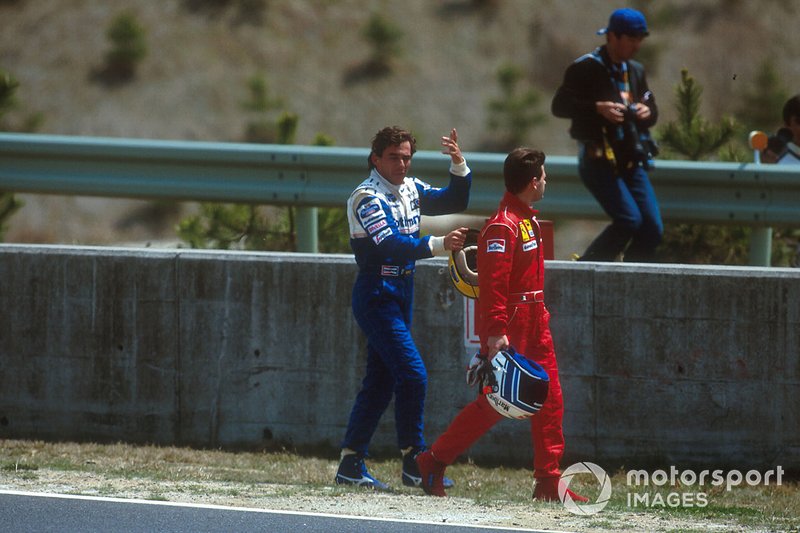 Unfortunately for Senna there would be no red flag and restart, as marshals quickly cleared up the mess. He was left to stomp back to the pits, shrugging off Larini’s attempts at an apology as they crossed the track.

Senna didn’t return to the pits immediately. Having been met by Williams team manager Ian Harrison (who was keen that his charge didn’t get into a fight with Larini), Ayrton chose to watch the race trackside for a few minutes. Following this, Harrison has since said that Senna was “utterly sure” that there was something Benetton was doing that was untoward.

In time, Benetton was exonerated by the FIA following an investigation into its potential use of traction control that season, as it could not prove that the team had used such a system on race weekends. However, it did uncover that a launch control system was hidden in its software, but the team successfully argued that it could not be accessed outside of testing.

Schumacher was 2.6s clear of Hakkinen at the end of lap one, and rattled off the following 82 laps with ease. He won by 1m15s from Ferrari’s Gerhard Berger and the Jordan of Rubens Barrichello – Hakkinen having dropped out on lap 19 with a hydraulic-related gearbox problem. 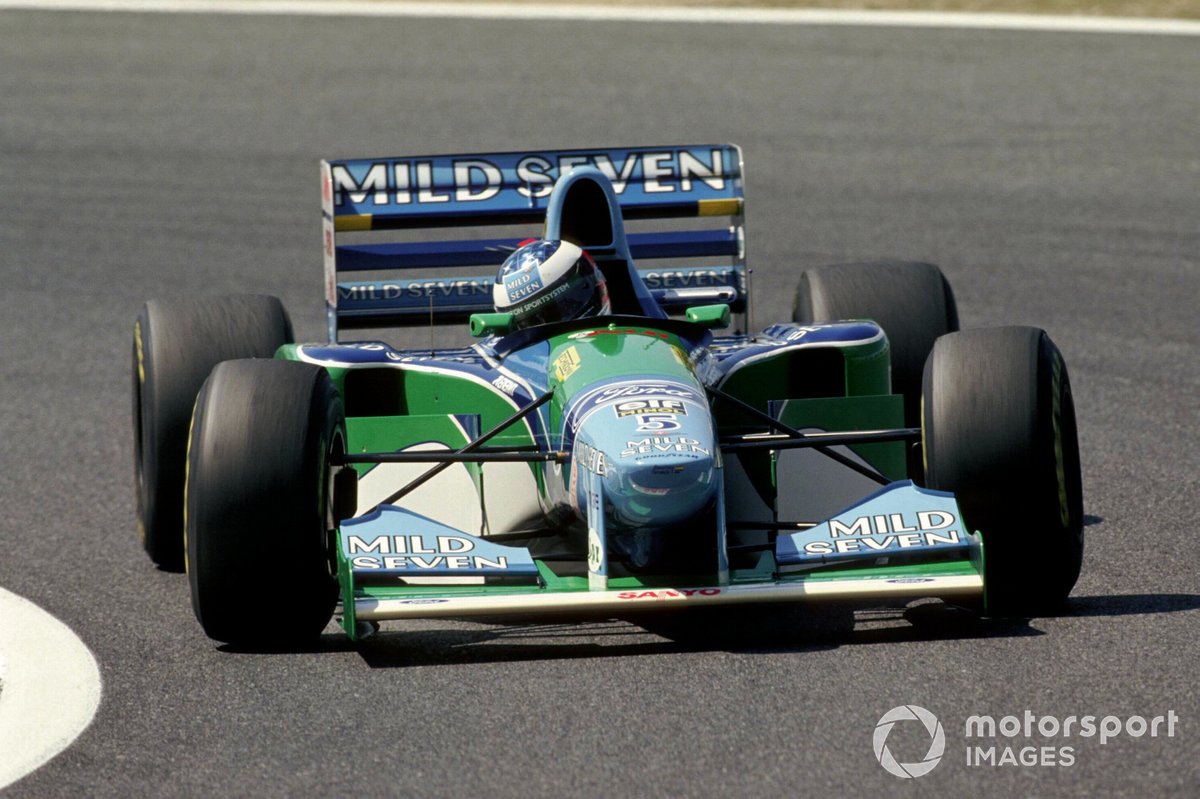 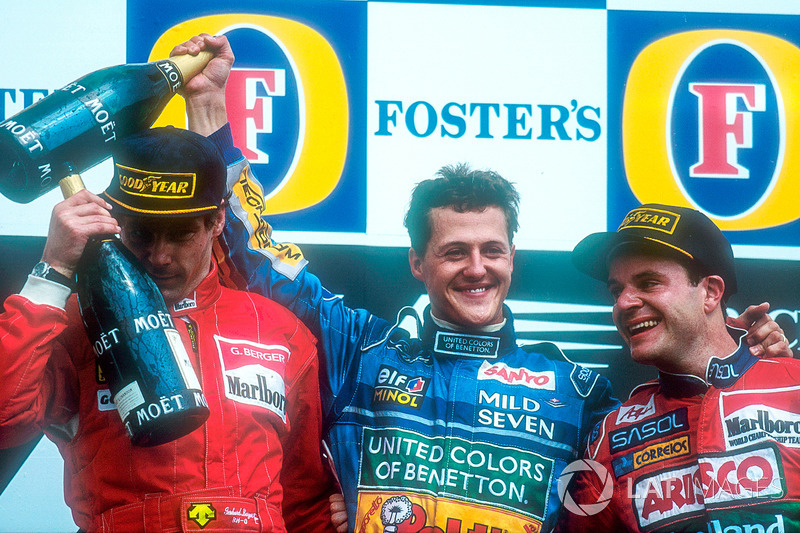 Schumacher was jubilant after the race, after scoring his second victory of the season having triumphed on Senna’s home turf in Brazil.

“I think we were a bit unlucky not to get pole position but I knew that our race set-up was good,” said Schumacher. “Obviously, the start was going to be crucial. I had done all I could to make sure the track was as clean as possible even though I was starting from the dirty side of the grid.

“I had tried some starts recently – and that work paid off. I managed to outbrake Senna into the first corner and then I looked in my mirror and saw that he was off the road. I was worried that they would stop the race and I must admit to being relieved when I saw no red flags at the end of the first lap.

“From then on, I knew we had a very good possibility of winning, not just because our main competitor had been eliminated, but because the Benetton-Ford is really, really good.”

The next stop was Imola… 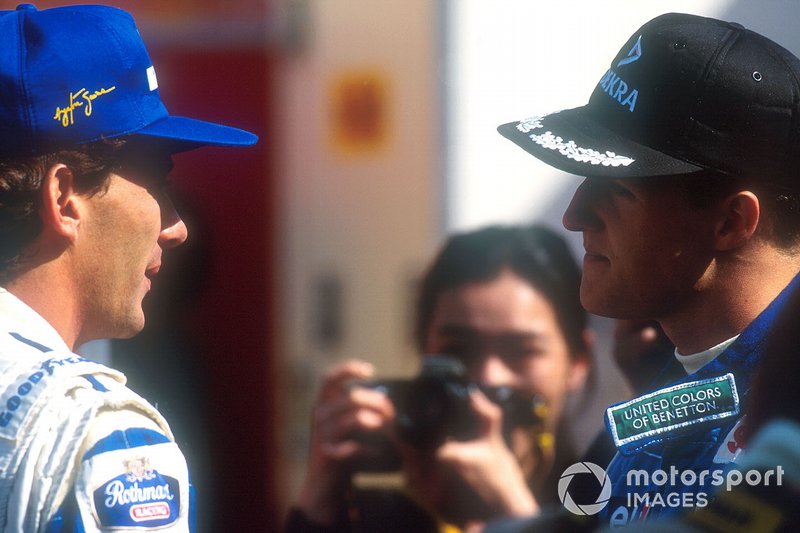 McLaren resurgence 'could be delayed' by F1 shutdown

Why F1's furlough debate isn't as clear cut as in football