Strategy Report: Did Mercedes pull a punch in Vettel fight?

James Allen analyses the Bahrain Grand Prix, a far more interesting race strategically than in Melbourne, and wonders if Mercedes could have been more ruthless.

Bahrain has one of the highest levels of abrasive tarmac of the season. It’s also very tough on brakes with big stops and that means that it’s easy to lock a wheel and flat-spot a front tyre. If you are doing a one-stop race with a long stint, flat-spotting a tyre early in that stint can ruin a strategy.

This year we saw several drivers go for the long stint on mediums – Sebastian Vettel went for it on softs and got away with it – but Charles Leclerc, for example, had his race compromised by a flat spot.

As last year, Pirelli brought a tyre selection with the supersoft, a tyre that shows degradation. But this year Pirelli is a step softer across its range. That meant that the teams had to really think carefully about their strategy and again we saw a mixture of strategies, with the decision on whether to use soft tyres or medium tyres at the first stop.

It made for an engaging race with plenty of overtaking and this is certainly what we want to see – rather than 2017’s conservative selections; back then, the likelihood was of almost no degradation and one stop strategies, where drivers finished in car performance order. 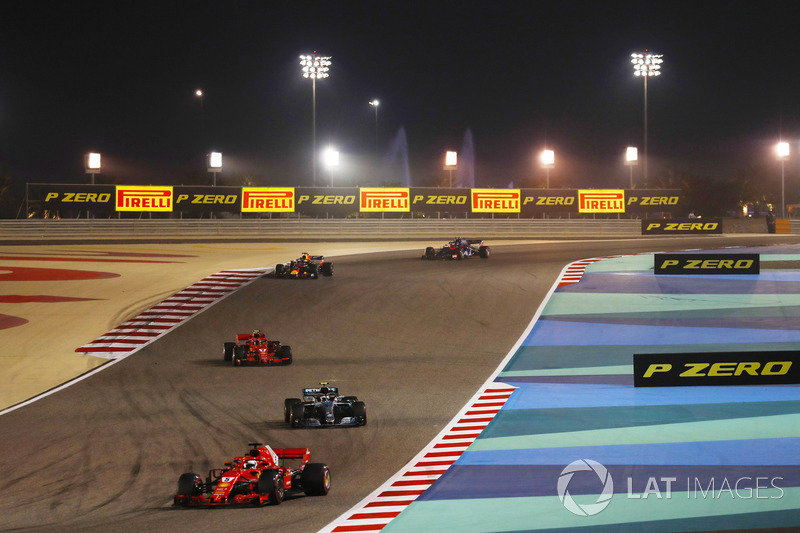 The battle at the front

Bahrain is the third-highest ‘start bias’ of the year, meaning that it is number three in the chart of tracks where the clean side of the grid has an advantage over the dirty side.

Kimi Raikkonen was deflated after missing out on pole, not only because he had been faster than Vettel again up to that point, but because he knew that there was a strong chance that he would lose places starting on the dirty side. And so it proved; Valtteri Bottas dived past and into second place. This put Mercedes in a position to play some chess moves.

A few places back, Pierre Gasly (starting fifth) passed Daniel Ricciardo, but the Australian was able to repass. However, soon after he retired due to an electrical shutdown.

The key to doing well in Bahrain is not simply to look at how the cars and tyres perform on Friday FP2 and then carry across the same expectations, but to adjust the expected degradation for a track that will improve in condition from Friday to Sunday.

So for cars that were able to start on the soft tyres, the fastest race was soft-medium, avoiding the supersoft all together. The supersoft to medium one stop was quite a bit slower on paper. This is the strategy that Valtteri Bottas ended up doing, as Mercedes rolled the dice to try to outfox Ferrari.

Lewis Hamilton did soft-medium and got to the podium from ninth on the grid, while Marcus Ericsson in the Sauber did the same and scored two points, which is like a win for Sauber, even if its expectations are higher now it is partnered with Ferrari and Alfa Romeo.

Sauber was the first to pit to medium tyres with Charles Leclerc under the Virtual Safety Car. This gave everyone a good read on the performance of that tyre in those evening conditions as temperatures gently fell. Leclerc was faster on the medium tyre than the Williams of Sirotkin ahead of him on soft. Alonso was another driver going well on the medium. 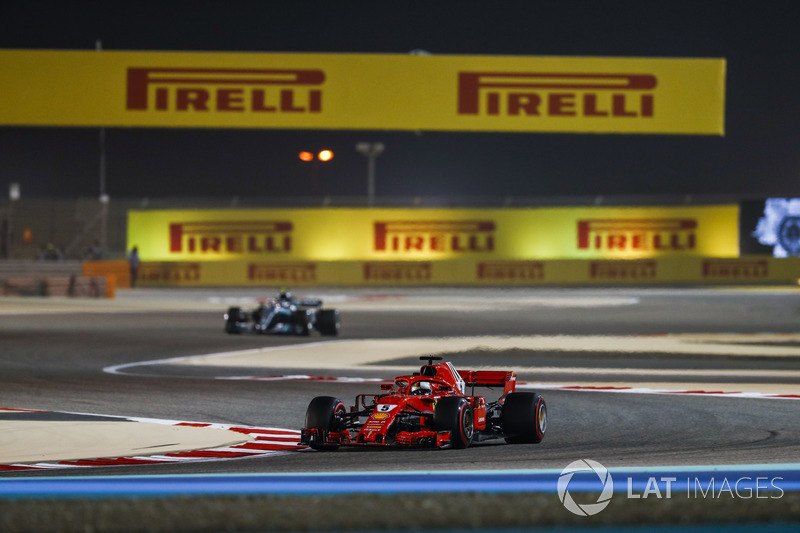 The big surprise towards the end of the race was that Vettel was able to make the finish on soft tyres that were 39 laps old. Ferrari was certainly not planning on one-stopping that car, but at a certain point after Mercedes made a chess move by putting Bottas onto mediums as well as Hamilton (who was also in Vettel’s pit window), Ferrari were caught out and had to either stick or twist.

What they did was a Plan D. It had started well enough; as last year the Ferrari was faster on the supersoft tyres and could extract more performance from them.

Ferrari could have expected Mercedes to change tactics with Bottas and one-stop, as he was not able to get within undercut range of Vettel to try a move on a two-stop plan. Once Ferrari pitted Vettel and closed off the undercut possibility, Mercedes’ decision on what to do with Bottas became easier.

Knowing that, the alternative for Ferrari at this point would have been to anticipate it and cover off Mercedes’ spoiler tactic by putting Raikkonen onto a supersoft-medium strategy. But, on his stop at Lap 19, it went for the same soft tyre middle stint as Vettel.

Raikkonen’s race, however, was ended by an unfortunate incident in the second pit stop on Lap 35, where he left the pit box before the rear left tyre had been changed, knocking over and badly injuring one of the mechanics.

This could have turned the race; with the confusion in the Ferrari garage as Raikkonen’s car was pulled back and the mechanic was attended to, it could not pit Vettel.

Mercedes could have capitalised on this – with Ferrari not prepared for a stop and a man down – they could have gone for the jugular, and panicked Ferrari by stopping one of its cars at this point.

But it decided that this would not be a correct thing to do and would be judged harshly; a rare example of scruple in a fierce competitive battle.

Bottas’s tyres were holding up well and Mercedes knew that he would still have plenty of chances later if Vettel stopped again – and also if he didn’t. It was around 17 laps from the end that Mercedes realised for sure that Vettel would not stop again. 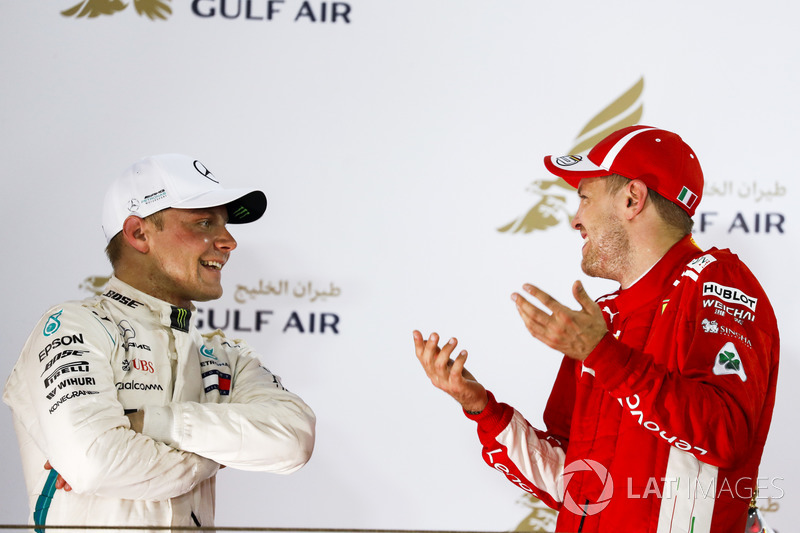 Vettel described Mercedes’ move with Bottas on to mediums as being ‘checkmated’ in chess.

The question then was – would he be able to stop again, fit a set of supersofts and overtake the Mercedes cars by the end? As he would have had to pass both of them on track, it would have been very hard to come through to take the win. Second place was more likely.

Ferrari’s only chance of the win was to stay out and for Vettel to keep the tyres alive. This was 100% his win due to tyre management, especially in the final two laps.

Bottas lost the race partly because he lost more time coming through traffic in the closing stages than Vettel, but also because Mercedes probably should have given him the notice to ‘push’ a lap earlier, once they were sure Vettel wasn’t stopping again.

He couldn’t capitalise on his one chance to overtake into Turn 1. This is the place to do it as the DRS gives a 12-metre gain, compared to the end of the back straight. With Vettel 1.8 seconds per lap slower in the final two laps, the Ferrari would not have been able to defend adequately. Bottas half-went for it but didn’t force the issue.

Hamilton’s race was not helped by a radio problem, which meant that the team could not hear what he was saying. It didn’t change the result he would have got. The challenge was to be patient to see what Vettel would do, as he wanted more information on what he should be doing. 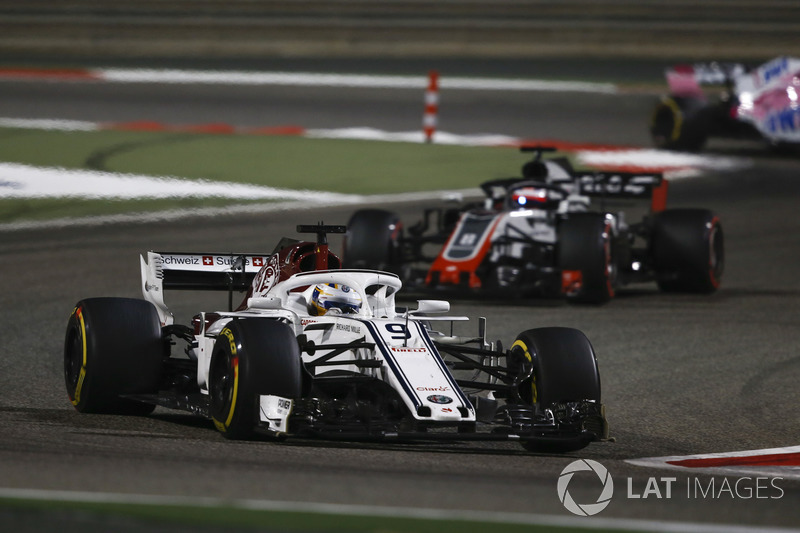 It is tough at the back of the F1 grid and two points for Sauber in Brazil late in the 2016 season virtually saved the team and put Manor Racing out of business. With only 10 teams now, that is not so critical as before, but still something to celebrate.

Here it scored two points. Ericsson’s race in Bahrain was interesting as he committed to the one stop soft-medium at the ideal moment and also executed a specific goal – he didn’t waste the tyres on trying to fight the group of cars coming through on two stops: Hulkenberg, Alonso and Vandoorne.

His race was not with them but with the cars further back: Ocon, Sainz and Perez.

The judgement was that he would be able to stay ahead of them; each was on a different strategy that had been compromised in some way, either by a poor start or traffic or a spin. 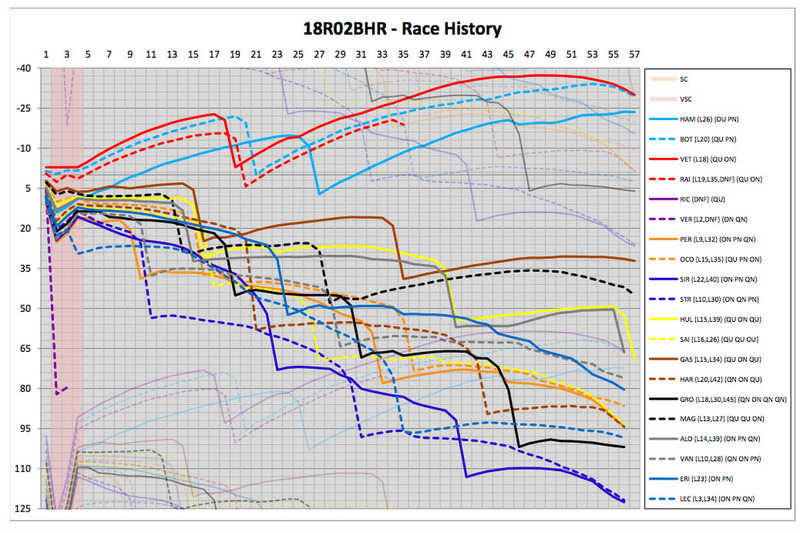 Note the steep drop off in Vettel’s lap times in the final laps and Bottas’s closing speed. The Finn should have won the race.

Also note Ericsson’s management of the medium tyres to keep ahead of the Ocon Sainz, Perez group. 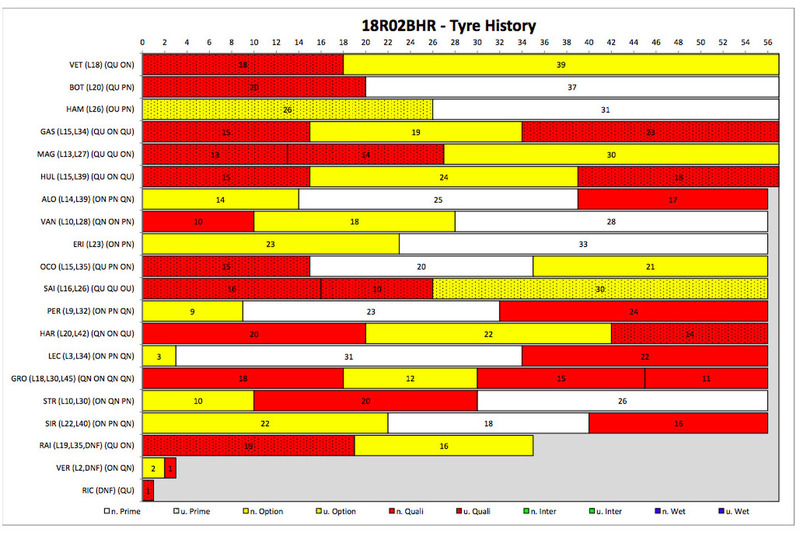 Mercedes admits response to Vettel strategy was “too slow”