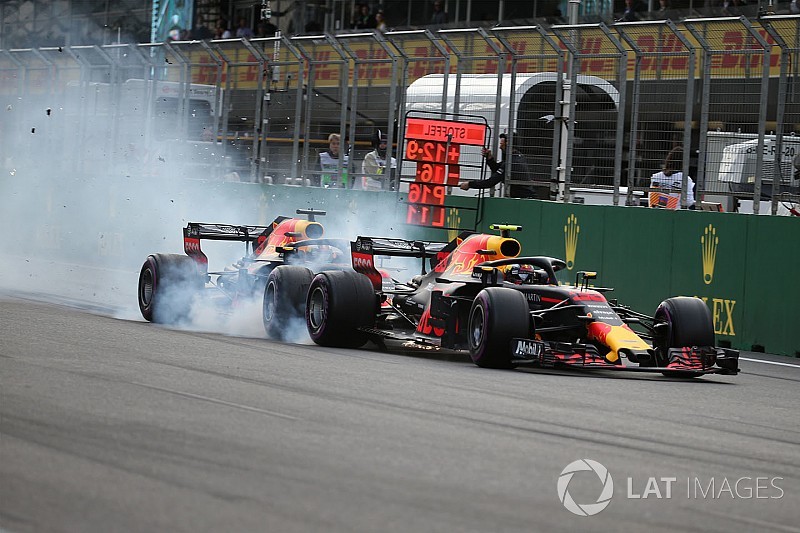 Red Bull's hesitance to act before its two Formula 1 drivers crashed into each in Azerbaijan suggests the team supports Max Verstappen over Daniel Ricciardo, according this week's Motorsport Show.

The teammates were eliminated from the Baku race in spectacular fashion when Ricciardo rear-ended Verstappen at Turn 1 after a fraught race-long fight.

Host Peter Windsor asks this week's Motorsport Show panel members Alan Gow and Matt Bishop if Red Bull's inability to move Verstappen aside will feed those who believe the team favours the Dutchman.

"I think it backs up the theory that Red Bull are much more behind Max than they are behind Daniel," says British Touring Car Championship series director Gow.

Verstappen and Ricciardo had already made minor contact earlier in the grand prix and both panellists believe Red Bull should have intervened more forcefully.

"If I was [Red Bull team boss] Christian Horner I would have probably handled the situation a little bit better," says Gow. "Daniel was clearly quicker than Max, they should have made a call and said you go past him.

"Yes, they are both number ones, but you still have to manage each race as it comes and I don't think they managed that one at all."

Bishop admits that "we don't know everything that was said on the radio" but suggests Red Bull lacks the steel to properly implement a team order.

He says: "It reminded me of Malaysia 2013 [when Sebastian Vettel defied a team order and attacked Mark Webber], Christian saying, 'oh come on Seb, this is getting silly'.

"That doesn't seem to be to me the absolute authoritarian directive from the pitwall we would have expected from Ross Brawn, for instance."

A Jordan F1 show car for sale in Québec