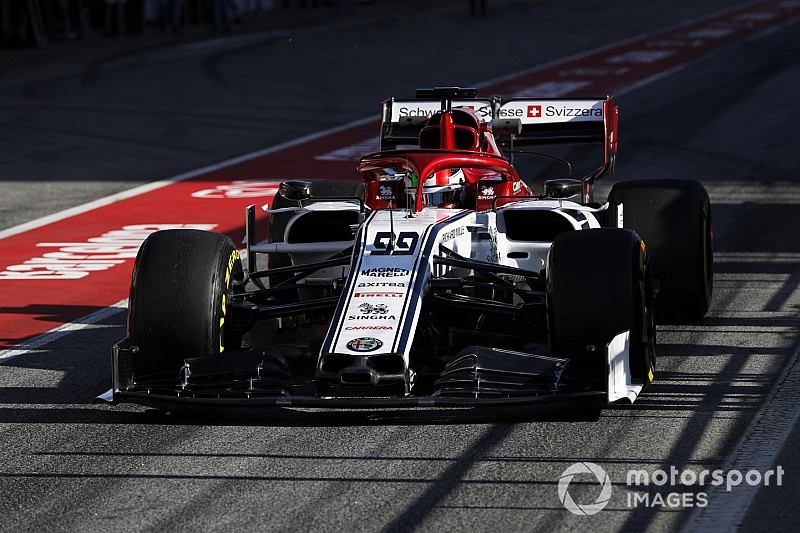 Giovinazzi deposed long-time leader Pierre Gasly for the top spot inside the final 20 minutes after the Red Bull driver led from within the first hour of the morning.

He then alternated between cool-down laps and flying efforts and improved to 1m19.077s.

His final benchmark of 1m18.647s, still on the C3 tyre, came during the second hour as Ferrari's Charles Leclerc and Giovinazzi began to battle over second.

Leclerc had managed just six laps before McLaren's Lando Norris caused a red flag around the mid-way mark because his Ferrari team needed to check its cooling systems.

When Leclerc returned to the track, he quickly began to set personal best lap times to climb to third, before displacing Giovinazzi with a 1m18.651s lap.

Giovinazzi had ended up third and 0.70's adrift of Leclerc in the final hour, but the Alfa driver bolted to the leading spot with a time of 1m18.589s late on using the C4 tyre.

That left Leclerc in third, behind Gasly, with his best time coming on the C3 tyre.

Racing Point's Lance Stroll was fourth and briefly ran Pirelli's unmarked C3 tyre in order to help the manufacturer validate its compounds, and set his best lap midway through the session.

Stroll completed 44 laps after Racing Point struggled to accumulate mileage in the first week of testing.

Haas's Kevin Magnussen spent the majority of the session completing long runs on the C2 compound and placed fifth with 84 laps completed, showing no repeats of the 'gremlins' that had affected its first week of running.

Williams had an encouraging start to the second test, with George Russell's total of 46 laps proving to be more than his entire mileage in the first week.

His time of 1m19.662s on the C3 tyre also proved competitive, placing him sixth overall, after Williams's early runs placed Russell in the 1m40-50s range in a conservative start to the week.

Toro Rosso's Alexander Albon completed just nine laps in the first half of the session, but returned following the red flag to take his total to 39 laps and placed seventh.

Lewis Hamilton was only eighth on the timesheets as Mercedes debuted a new-look front wing that was planned prior to last week's opening test.

The reigning champion outfit largely focussed on long runs on the C2 compound, with Hamilton the session's first pacesetter.

Renault had struggled to complete long-distance running in the first test but Nico Hulkenberg completed 80 laps, more than anyone other than Magnussen, by largely using the C2 and C3 tyres.

Norris caused the session's only red flag when he pulled off the track midway through the session on his 38th lap.

McLaren has yet to confirm what caused Norris to stop.