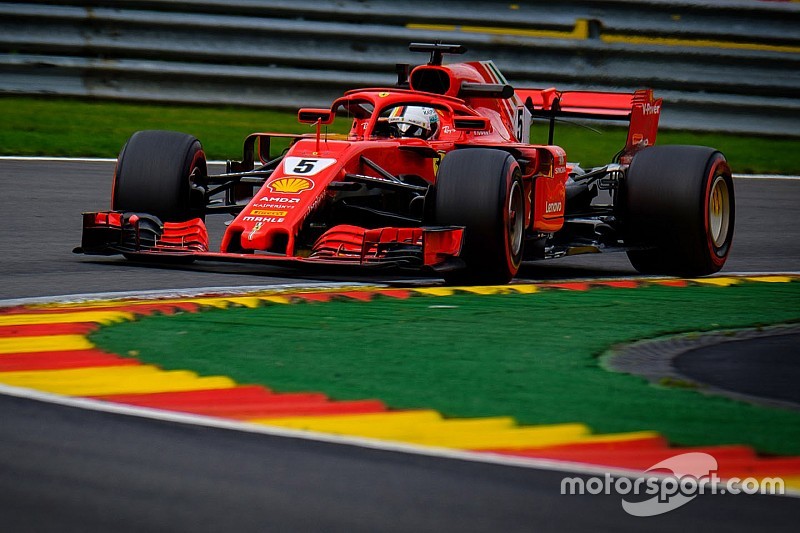 Sebastian Vettel headed a Ferrari one-two in the final Formula 1 free practice session ahead of qualifying for the Belgian Grand Prix.

Kimi Raikkonen set the pace early on using supersoft rubber, setting a best lap of 1m43.425s 11 minutes into the one-hour session to outpace soft-shod Lewis Hamilton by a tenth of a second.

That laptime was not beaten until the Mercedes and Ferrari drivers headed out again on fresh supersofts, with Raikkonen improving his time to a 1m42.734s with 20 minutes remaining to consolidate top spot.

Vettel then slotted in behind him just 0.033s slower, with Hamilton a further 0.029s down.

Vettel then took top spot on his second push lap on the same set of supersofts with 15 minutes remaining, posting a 1m42.661s while Raikkonen only improved to a 1m42.724s moments before reporting a few spots of rain.

The final runs were delayed by a red flag with 10 minutes remaining caused by Stoffel Vandoorne crashing on the Kemmel Straight.

The McLaren driver was on a hot lap when he was closing on Mercedes driver Valtteri Bottas, who was on an out-lap.

Vandoorne closed on the Mercedes, which was still building up speed, and moved to the left coming through the gentle right-hand kink on the Kemmel Straight.

Bottas then drifted left and forced Vandoorne onto the grass, leading to the McLaren spinning across the circuit and lightly into the barrier on the opposite side.

The stewards will investigate the incident after the session, with Vandoorne saying over the radio: "What the hell was that Mercedes doing? He pushed me on the grass."

Bottas admitted over the radio that "I didn't see him", and clearly was unaware the McLaren was closing on him having just the other McLaren of Fernando Alonso, who Vandoorne was getting a tow from, past.

The session was restarted with only two minutes remaining, with a long queue forming at the pitlane exit ready for the restart for the charge to get to start a flying lap.

In the hurry to get out, Toro Rosso driver Pierre Gasly spun joining the track through the right-hand corner at the pit exit,but was able to rejoin.

Those towards the front of the queue were able to get around quickly enough to get in a flying lap, although neither the Ferrari nor the Mercedes drivers were able to make attempts.

This ensured Vettel led Raikkonen for a Ferrari one-two, with Hamilton and Bottas ahead of fifth-placed Max Verstappen, the Red Bull driver improving his time to a 1m44.048s after the red flag but not changing his position.

Red Bull driver Daniel Ricciardo was sixth fastest, four tenths slower than his teammate, with Charles Leclerc consolidating his seventh place by improving late on and setting a time 2.302s off the pace.

Sergio Perez, Nico Hulkenberg and Esteban Ocon rounded out the top 10 with their fastest times set earlier in the session on soft rubber.

Hulkenberg, who will start from the back of the grid thanks to a Renault power unit change yesterday, also took another new turbocharger ahead of this session.

Marcus Ericsson was the third and final driver to improve after the red flag, securing 11th place ahead of Haas driver Romain Grosjean.

Carlos Sainz, like Renault teammate Nico Hulkenberg, ran the new floor but was one of the many drivers not to complete a proper qualifying simulation.

He ended up ahead of the second Haas of Kevin Magnussen and Gasly.

McLaren pairing Alonso and Vandoorne were slowest, having both set their times before the red flag using medium-compound Pirellis. 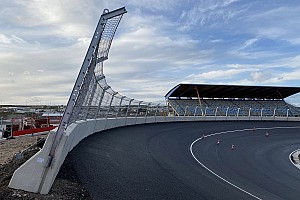 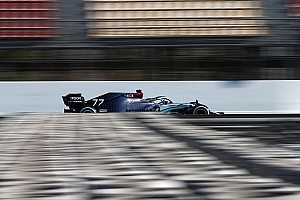