McLaren evaluated a new rear wing configuration on Fernando Alonso's car in practice at the Singapore GP, that saw the Woking-based squad take an idea first introduced by Toro Rosso at the start of the season and build on it.

The work done during that session was simply for correlation purposes, with the team confirming that the numbers produced in CFD and the wind tunnel beared enough resemblance for the set-up to be used going forward. 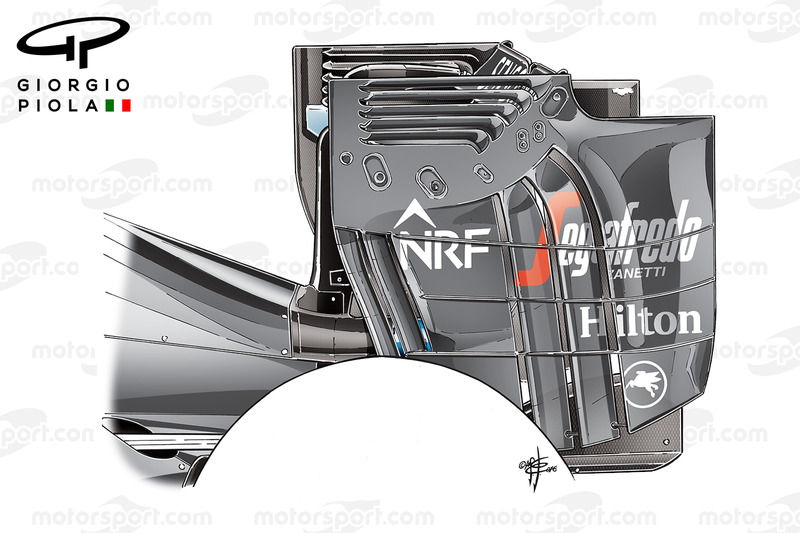 This has particular significance given the time and money spent developing the aggressive rear wing design that featured briefly in Austria before being discarded (above), as it didn't give representative performance and made the car particularly difficult to manage during transitional phases.

Both cars have been outfitted with the new design for the Malaysian GP, with the wing expected to get the green light for the race.

The design features a more aggressive use of the open-ended endplate louvres already run by Toro Rosso, Sauber and Mercedes, with the slot length increased rearward toward the curvature of the mainplane and top flap.

These open-ended louvres, like their conventional counterparts, are used to control the vortex shed when the pressure gradients created by the flaps and endplate meet, improving downforce and reducing drag.

This more aggressive design approach should allow the team to increase the flap's angle of attack to improve downforce, whilst trading it off for the equivalent if not less drag.

An interesting aside is the way in which McLaren has designed the lowest of the slotted louvres, almost making the lower part of the endplate into a separate element, with a curvature on that sections upper leading edge.

It would be interesting to see how this design consideration impacts performance in a visual medium such as CFD, as we are unlikely to see such comparisons, unless damp conditions allow us to capture the visual formation of the vortices.

Vettel says mule car not a fair reflection of 2017 downforce

Ex-F1 racer recovers helmet that was stolen 23 years ago