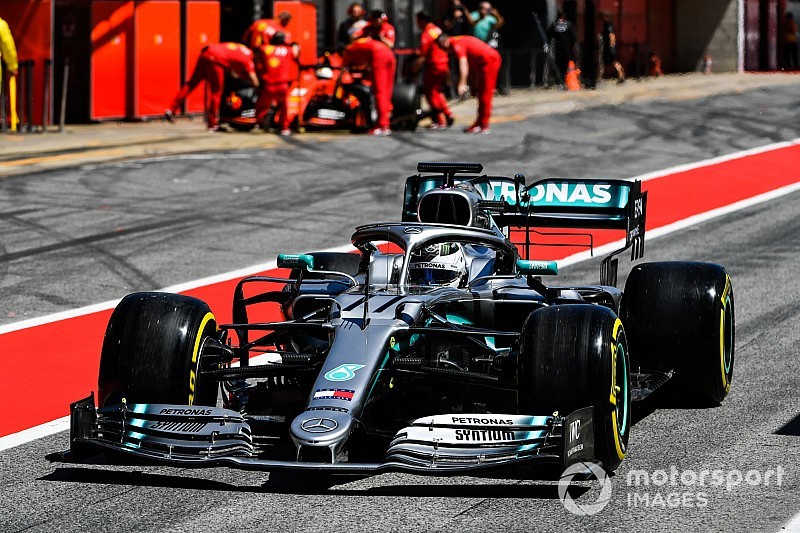 Valtteri Bottas topped the first day of the Barcelona Formula 1 test with a laptime just a tenth of a second slower than his Spanish Grand Prix pole position mark.

The Mercedes driver had headed the morning running, but improved his time in the afternoon using the Pirelli C5 tyres, which are two steps softer than the softs used during the grand prix but will be available in Monaco next weekend.

At the same time, Toro Rosso driver Daniil Kvyat moved up to third, setting a time of 1m17.679s on C4s.

Renault driver Nico Hulkenberg secured fourth place half an hour after running resumed with a time of 1m18.051s set on the C3 Pirellis.

Red Bull driver Pierre Gasly had an early end to his programme when he ground to a halt with 70 minutes remaining with a suspected transmission problem that struck at the exit of the chicane.

By that time, he had completed 118 laps and done enough for fifth place, 2.629s off the pace with his time set on C3s.

Carlos Sainz’s morning time left him in sixth place, with Lando Norris taking over the McLaren for the afternoon and taking 10th with a time set on C3s.

Haas tester Pietro Fittipaldi jumped up to seventh place in the closing minutes with a time just 0.063s slower than Sainz, putting him just 0.035s ahead of Racing Point simulator driver Nick Yelloly.

Ilott’s day came to an end just before the halfway point of the four-hour afternoon session when he crashed heavily at the fast Turn 3 right-hander the lap after he had set his best time.

He escaped injury but the car was too badly damaged to get back out again before the end of the session.

Williams driver Nicholas Latifi was slowest, 5.519s off the pace.

Ferrari, Red Bull max out on softs for Monaco