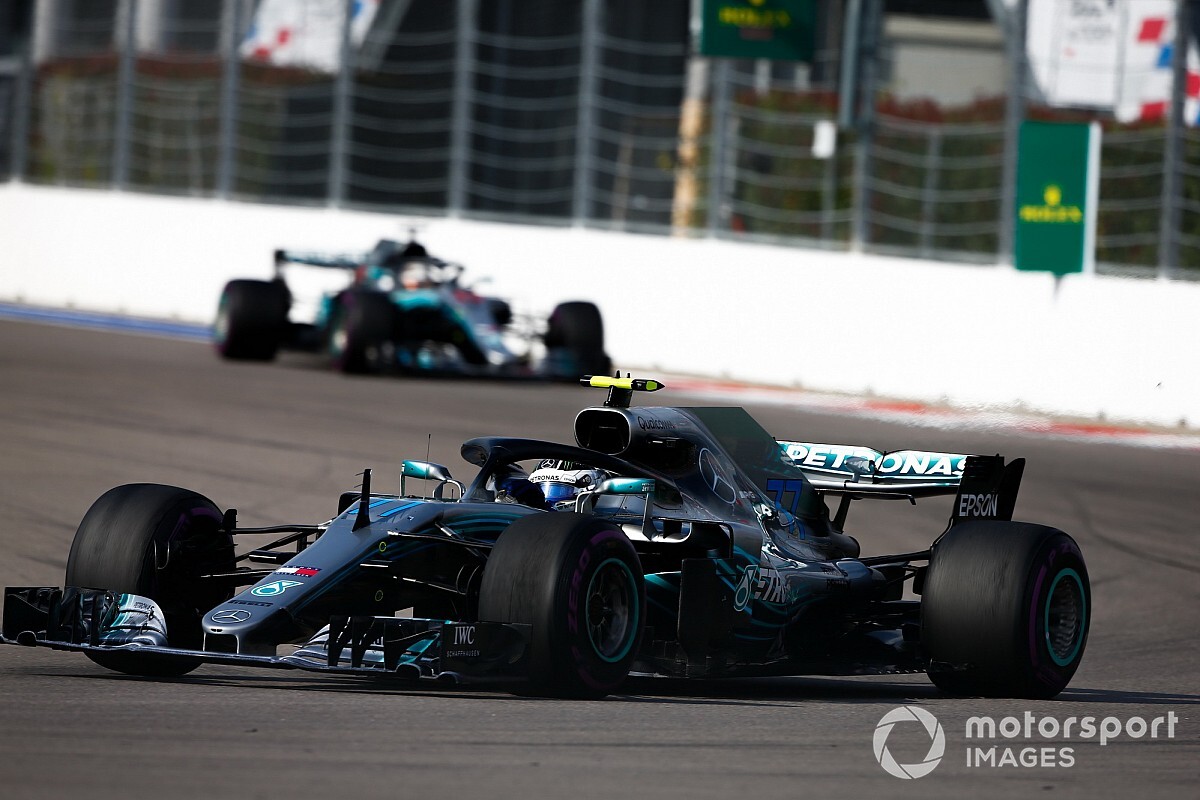 Valtteri Bottas was surprised to be told to move aside for Mercedes Formula 1 teammate Lewis Hamilton during the Russian Grand Prix and found the communication of the order confusing.

Mercedes told net race leader Bottas to let Hamilton by before mid-distance, citing a blister on Hamilton's left-rear tyre and the proximity of his title rival Sebastian Vettel as the reason for the move.

It claimed it had not anticipated that situation arising and Bottas suggested the problem was "maybe down to communications during the race and also before the race".

Asked by Motorsport.com if the way it was handled was the main issue, Bottas said: "Yeah, it was slightly confusing.

"It was not something we had planned. Normally we go through everything before the race, all the scenarios, and how we would react to those things.

"What happened today, we could never expect that to happen and it was very suddenly I got the call. I definitely didn't expect it, that's why it was a little bit confusing."

Bottas said he did not understand why he was moved aside after being told to attack Max Verstappen, who was leading the race on old tyres because he had not made a pitstop at that point.

"Suddenly I got a call to move over for Lewis. That was confusing."

Bottas said he was fine with an earlier order to back up Vettel as Hamilton prepared to pit because it was only to get Hamilton ahead of the Ferrari but not into the lead.

Sacrificing the win meant Bottas is still waiting for his first victory of the season but he said it was easier to do now as "there is nothing I can really achieve that really matters to me", even though he has moved ahead of Ferrari's Kimi Raikkonen into third in the championship.

Hamilton's win extended his points lead over Vettel to 50 points while Mercedes' constructors' championship advantage over Ferrari is 53.

"I don't expect anything back from the team," Bottas reiterated when asked by Motorsport.com if he had promised compensation in the future.

"When, if, I win I want to win like I've earned it in pure racing. As a person, as an athlete, it's not ideal. Today was really me taking one for the team."

Bottas did secure the fastest lap of the race late on as he and Hamilton pushed in the closing stages but said it meant nothing.

"I was still on engine save mode," he said. "It felt like I was cruising in the end, honestly. There was a lot more pace available throughout the whole second stint behind Lewis.

"There are no points for fastest lap but I know how much I had pace throughout the weekend and many people do know as well.

"For me, that's the main thing. That I know I could have won on equal terms."

Vettel didn't want to be a "complete arse" in Hamilton fight

Verstappen's early laps in Russia "like a wet race" - Horner