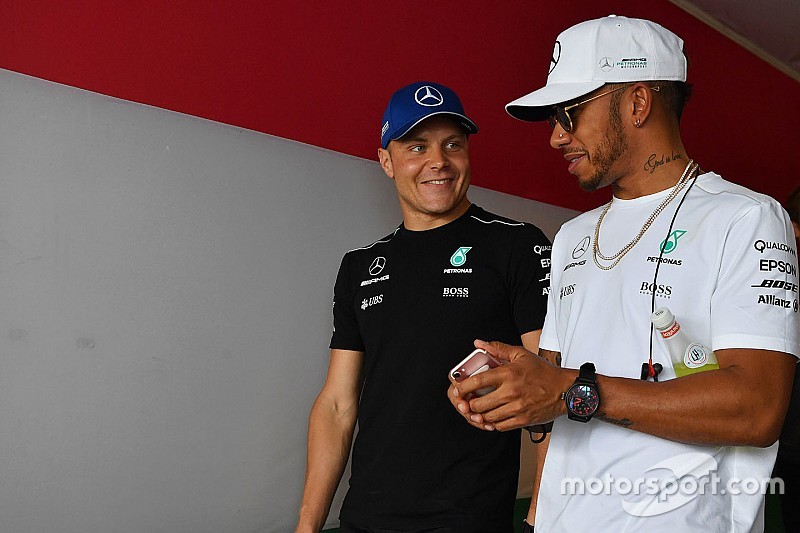 Valtteri Bottas says that the Hungarian GP place swap with Lewis Hamilton was a "perfect example" of how Formula 1 teams can benefit from a good relationship between their drivers.

The Finn, who partners Hamilton at Mercedes, said he was already feeling more integrated with the team than at the start of the season, and that Hungary was another step in the process.

"For sure, having done now 11 races with the team definitely you are more part of the team than after just a couple of races," he said. "I'm feeling very much part of the team. The teammate relationship with have with Lewis is really good.

"The team can really rely on both of you to try things like this today. It's only going to get better."

Bottas admitted that, having fallen back from Hamilton and with Max Verstappen catching fast, he was worried that the exchange of places wouldn't happen after all.

"I think when it was two laps to go I asked: 'When are we going to do the swap?'

"The team said that I just have to get a bit of a gap to Max and we'll do it at the end, and so we did. I was trusting the team. They told me at the beginning that if I let him go and he can't do it, we'll swap. When the team say something like that, it's going to happen.

"Max was not far behind with a fresh set of tyres, so that made it even more tricky. We managed to do it in the end. I'm really glad.

"We know that, for sure, it's not easy for Lewis to give up a podium place on the last lap, but that was kind of the deal, and really respect for that. Not every teammate would do that, I think. That shows that Lewis is a real team player as well.

"As a team we tried to maximise today with that kind of swapping, we unfortunately couldn't gain anything. But we tried, and it was the right thing to do."

While he couldn't keep up with the leading trio in the closing laps of the Hungary race, Bottas believes that was mainly down to traffic.

"They were going two Ferraris and Lewis as a train, once one guy lets them past, then all three cars get through then quite easily.

"And then as there was a bit of gap between us - they [the traffic] always got stuck in front of me for one and a half lap.

"It's so easy on this track to lose the rhythm, or if you need to overtake a guy over the marbles, then you lose nearly one lap to clear the tyres again.

"That was kind of my issue. I don't think there was much of a pace difference between me and Lewis today in normal conditions."

Top statistics from the Hungarian GP