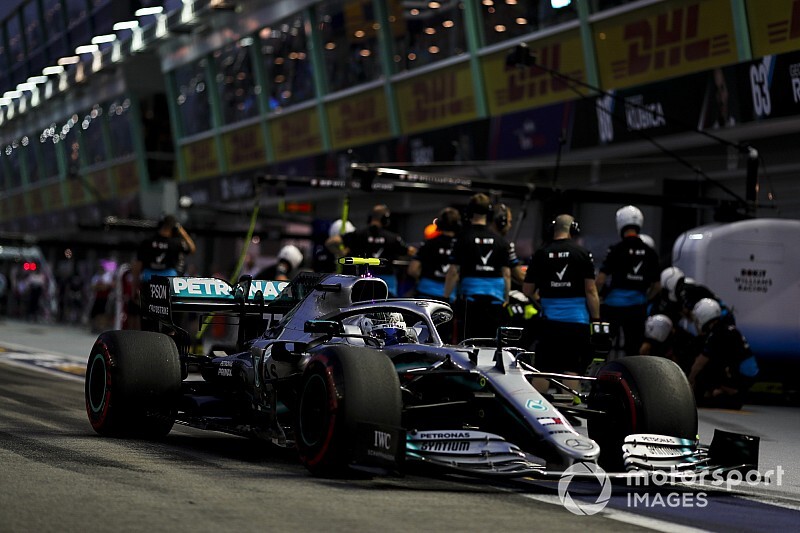 Valtteri Bottas says Mercedes needs to learn, forget and quickly move on from a Singapore Grand Prix weekend in which he was compromised by a qualifying mix-up.

While rival Ferrari enjoyed a resurgence in form to deliver a 1-2 finish, Mercedes had a more difficult weekend – with Bottas’ qualifying efforts compromised by teammate Lewis Hamilton, and then both drivers missing out on podium chances thanks to strategy calls in the race.

Bottas said that it is important that during a planned visit to the Mercedes factory on Tuesday the team goes through exactly what went wrong to ensure there is no repeat, but then must focus on getting things spot on in Russia.

“We’ll have a good review of the race,” he said. “As a team we’ll be again, as always, very open about everything that happened strategy-wise. Obviously with such a quick turnaround you can’t do much with the car. The only thing is pretty much with the set-up and maybe some small bits here and there.

“But it’s mainly taking the points to learn from this weekend and it’s going to be a weekend to learn and then forget and move on.

“We get to Russia and start from zero and try to remember those good feelings from years before. We need to try to find that same flow I’ve been able to find there before.”

One thing that can definitely be improved is avoiding the kind of situations that happened in qualifying, when Bottas found his preparation lap for qualifying compromised when he was overtaken by Hamilton.

Asked if Mercedes needs to change qualifying procedures, Bottas said: “Well we have a clear procedure and I was supposed to be ahead, but it didn’t happen.

“I think maybe there is something we can learn – if one of use wants to do [something different],” he said. “It’s still something that is quite tricky and I guess we’ll see in the future how it goes. But we have clear rules for that and that didn’t go as planned.

“Every qualifying is so different, and sometimes there is no issue at all to get the tyres to work – sometimes you actually want the tow. But it’s a special track [in Singapore] where you just want as big a gap as possible to the car ahead. There’s not much I can say about that.”

Mercedes boss Toto Wolff is confident, however, that the qualifying matter can be easily resolved, and thinks what happened in Singapore came down to a confusing situation.

“Lewis was thinking that Valtteri was doing a slow out-lap and Lewis felt that a quick out-lap would suit him better, and that's why he went for the gap, which is not how we've done it in the past.

“We talked about it immediately afterwards, and everything's okay, it's all in a good place. That had no effect on the race. I think there were many more powerful things that went wrong this weekend.”