Bottas insists he's not in "support role" for Hamilton 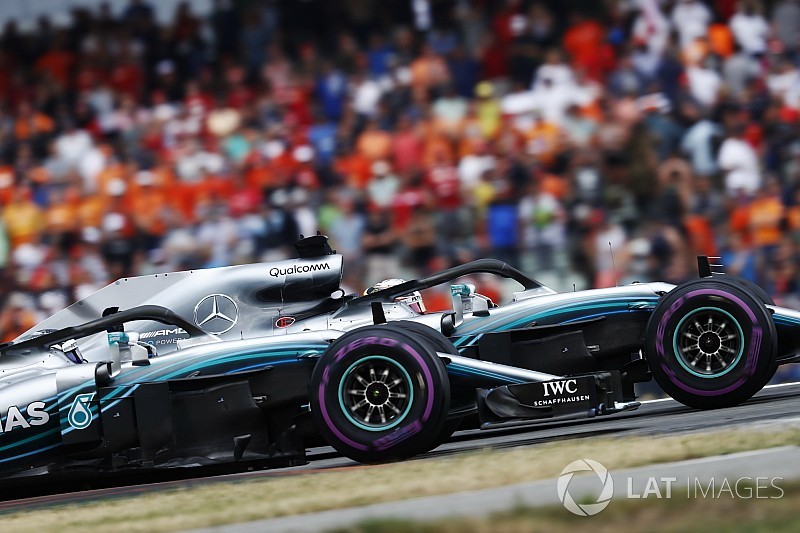 Valtteri Bottas insists that he is not cast to play a supporting role to Lewis Hamilton just yet, despite being given a team order to hold position in the closing stages of the German Grand Prix.

The Finn had been challenging his Mercedes teammate for the lead after the safety car restart at Hockenheim last week, and even managed to get alongside him on the run down to the hairpin.

But before the end of the lap, Mercedes strategy chief James Vowles came on the radio and told Bottas to call off the fight and maintain his second position.

The decision to impose team orders was later explained by the team as being motivated not by Hamilton title thoughts, but by the desire not to risk a collision that could cost the team points on a day when main rival Sebastian Vettel had crashed.

Speaking ahead of the Hungarian GP, Bottas said that there had been no policy shift in the team and that he remained free to fight for wins.

"I do believe we are still allowed to race freely," he explained. "Obviously it always goes case by case, but there is no plan at the moment for me to be in a support role.

"We are still on equal terms and that is the plan for now and hopefully it will continue to the end of the year.

"What happened, with all the difficult races we had in the triple header, we lost so many points with different causes, so I kind of get the team's decision after lap one.

"We were side-by-side and they wanted to get those points. I am confident they would have done the same if I was in the lead at that point."

Bottas also explained that he never received any instructions about not letting Hamilton get too far ahead, with the Briton having been urged by his team to push until the chequered flag just in case he later got handed a penalty for cutting across the pitlane entry.

"I wasn't aware of his pitstop situation, that he had to go over the line," said Bottas. "That is why I wasn't really trying to be in one second because everything was set by us then."

Consistency "the magic word" for Grosjean's future at Haas