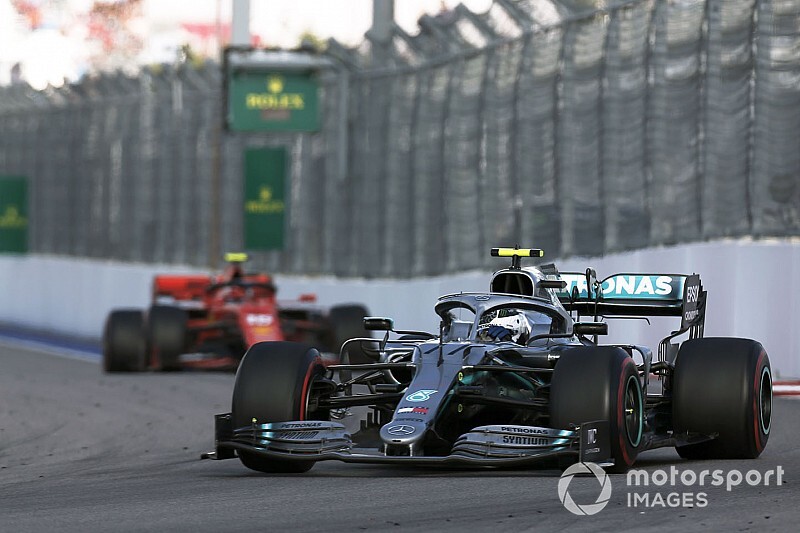 Mercedes Formula 1 driver Valtteri Bottas says it took a miracle to beat Ferrari and secure a one-two finish in Russia, but stresses that his team had to do everything right in order to benefit.

A safety car after Sebastian Vettel retired allowed Lewis Hamilton to jump ahead of erstwhile leader Charles Leclerc, while Bottas was able to move up to second when Leclerc made an extra tyre stop.

As Hamilton drove to victory Leclerc pushed Bottas all the way to the flag, although he was not able to find a way past.

“They had a strong car today, good pace and, as we’ve seen this year, they’ve been extra quick on the straights,” said Bottas of Ferrari.

“So I knew if they get close enough, especially in sector three, they are going to be a big threat into Turn 2. Just really had to try to keep it together, try to minimise the mistakes and the car felt pretty decent today, especially with the soft tyre in the corners.

“To be in that position [Mercedes ended up in] beforehand, I think the team did all the right things. Already the decision to start on the mediums to go long in the first stint, you start to hope for that VSC or safety car to come – and today it came, like a miracle.”

Mercedes team boss Toto Wolff agreed that the decision to use medium tyres in Q2 – thus creating flexibility with a long first stint – was the key to the victory.

“It was crucial, because one of the things that we were looking for or that we were hoping for was a late safety car,” said Wolff. “And only the medium was able to extend the stint, and that’s what happened, caused by their car failing.

“Their straightline performance is certainly a big factor in their current level of performance, and Valtteri just did a brilliant job in holding him [Leclerc] behind him and had the pace through the corners to just edge out of the main straight before the DRS was allowed.

“And it was two-three laps that Valtteri was able to hang on, and probably Charles’s tyres were shot.

“I think probably, if we are looking at it in an optimistic way, we are equal on pace, but with my half-empty glass, probably they were the quickest car in qualifying and in the race.”

Wolff conceded that without the safety car Mercedes would have followed Ferrari home.

“I think we had good pace at the beginning, Lewis was able to hang on to Charles, the Ferraris were pushing each other very strong and very hard, and I think we would have gone onto the soft for the last 25 laps and been on a soft against a medium.

“Realistically, you must say, I think it would have probably been enough to follow the gearbox, like in the last few races. But not enough.”

Asked by Motorsport.com if only way to beat Ferrari at the moment was with ploys like offset tyre strategies Wolff said: “First, we have to fix our performance. You can still fight as hard as you can, but if it’s not a level playing field then you’ve got to step up. Until then, you just have to give it everything, and this is what we did today.

“I think, in the moment of joy now, we need to be self-aware now - from pure speed, we didn’t have the performance this weekend. And there are many areas on which we need to work on to get our performance levels back.

“But equally the Sunday result shows you must never give up, even if you go into the race with a package that is not the quickest. If you do things right, all of those things, the drivers, the engineers and the management, then you can still win races. You’ve got to finish.”